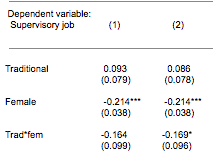 Unless you're partial to linear probability models, I would also suggest fitting a maximum likelihood logit model.

Now how can I compare the likelihood of a supervisory job for traditional men vs traditional woman, should I then add trad*fem + female?

You're on the right track. First, to get a precise estimate, you should also report your intercept.

The interaction shows how the effect of traditional values on obtaining a supervisory position is modified by gender. All you have to do is keep track of which dummies are turned 'on/off' as you interpret your model.

This is your estimate of the probability of a traditional male landing a supervisory job. Now, you correctly note that a female with traditional values is the effect when $\text{Traditional = 1}$ and $\text{Female = 1}$, so you should assess the combined effect of these two coefficients.

The main effect of being a non-traditional female is negative (i.e., -0.214). You can think of this as offsetting the male intercept. In non-technical terms, females start with a lower probability. The interaction of the traditionalist variable with gender, though, further offsets the effect of being female. Here is the final derivation:

In sum, these estimates allow you to compare traditionalist men with traditionalist women. Your model suggests non-traditional women have a lower probability of securing a management position, and their chances are further reduced if they espouse traditional values.

Not the answer you're looking for? Browse other questions tagged regression interaction regression-coefficients stata categorical-encoding or ask your own question.

24
Understanding Simpson's paradox: Andrew Gelman's example with regressing income on sex and height
5
Dummy variable interaction
0
Interpretation of dummies (several variables and categories!)
0
Multicollinearity with Interaction (high VIF)
3
three-way-interaction between two continuous and one binary variable using OLS stata
1
Which tests to run for this interesting study about discrimination?
1
Main effects are not significant anymore after adding interaction terms in my linear regression
0
How to Describe Interaction Between Variables
0
Regression interaction terms in stata