Measuring the causal impact of a policy that is not binding

This may be a little tricky because it's difficult to explain but bear with me. Assume a new policy implemented in 2015 which is a new requirement for firms, let's say for instance that the requirement is to buy some insurance if they hold specific assets, something that was not necessary to do before this policy.

Firms can either simply start buying this insurance as required, or if they don't want to pay the insurance, they can stop using these assets.

Now I want to study whether we observe different dynamics in the balance sheet of firms (let's call this variable $Y_{i}$ for firm $i$) that have the insurance in 2019 vs. those that do not.

Let $I$ be the variable of whether a company takes the insurance policy or not, and let $Y$ be the effect you wish to measure. Let $U_Y$ be the exogenous variable giving rise to the error term. Then a causal diagram for you situation would be like this: 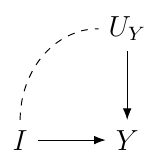 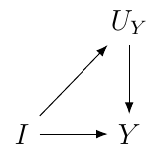 In this case, there is no endogeneity problem at all, because there is no backdoor path from $I$ to $Y.$ On the other hand, you could have this: 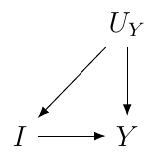 Now you have a backdoor path from $I$ to $Y,$ and you have an endogeneity problem.

Given that (I assume) you have not measured $U_Y,$ you are likely going to need to adjust for it somehow or other, just in case it is a problem. In that case, you have two options of which I am aware. The first is instrumental variables. The idea is this: introduce another measured variable $Z$ that has $I$ as its child, and does NOT have $U_Y$ or $Y$ as its child: 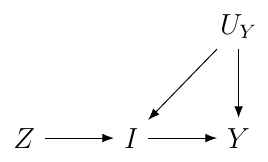 Then you find ratios of regression coefficients to find the right causal effect of $I$ on $Y,$ a procedure outlined on pages 85-88 of Causal Inference in Statistics: A Primer, by Pearl, Glymour, and Jewell.

The second approach would be to insert a measured variable $Z$ in-between $I$ and $Y$ thus: 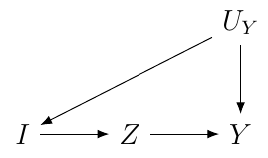 Not the answer you're looking for? Browse other questions tagged least-squares linear-model causality difference-in-difference endogeneity or ask your own question.

0
Instrumental variable
0
Why are my coefficients too large when control variables are not added?
1
Difference-in-Difference regression setup with multiple time frames
3
Testing pre-trend in DID
5
How to plot the graph or perform a formal test of parallel trends for generalized DiD?
3
A doubt on different ways of performing staggered DID?