I am dealing with linear data with outliers, some of which are at more the 5 standard deviations away from the estimated regression line. I'm looking for a linear regression technique that reduces the influence of these points.

So far what I did is to estimate the regression line with all the data, then discard the data point with very large squared residuals (say the top 10%) and repeated the regression without those points.

In the literature there are lots of possible approaches: least trimmed squares, quantile regression , m-estimators, etc. I really don't know which approach I should try, so I'm looking for suggestions. The important for me is that the chosen method should be fast because the robust regression will be computed at each step of an optimization routine. Thanks a lot!

If your data contains a single outlier, then it can be found reliably using the approach you suggest (without the iterations though). A formal approach to this is

For finding more than one outlier, for many years, the leading method was the so-called $M$-estimation family of approach. This is a rather broad family of estimators that includes Huber's $M$ estimator of regression, Koenker's L1 regression as well as the approach proposed by Procastinator in his comment to your question. The $M$ estimators with convex $\rho$ functions have the advantage that they have about the same numerical complexity as a regular regression estimation. The big disadvantage is that they can only reliably find the outliers if:

You can find good implementation of $M$ ($l_1$) estimates of regression in the robustbase (quantreg) R package.

If your data contains more than $\lfloor\frac{n}{p+1}\rfloor$ outlier potentially also outlying on the design space, then, finding them amounts to solving a combinatorial problem (equivalently the solution to an $M$ estimator with re-decending/non-convex $\rho$ function).

In the last 20 years (and specially last 10) a large body of fast and reliable outlier detection algorithms have been designed to approximately solve this combinatorial problem. These are now widely implemented in the most popular statistical packages (R, Matlab, SAS, STATA,...).

Nonetheless, the numerical complexity of finding outliers with these approaches is typically of order $O(2^p)$. Most algorithm can be used in practice for values of $p$ in the mid teens. Typically these algorithms are linear in $n$ (the number of observations) so the number of observation isn't an issue. A big advantage is that most of these algorithms are embarrassingly parallel. More recently, many approaches specifically designed for higher dimensional data have been proposed.

Given that you did not specify $p$ in your question, I will list some references for the case $p<20$. Here are some papers that explain this in greater details in these series of review articles:

A recent reference book on the problem of outlier identification is:

These (and many other variations of these) methods are implemented (among other) in the robustbase R package.

For simple regression (single x), there's something to be said for the Theil-Sen line in terms of robustness to y-outliers and to influential points as well as generally good efficiency (at the normal) compared to LS for the slope. The breakdown point for the slope is nearly 30%; as long as the intercept (there are a variety of possible intercepts people have used) doesn't have a lower breakdown, the whole procedure copes with a sizable fraction of contamination quite well.

Edit: user603 asked for an advantage of Theil regression over L1 regression. The answer is the other thing I mentioned - influential points: 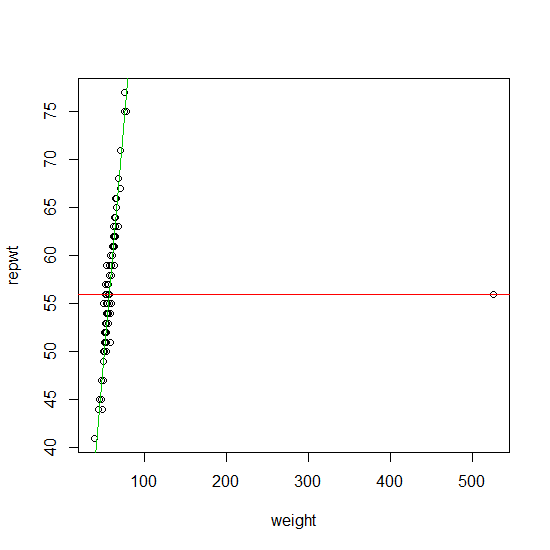 Have you looked at RANSAC (Wikipedia)?

This should be good at computing a reasonable linear model even when there are a lot of outliers and noise, as it is built on the assumption that only part of the data will actually belong to the mechanism.

I found the $l_1$ penalized error regression best. You can also use it iteratively and reweight samples, which are not very consistent with the solution. The basic idea is to augment your model with errors: $$y=Ax+e$$ where $e$ is the unknown error vector. Now you perform the regression on $$\parallel y-Ax-e \parallel_2^2+ \lambda \parallel e \parallel_1$$. Interestingly you can of course use "fused lasso" for this when you can estimate the certainty of your measurements in advance and put this as weighting into $$W=diag(w_i)$$ and to solve the new slighty different task $$\parallel y-Ax-e \parallel_2^2 + \lambda \parallel W e \parallel_1$$

Not the answer you're looking for? Browse other questions tagged regression linear-model outliers robust fused-lasso or ask your own question.

28
If linear regression is related to Pearson's correlation, are there any regression techniques related to Kendall's and Spearman's correlations?
21
Why does the L2 norm loss have a unique solution and the L1 norm loss have possibly multiple solutions?
12
When would least squares be a bad idea?
11
Outlier detection using regression
8
Choice between different robust regressions in R
7
What is the maximum likelihood/GLM version of least absolute deviations for robust linear regression?
2
How to optimize a regression by removing 10% "worst" data points?
4
Quantile regression vs. Li's regression: which should I use, and when?
4
Other ways to find line of "best" fit
3
Theil-Sen estimator assumptions
See more linked questions

10
Robust mean estimation with O(1) update efficiency
3
Robust distribution fitting?
1
How to detect regression outliers when many residuals are zero
8
Robust monotonic regression in R
2
If we are taught to not remove outliers without investigation, how do robust methods (median, trimmed mean) can be even suggested?
3
Difference between removing outliers and using Least Trimmed Squares?
4
Trimmed, weighted mean