I'm a bit confused with the definitions regarding causal inference. My question is whether we can call measured confounding an endogeneity problem?

I would say no. Confounding per se could be endogenous, or it might not be. But if the confounding variable is measured, then it's no longer endogeneity. Here's an example of endogenous confounding: 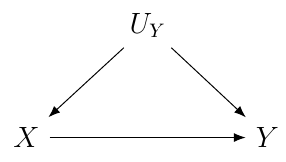 Here $U_Y$ is an exogenous variable that we will assume gives rise to the error term for $Y.$ $X$ is confounded with $U_Y,$ which is the definition of endogeneity. Typically, $U_Y$ is not measured. But you could have a similar-looking but quite different situation here: 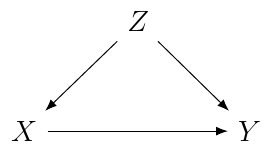 Not the answer you're looking for? Browse other questions tagged causality confounding endogeneity omitted-variable-bias or ask your own question.

0
Instrumental variable for problem of endogeneity
3
Meaning of “shared familial confounding” in a study
1
endogeneity in SEM
1
Can endogeneity problem be ignored in time series regression?
26
Can a confounding factor hide a possible causal relationship? (as opposed to find a spurious one)
4
Can I use matching weights to check that treatment endogeneity is eliminated after exact matching?
0
Endogeneity coming from omitted variable vs measurement error