I'm trying to estimate the mean response error associated with a measurement device (Device A) for concentration of a chemical in solution. The measurement device uses a disposable component whose performance can vary between different manufacturing lots of the component. Several test solutions were prepared in a lab by adding roughly-known quantities of solute to stock solutions whose true concentrations of solute are measured by another instrument (Device B) and only known to lie within a large interval (think taking several samples of ocean water from different locations, roughly measuring salt concentration with another device, then adding different quantities of salt to each sample).

Known variables are the following:

Note that jitter was added to scatter points horizontally at each level. 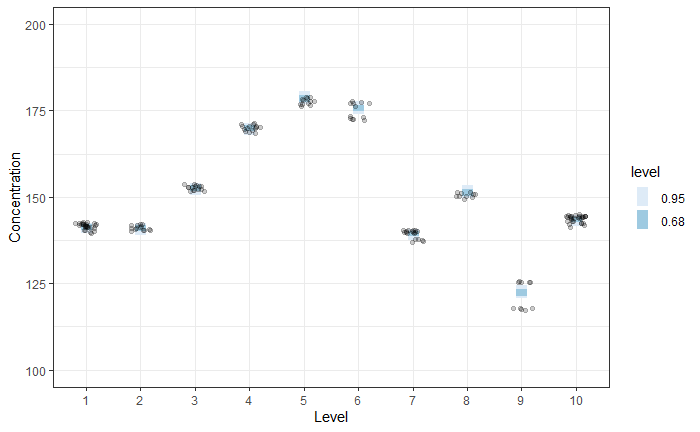 I need to determine the device measurement uncertainty as a continuous function of measured concentration (not just at each Level). However, all I know a priori about one level to the next is a very rough ballpark concentration - measurements made by Device B may be biased in addition to having large variance.

Is there some sort of modeling approach (maybe with latent variables) I could use for interpolating between Levels? The current practice is crude: it first estimates the mean and variance at each level, then assumes the mean as truth and interpolates variance between level means. But this seems like double-dipping the data and is questionable to me. Would an errors-in-variables model be still be appropriate, even given the potentially large bias Device B?

Browse other questions tagged measurement-error latent-variable errors-in-variables or ask your own question.