Conditional Indirect Effects and Then Probing

Turns out, in my analysis, the conditional indirect effect was significant (a1b3 path). I can claim a moderated mediation. I further probed the mediation at difference levels of the moderator. This yielded the following results: significant estimate at low value (1SD below) but not significant at medium or high values. I am confused at what my conclusions can be? We know there is moderated mediation; but what are the takeaways from this further probing?

Lastly, and this may require a separate question, but what is the difference between simple slopes and conditional indirect effect (as I have just explained). I would like to depict simple slopes for the moderating relationship (in this case between loneliness on PTSD-Depression) but this is not the same as the conditional indirect effect, correct? 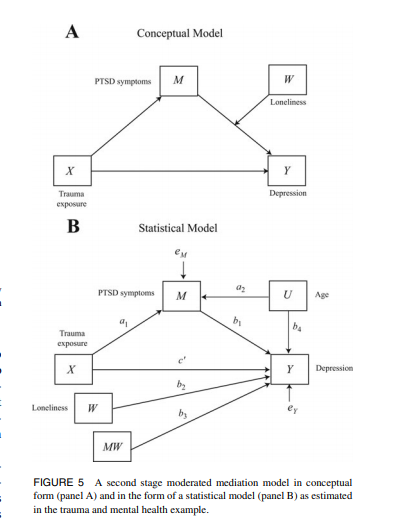 Browse other questions tagged interaction interpretation mediation path-model or ask your own question.

1
MODMED in PROCESS generates insignificant interaction term yet significant conditional effect: how to interpret?
0
Calculating SE for a path in Moderated Mediation
1
Index of Moderation Mediation vs Conditional indirect effects at values of the moderator