Estimating mean values given a histogram (without using median point)

I have a list of stock trades made by US senators and the exact amount of money they spend on a trade is not disclosed, they only give a range of values. Below is the frequency table for the 8600 trades. 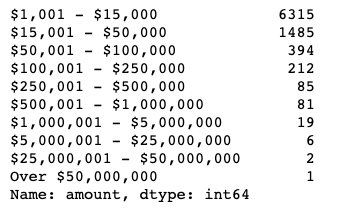 Here is a visual distribution 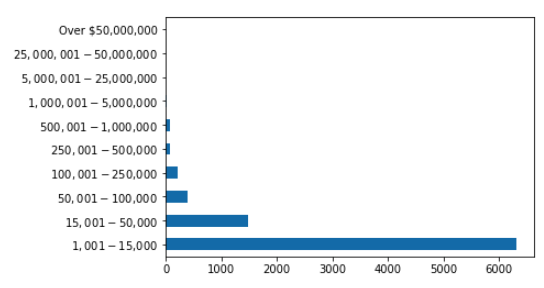 There is a clear trend in the histogram, which is why I am asking, what method I should use to approximate the mean value for each bucket? I would like to utilize this exponential trend instead of just using the midpoint of each bucket, as it is highly skewed.

My initial idea was to find a line of best fit for the histogram, and then integrate over each bucket and divide by the width of the bucket to find the mean of each bucket. Part of my goal for the project is to estimate how much money each trade makes.

The histogram doesn't help more than the table does already. The bins are roughly logarithmically spaced, but I would still focus on the table.

I am usually highly in favour of a graphical or geometric approach, but all the information is in the table any way. Graphical integration is in principle what you want but where does the integral stop?

I would estimate a weighted mean using the frequencies and the geometric mean of bin endpoints. For the one person in the top bin, try once with USD 50 million and once with say USD 100 million.

Assuming no measurement error (!) you can bracket estimates by assuming first that all people are at the lower end of their bin and then that they all are at the upper end. You still need some device for the uppermost bin.

I would note that even the median has to be guessed at with some ad hoc interpolation.

The calculations are, or should be, mundane. Recall that the geometric mean of two values is the square root of their product. Working with geometric means is equivalent to working on logarithmic scale. Here lower, geometric mean and upper values for each bin are used in weighted means, first with the uppermost bin just USD 50,000,001 and then with its upper limit that plus another USD 50 million. The results do underline how fraught is this exercise. A one-sentence summary would just be that the mean necessarily depends on the total and the total must in turn depend on the distribution within bins and most of all on the very largest value. (Stata output, although that doesn't matter.)

Not the answer you're looking for? Browse other questions tagged histogram exponential-distribution or ask your own question.