I am often told that the crucial difficulty in causal inference is that we only observe one value between $Y(1)$ and $Y(0)$ while we want to estimate $E[Y(1) - Y(0)]$. There is always an unobserved value.

From this perspective, causal inference is just two regression problems and needn't be treated as a special area. I am sure that there must be something wrong, but what is it?

regression causality
Share
Improve this question
edited May 4, 2020 at 15:19

A real-life example for how you run into problems: People with prior heart attacks take various drugs like beta blockers. The more severe the patient state, the more like it is that they are prescribed the drug. If you do not know all that much about patients and just take a bunch of patients with a heart attack in the recent past, you will find that people that take beta-blockers have worse outcomes (even though randomized trials show benefits from beta-blockers). This issue is called confounding by indication.

Appropriately dealing with that is what we are trying to deal with and formulating this problem in terms of counter-factual outcomes helps with understanding what is going on. Essentially, you need to take the prognosis for the patient (from the eyes of the treating phyiscian) into account. Very often, one big problem here is data availability. Even if you have some measurements available that you can somehow take into account as going into the prognosis, you may be missing out on information that is not captured in your database or is very hard to translate into something quantitative (e.g. free-text descriptions).

Your procedure would need to have some caveats with it, depending on the nature of the causal relationships present. 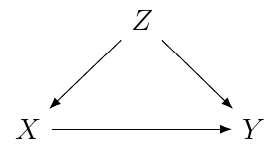 Here $Z$ sets up a backdoor path $X\leftarrow Z\to Y.$ If you regressed $Y=aX+\varepsilon,$ you would run afoul of the confounder $Z,$ and you would not obtain the correct causal relationship between $X$ and $Y.$ Assuming linear regression is the right way to go, you would need to include $Z$ in your regression: $Y=aX+bZ+\varepsilon.$ This effectively conditions on $Z,$ thus stopping information from flowing through the backdoor path. 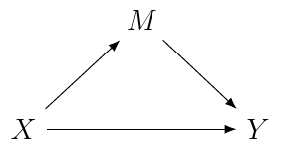 Now you have a mediator $M$, and if you were to regress (thinking the situation was the same as the confounder in Case 1) $Y=aX+bM+\varepsilon,$ again you would get the WRONG causal effect of $X$ on $Y.$ Why is that? Because there is no backdoor path from $X$ to $Y$ in this situation, and by conditioning on $M,$ you close off the additional effect that is mediated through $M.$ Incidentally, there are some significant counterfactual methods of analyzing mediators that are worth learning. See, e.g., Causal Inference in Statistics: A Primer, by Pearl, Glymour, and Jewell.

So traditional theories of regression do not talk about causality in this way, nor do they have the causal machinery of backdoor paths to inform when to include variables in the regression, or not.

Perhaps even more basic, is that regression by itself doesn't even tell you which variables are causes, and which are effects! You could regress $Y=mX+\varepsilon,$ thinking of $X$ as the cause and $Y$ as the effect, or you could regress $X=mY+\varepsilon,$ reversing the roles. How do you know which one is right? There's actually a theorem in Causality: Models, Reasoning, and Inference, by Pearl, Theorem 1.2.8, that applies here. It turns out that $X\to Y$ and $Y\to X$ are observationally equivalent: same skeleton, and same $v$-structures (non-existent), which implies the startling conclusion: you cannot statistically distinguish between $X\to Y$ and $Y\to X.$ In other words, data alone cannot help you decide which direction the arrow should be.

Finally, of course, the variables in question might not be related in a regression-style fashion at all. What if neither linear regression of any sort, nor logistic regression of any sort captures the relationship between $X$ and $Y?$ Example: finding the frequency $\omega$ in $$Y=a\cos(\omega T+\theta).$$ This is outside linear regression and logistic regression, because the desired coefficients do not show up linearly in the expression. But in this structural equation model, we are clearly thinking of $\theta$ as having a causal effect on $Y.$

The strategy you described is one way to estimate causal effects. It's called the parametric g-formula or regression estimation. See Snowden, Rose, and Mortimer (2011) for an introduction to using that method. This method estimates the average marginal effect of $Z$ on $Y$ after adjusting for $x$. There are many other methods to estimate the average marginal effect, including matching and weighting (with or without propensity scores). Nothing about using these methods is inherently causal. These are just methods of statistical adjustment that allow you to integrate over a distribution of covariates to arrive at a marginal effect estimate that has been purified of its relationship with the covariates.

Causal inference motivates the use of estimators like these because causal effects are often defined as average marginal effects. You don't need to appeal to causal inference notions to use these estimators, but they are generally of limited utility otherwise. The statistical properties of these methods don't depend on the causal assumptions that are often invoked to use them. In this sense, the development of statistical methods to estimate average marginal effects and related quantities that adjust for other covariates is not necessarily the task of the field of causal inference. It is the task of statistics, econometrics, and biostatistics.

The field of causal inference is concerned with enumerating the assumptions and conditions required to interpret an estimated relationship as causal. This includes developing an understanding of counterfactuals, confounding, causal graphs, threats to validity, generalizability, transportability, causal estimands, interference, mediation, measurement error, etc. Causal inference is an extremely broad and productive field that has made contributions far beyond just the statistical estimation of covariate-adjusted quantities. It is the field of causal inference that has linked statistical quantities to causal ones.

To specifically address the method you described, there are problems with it. What if you fail to correctly estimate the relationship between the covariates and the outcome? What if your covariates are measured with error? What if there is missing data in the covariates? What if the outcome is unobserved? What if there are multiple treatment periods? What if the variables you control for induce bias rather than reduce it? What if you haven't included the required variables to estimate the quantity of interest? What if you want your estimate to generalize to a population different from the one you have? What if the observed relationship exists only because of your sample selection strategy? Statistical methods have been developed to address all of these issues, and regression estimation cannot solve all of them. The area of statistics devoted to developing methods for causal inference has considered all of these problems and developed an ever-growing suite of methods to deal with them. It's often so much more complicated than a "simple specialized regression problem."

The other answers discuss how your specific suggestion may fail, but I think some higher level comments may help.

In general, to discover causal relations we need to intervene.

A classic example is the temperature - altitude relationship. We know the two are related (it's colder where it is higher), but how can we tell what is causing what? The gold standard is to run an experiment where we actually manipulate one and check the other. We will find that changing the altitude does change the temperature, but that changing the temperature does not change the altitude. This is the idea of counterfactuals - checking that 1) instantiating the cause produces the effect and 2) not instantiating the cause does not produce the effect (the sun still rises even after you remove the rooster).

An experiment where all variables were manipulated in all possible ways could allow us to identify causal relations. I would say that the crucial difficulty in establishing causation is that such comprehensive experiments are difficult to do. For example, there may be too many variables (just 10 binary variables have 1024 possible combinations), intervention may be very difficult (e.g. target a single cell while leaving all others unaffected), or unethical (to check whether smoking causes health problems would require forcing some people to smoke, checking whether health causes smoking we would requite manipulating peoples' health levels!).

Thus in practice we often try to discover causal relations from not-completely-random experiments and or purely observational data. Your suggestions is one way of trying to do that. It is quite reasonable but, as others have pointed out, only works in special situations. There are other methods to try and do this and it is an active field of research (see e.g. Mooji, Peters et al 2015 (Distinguishing cause from effect using observational data: methods and benchmarks)

Not the answer you're looking for? Browse other questions tagged regression causality or ask your own question.

1
What are key papers discussing causal inference from a missing data perspective?
1
Unbiased estimate for treatment effect in block randomized experiment where probability of treatment varies by block
4
What does it mean to "non-parametrically" identify a causal effect within the super-population perspective in causal inference?
2
Causal Inference with unconfoundedness
3
Causal inference for multiple treatments with an observed set of properties
3
Assumptions behind Synthetic Control Methods
0
Causal Inference for experiment