Are inconsistent estimators ever preferable? A twist

The thread "Are inconsistent estimators ever preferable?" and @whuber's answer in it shows that there exists an inconsistent estimator that can outperform a reasonable consistent one for all finite $n$, for a suitable loss function. @whuber's idea for constructing an example of interest is based on finding a loss function that is minimized not at the true parameter value but elsewhere. (Edit: the last sentence is incorrect.)

Edit: I misread @whuber's example. There, the loss function is minimized not only elsewhere but also at the true parameter value, contrary to my initial understanding. This makes my question lose ground. However, I have a related question.

In the previous question, the example by whuber was actually a cost function that was minimized when the estimate $t$ equals the true parameter value $t=\mu$, Namely it was zero for $\mu \leq t \leq \mu+1$, and thus at the minimum value for $t=\mu$.

Edit: The question has changed, but that example by whuber will still work, even when the minimum of the cost function is uniquely located at $t = \mu$. For instance consider this loss function:

The trick of that example is that the cost function had a discontinuity at the 'true parameter'.

If instead, the cost/loss function at the true parameter value $L(\mu)$ is continuous then the consistent estimator will approach this value (by the continuous mapping theorem)

(But maybe you should accurately define 'consistency' and 'dominate'/'outperform' because I can imagine discrepancies there, for instance consistent estimators with infinite variance, which will not dominate the variance of the error when compared with a biased estimator with finite variance)

In the plot below you can see that non-biased estimator is half the time negative (and for negative values the cost function is equal to one) which is why the expected value is >0.5 for any finite sample size. 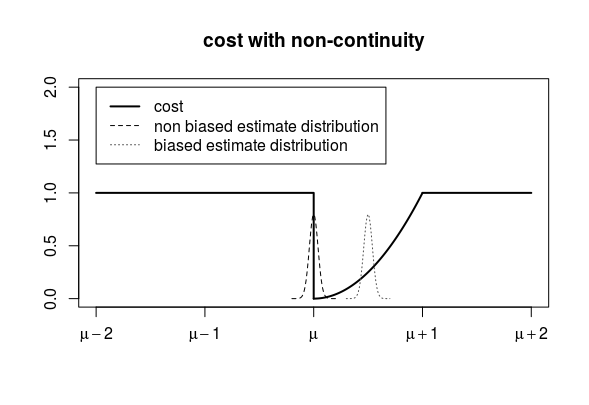 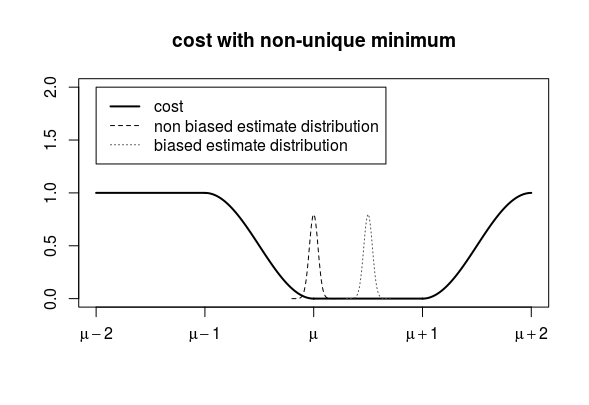 I also wish we had a better suited vocabulary to discuss these problems. Both of the estimators in your answer are "consistent", but for different targets

We could call a consistent estimator an estimator that gets as close to the target value as we like by increasing the sample size. (e.g. close measured by the variance of the difference with the target going to zero).

Thus these examples just show that if you use a naive estimator that does not take into account the shape of the loss function, like the sample mean, which is treating underestimation and overestimation in equal footing, then you can do better with a simple naive inconsistent estimator that adds the same constant all the time.

But this doesn't mean that you can't adjust the degree of overestimation according to sample size, and thus obtain a consistent estimator that still takes the asymmetric loss function into account.

In sum, the problem of the sample mean as an estimator in these examples is not about consistency at all. And the gains of the inconsistent estimator are also not due to its inconsistency.

34
Are inconsistent estimators ever preferable?
10
Are unbiased efficient estimators stochastically dominant over other (median) unbiased estimators?
5
Estimator that is optimal under all sensible loss (evaluation) functions