In a bagplot, the inner polygon, called the bag, is constructed using the Tukey depth. What is the intuition of Tukey depth and how is it calculated? A simple two-dimensional example with ten to twenty data points may be helpful. Further, how often is is Tukey depth utilised and what alternative methods are similar?

A bagplot is a method in robust statistics for visualizing two- or three-dimensional statistical data, analogous to the one-dimensional box plot. 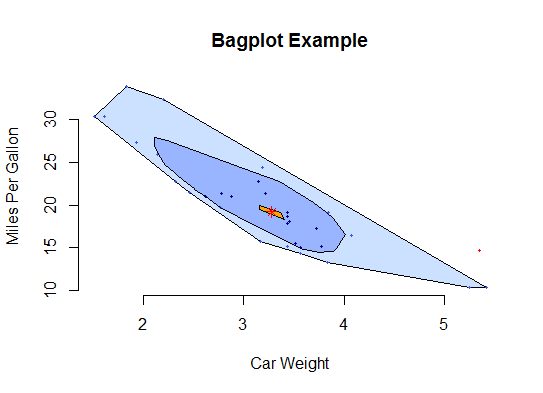 The bagplot consists of three nested polygons, called the "bag", the "fence", and the "loop". 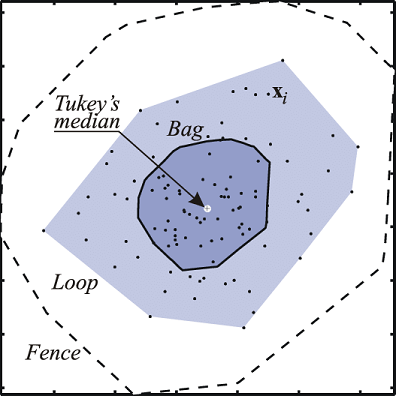 An asterisk symbol (*) near the center of the graph is used to mark the depth median, the point with the highest possible Tukey depth.

Many different algorithms have been developed to compute the Tukey depth of a point. This problem is equivalent to the $maximum feasible subsystem (MAX FS)$ problem which is a long-standing problem and has been extensively studied.

Suppose points in $S$ are in general position (no $d+1$ points of $S\cup\{p\}$ lie on a common hyperplane), an upper bound on the Tukey depth of $p$ can be obtained by selecting any non-trivial vector $v\in\mathbb{R}^d$ and computing the Tukey depth of $p.v$ in the one-dimensional point set

If $v$ is the inner-normal of the boundary of the halfspace $ℏ$ that defines the depth value of $p$, then

From this paper Absolute approximation of Tukey depth: Theory and experiments

Let $S$ be a set of $n$ points in general position in $\mathbb{R}^d$,$S^1$ be a subset of $d-1$ elements chosen at random and without replacement from $S, v$ be the vector perpendicular to the plane containing $S^1$ and another point $p$, $σ$ be an integer such that

Under point/hyperplane duality, the selection of $v$ is equivalent to selecting a random vertex in an arrangement of hyperplanes in $d-1$ dimensions. This selection of $v$ approximates $depth(p, S)$ to within $σ$ provided that the vertex is contained in a particular pseudo-ball of radius $σ$. Therefore the proof boils down to showing that the number of vertices of an arrangement in a pseudo-ball of radius $σ$ is sufficiently large. In particular, we show that the number of vertices in such a pseudo-ball is at least $(\begin{array}{c}\sigma+d-1\\d-1\end{array})$.

Not the answer you're looking for? Browse other questions tagged bivariate boxplot tukey-depth or ask your own question.

12
What is a 'bagplot', or 'bivariate boxplot'?
1
Convex hull version of density estimation (or lines of constant density)