A uniform sample can be random, right? I mean one can choose $n$ iid variables each one uniformly distributed on the set.

I know for uniform distribution, the PMF or PDF is constant, so each value is equally probable in discrete cases, but I'm having trouble connecting it with the uniform sampling. To be more explicit, assume that $S:=[0,1] \times [0,1] \subset \mathbb{R}^2.$ Say we'd like to sample $S$ uniformly, $n$ times. To me this means: we're taking values given by $n$ number of iid uniform random variables $\{X_1\dots X_n\} \in S$, and plot these values on the square $S.$ Now the intuitive picture I see everywhere is that $S$ is broken into a uniform grid of smaller squares to plot these values, and the samples belongs to the vertices of these squares. This is where I'm having trouble: (assume that the samples are iid random sample, but if not, please provide some argument)

1) Why do the samples have to appear in such a regular pattern: situated at the vertices of these smaller squares forming the grid?

REFERENCE: For the reference, please see : https://arxiv.org/pdf/1305.7255.pdf, e;g. in sec 2.5, ". We illustrate this with the well-known example of the “Swiss-roll with a hole” (Figure 1), a two dimensional strip with a rectangular hole, rolled up in three dimensions, sampled uniformly. " Or in the section before (same page): "for a **uniform sampling density on $\mathcal{M}.$"** In sec 5.1, " where the sampling density $\pi$ is not uniform on $\mathcal{M}$". Not sure what sampling density is, is it the pdf of the random variable?

machine-learning mathematical-statistics sampling sample uniform-distribution
Share
Improve this question
edited May 14, 2020 at 13:33
Mathmath
asked May 13, 2020 at 10:23

There are many (interrelated) questions here and not enough space to pursue all their implications. Let's therefore focus on a central idea, which I wish to state rigorously and generally, so I will begin with some definitions that cover the examples in the question (and much more).

First, we need to capture the idea of a "distribution" in some interval like $[0,1]\subset \mathbb R$ or a ball in $\mathbb{R}^n$ or even a finite set like $\{1,2,\ldots,n\}.$ We need to relate this to some kind of distance on these sets and we will need to focus attention on small neighborhoods of points within these sets. Here's my attempt, which generalizes the usual concept of a real-valued random variable:

Next, we need to create a framework to describe a sampling process that can become arbitrarily large. This is standard, but I will take the opportunity to count random points within neighborhoods in $T:$

Let's call such an iid sequence a "sampling process."

These simple definitions are enough to prove a far-reaching claim:

Before proving this claim, let's apply it to the questions.

Proof of the claim.

The claim is proven if we can show that for any integer $M$ and real number $\epsilon \gt 0,$ the chance that all the $N_i(t,\rho)$ in this sequence are bounded by $M$ is no greater than $\epsilon.$

Let's do some preliminary analysis before addressing this issue.

Return, now, to arbitrary $M$ and $\epsilon.$ By choosing any $n$ so large that

Although this applies only to any sufficiently large $n,$ it is enough for the proof, because the sequence $N_i(t,\rho)$ has independent increments. This means (among other things) that for integral $a\ge 1,$ $N_{an}(t,\rho)$ is the sum of $a$ iid variables having the same distribution as $N_n(t,\rho):$ namely, the count of the first $n$ of the $X_i$ plus the count of the next $n$ of the $X_i$ plus etc. The chance that $N_{an}(t,\rho)$ does not exceed $M$ exceeds the chance that all $a$ of these variables do not exceed $M,$ which (by independence) equals $(1-\epsilon)^a.$ The limit of this value, as $a$ grows large, is zero. Consequently, it is almost certain that at least one of these variables exceeds $M.$ But then all subsequent values of the $N_i(t,\rho),$ which can never be any less than the preceding counts, must all exceed $M,$ too.

In this rigorous sense we have the right to say

Every support point of a random variable $X$ is an accumulation point of the sampling process of $X.$

Unless this is a reserved term in some domains, uniform sampling means [for me] sampling from the Uniform distribution. Here is the outcome from an iid Uniform sample of size 1000 over the unit square: 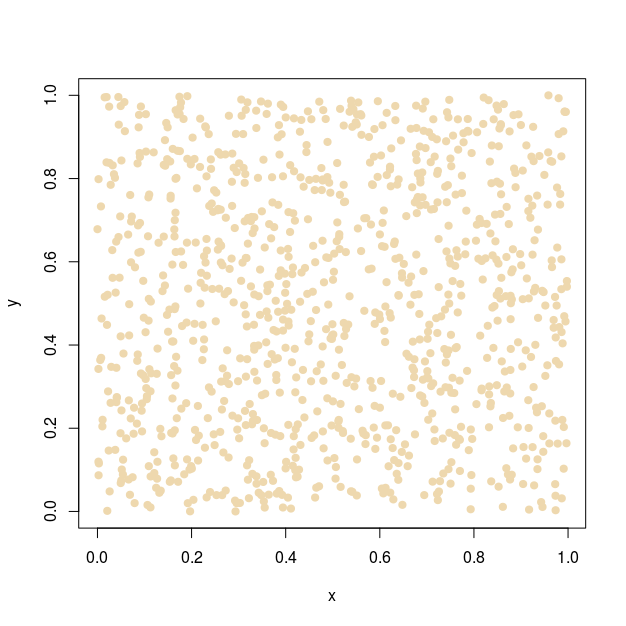 As clear from the above, the simulated points are irregularly located over that square. However, by simple virtue of the law of large numbers, the coverage of any subset of the unit square by the sample will converge to the surface of this subset.

Per a source, to quote:

The topic has been applied in many applications including signal processing and further involves finer points. To quote from Science Direct [EDIT] which comments directly on 'Uniform Sampling' [END EDIT], an example detailing a scheme applied to the parent population:

...sampled independently and uniformly from {1, …, n}×{1, …, n} with replacement. Then with high probability the sequence of iterates generated by (19) with a proper stepsize and the initial guess constructed by (25) converges linearly to a global minimizer,,,,

So, there can be much more implied in a uniform sampling scheme than simple random sampling (occurring here with replacement) per a uniform distribution. These include initial guesses likely to assess variation of important criteria of interest which further drives sampling size, sampling steps or systematic sampling procedures with an intent to achieve a convergence on an attribute of interest based on a metric.

Not the answer you're looking for? Browse other questions tagged machine-learning mathematical-statistics sampling sample uniform-distribution or ask your own question.

5
Importance sampling in mixed, discrete/continuous variables
3
Is it possible, practically, to sample any point on 0 to 1 under Uniform sampling?
9
Generate random numbers from "sloped uniform distribution" from mathematical theory
2
Measure that takes samples that is minimized in expectation for a uniformly-distributed random variable?
7
Expected min distance between N Uniform RVs
0
Sampling from a continuous 2 dimensional probability distribution function for importance sampling
2
Rejection sampling confusion
1
How to efficiently bias future samples?