Would you say this is a trade off between frequentist and Bayesian stats?

I'm trying to review frequentist and Bayesian in parallel. Let's say we are doing the typical scenario of estimating the population mean.

In bayesian stats, it seems like we HAVE to make an assumption about the shape of the population distribution so that we can use the likelihood function to generate a posterior distribution. Thus, we don't get the benefits of CLT when doing Bayesian analysis.

Would you say a tradeoff is, in frequentist, you get to use CLT, thus allowing you to tackle a wider range of problems - especially if you know the population is non-normal? For example, there's no burden of proof to show if the population follows a gamma or beta distribution since it doesn't matter.

This is not the tradeoff between Bayesian and frequentist statistics. The likelihood function describes the probability (density) of the observations given particular parameter values.

It is reversing the dependent and independent parameters in the function, but it remains the same function.

Common problems in probability theory refer to the probability of observations $x_1, x_2, ... , x_n$ given a certain model and given the parameters (let's call them $\theta$) involved. For instance the probabilities for specific situations in card games or dice games are often very straightforward.

However, in many practical situations we are dealing with an inverse situation (inferential statistics). That is: the observation $x_1, x_2, ... , x_k$ is given and now the model is unknown, or at least we do not know certain parameters $\theta$.

The central limit theorem, or any simplification of the probability of the observations $x$ as a function of the parameters $\theta$, $f(x \vert \theta)$, applies to Bayesian and frequentist statistics in the same way. Both methods use the function $f(x \vert \theta)$ as starting point and the simplifications based on the CLT are applied to that function. See for instance this article 'Bayesian synthetic likelihood' by Price, Drovandi, Lee and Nott as an example where the CLT is applied in Bayesian statistics.

The tradeoff between Bayesian and frequentist statistics is

The credible interval makes an improvement by including information about the marginal distribution of $\theta$ and in this way it will be able to make smaller intervals without giving up on the average coverage which is still $\alpha \%$. (But it becomes less reliable/fails when the additional assumption, about the prior, is not true)

The Bayesian and Frequentists methods condition their intervals on different scales. See for instance the differences in the conditional coverage for credible intervals (in the sense of highest posterior density interval) and confidence intervals 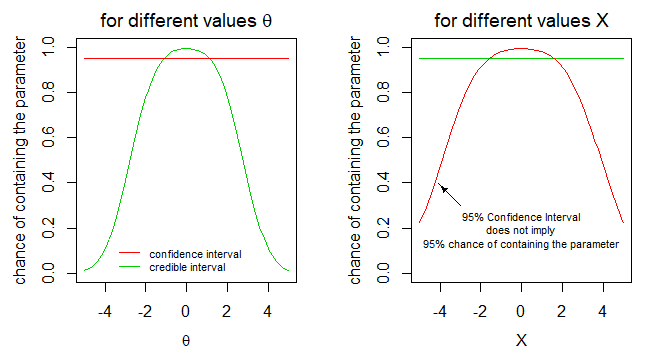 This relates to Why does a 95% Confidence Interval (CI) not imply a 95% chance of containing the mean?

The confidence interval is constructed in such a way that it has the same probability of containing the parameter, independent from the true parameter value.

The credible interval is constructed in such a way that it has the same probability of containing the parameter, independent from the observation.

The trade-off is that the credible (Bayesian) interval allows making predictions with smaller intervals (which is advantageous, by contrast, imagine making the prediction that the parameter value is between $-\infty$ and $\infty$). But... the credible interval depends on prior information.

While that is not a direct answer to your question, it might also be interesting to note that the posterior will also behave like a normal distribution in large samples, a result that used to be relevant before MCMC methods became widely available.

Paraphrasing the discussion in Greenberg, Introduction to Bayesian econometrics:

The exp-term is the (non-normalized) density of a normal distribution with expectation $\hat{\theta}$ and variance $v/n$. By "likelihood dominance" (by which I mean that the likelihood dominates the prior in large samples) we get kind of a Bayesian analogue to the asymptotic normality of an estimator.

I see issues with your reasoning before even getting to the Bayesian setup.

290
Why does a 95% Confidence Interval (CI) not imply a 95% chance of containing the mean?
96
Are there any examples where Bayesian credible intervals are obviously inferior to frequentist confidence intervals
48
Bayesian vs frequentist Interpretations of Probability
16
Does Bayesian statistics bypass the need for the sampling distribution?
8
How would a bayesian estimate a mean from a large sample?
10
Solution to German Tank Problem