How does an influence function-based estimator estimate a target functional for an unknown distribution?

How exactly does a "1-step" influence function-based estimator estimate a target functional (like average treatment effect) for an unknown distribution?

As described in Aaron Fisher and Edward H. Kennedy's tutorial (2019), the aim is to find an unbiased estimate of a functional $T(P)$ and its variance for an unknown distribution $P$ by approximating with a smoothed parametric estimate (or possibly nonparametric estimate using machine learning models) $T(\tilde{P})$ from the observed data.

The plots above are from Aaron Fisher and Edward H. Kennedy's tutorial (2019) on influence functions. Panel B illustrates how a Taylor series approximation is used to estimate a hypothetical $T(P)$ by a linear extrapolation from the slope (calculated using an influence function) at $T(\tilde{P})$ (that is, the $y$-intercept), where the solid line shows the path of the target functional value $P_{\epsilon}$ as we vary the weight $\epsilon \in [0,1]$.

The Taylor series expansion is then:

where $R_2$ is the second order term of the Taylor expansion.

About the convenient plot and the Taylor approximation

It is not the second order term of the Taylor expansion, instead it is the remainder term. Note that for this term $\epsilon \neq 1$, but $\epsilon = \bar{\epsilon}$.

The value $\bar{\epsilon}$ is undetermined but it must be some value between the boundaries (0 and 1).

You can see it alternatively as following: the remainder term $R_2$ of the taylor approximation is limited by the lower and upper limits of the second derivative $T^{\prime\prime}(P_\epsilon)$

and so there is some value $\bar\epsilon$ for the real value $T^{\prime\prime}(P_\bar{\epsilon})$ which is somewhere in between.

The exact path, the thick line remains unknown. We do not magically get it.

But we can know that the remainder term $R_2$, the difference between our linear estimate (the broken thin line thin) and the exact path, is relatively small (an error term that doesn't grow faster than the second derivative, which is for most smooth functions not so large).

Hoping to see a clear, intuitive explanation of how efficient influence curves are applied to initial probability distribution estimates (perhaps using nonparametric machine learning models) to arrive at an unbiased estimate of a target function.

It is the first time that I read about 1-step estimators, to my intuition it seems like some form of scoring algorithm where the score and fisher information are based the influence functions and an empirical distribution (how a change in the observation changes the parameter estimate can be inverted to how a change in the parameter changes the probability of observations, and related the likelihood function).

The practical example and computation below may provide some intuition:

In this example the target is to estimate for the population distribution function $f(x)$ the integrated squared density: 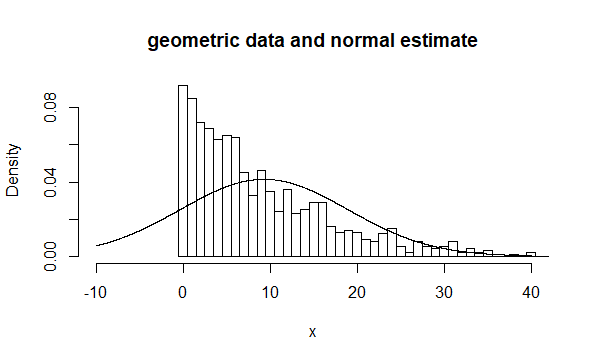 The effect is a reduction of the bias from using the normal distribution as an approximation for the distribution. We get an estimate that is more robust than our estimate with a (potentially biased) parameterized distribution.

In this case the plugin solution $\sum \hat{f}(x)^2$ is actually doing pretty well, and even better than the 1-step estimator. This is because the computation is done with a sample size of $n=100$ in which case the mass distribution $f(x)$ can be well estimated. But for a small sample there will be only a small amount of cases in each bin and we would have $\sum \hat{f}(x)^2 \approx \sum (1/n)^2 = 1/n$ and that's when the approximation with a parametric distribution (and the 1-step estimator for robustness) are useful. 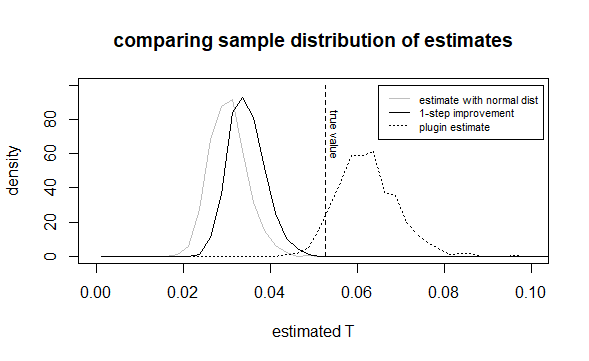 When $\epsilon =1$ you have the parametric estimate which may be biased, but the empirical estimate (when $\epsilon=0$) may be too sparse to correctly describe the true distribution function. Then the 1st order approximation, by using a Taylor approximation, is being used to blend the two together.

The influence functions describe the derivative of the functional as function of $\epsilon$.

Not the answer you're looking for? Browse other questions tagged nonparametric taylor-series influence-function or ask your own question.

3
How to use the bunching estimator to estimate the elasticity of taxable income
1
Powerful independence test for variables of unknown distribution
3
How can the parameters be unknown but the probability distribution be known?
0
How to use derivatives of a function to better estimate its variance over the domain?
3
How could I estimate the quantiles of an unknown CDF?