I have been asked to construct a linear model where yield is the response and all other variables are explanatory.

Here is how I constructed the model:

Where yi=yield, va=variety,clay= vector of soil variable where 1 if clay, 0 if other type of variable, and ra=rainfall.

So, now I'm asked to test the hypothesis that all of the varieties of wheat have the same effect on yield.

where $v_i$ is the parameter of variety $i$

for example I have this data:

So, I use the anova function that yields me this result: 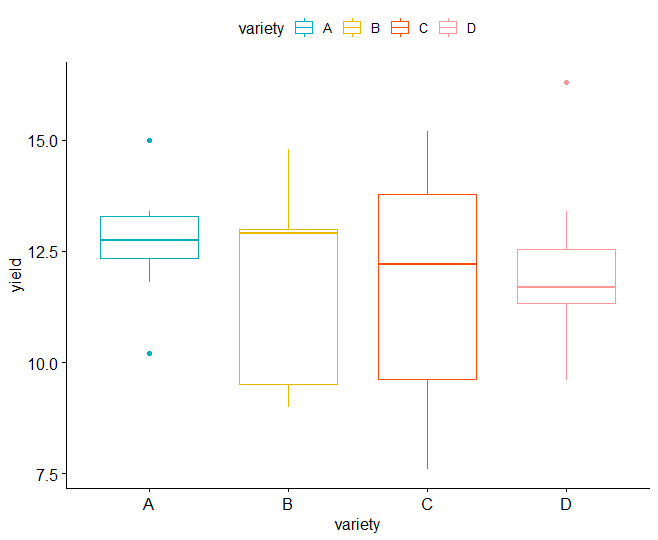 We say that we fail to reject the null hypothesis, we can never prove that it is true (and therefore should not "accept" it).

This is kind of like a "Not Guilty" verdict in a court. The defendant may be innocent, or there may just not be enough evidence (that the jury can consider) to convict. Similarly you do not have sufficient information in your data to say that there are differences in yield between the varieties, that could be because they are identical, it could also be because you just don't have enough evidence (data) to show the difference(s).

Post hoc follow-up can show how much difference could be reasonable given your data. If all the differences are small enough then you might conclude that the practical difference is too small to care about, but if they could be big enough to be interesting, then you really need more data to make a decision.

I have no problem with @GregSnow's answer (+1), However, from discussions in comments, it's not clear to me that you understand what one can and can't claim after doing a statistical analysis---especially when the result is not to reject the null hypothesis that all means are equal.

From what you show, it seems realistic to suppose:

Before you begin such an experiment it is good to know what you expect to find, the sizes of differences among means that you think it would be worthwhile to detect, and the probability that you will detect such differences using the sample sizes at hand. Using a 'power and sample size' procedure, I find that the experiment I have described above has only about probability $0.15 = 15\%$ of detecting differences of $1$ unit of yield.

Moreover, in order to have a 90% chance of detecting differences of $1$ unit you would need about $r=100$ replications per group (400 plots altogether) and for the same probability of detecting differences of $2$ units, you would need about $r = 25$ replications (100 altogether). If I am right about your experiment and expectations, this was a 'set-up' for disappointment from the start.

In a well-designed experiment, realistically detectable differences are about the same as practically important differences. If you really want/need to detect differences of 1 or 2 units, a noticeably larger (more expensive) experiment would be required. And unless there is a general consensus among people who grow and sell wheat that such small differences are genuinely of practical importance, it is difficult to imagine why anyone would want to run the larger experiment.

In fields of study where experimentation is cheap (or mindlessly subsidized), some researchers may be able to keep increasing the sizes of their experiments until they finally happen to get a P-value from some test that is below 5%. This is called "P-hacking" and it can lead to 'discovery' of effects that are not of practical importance or interest.

Examples: Here are examples of ANOVAs with simulated normal data. First, an 'under-powered' experiment with $r=10$ replications per level and, second, an experiment with $r=100.$ Of course, one experiment of each kind hardly proves my assertions above. But it happens that the experiments I ran performed as I supposed. The first fails to reject and the second finds highly significant differences.

Not the answer you're looking for? Browse other questions tagged r or ask your own question.

0
Reasoning for failure to reject $H_0$

36
Comparing two models using anova() function in R
3
How to determine effect of random factors and slopes and their variance in Mixed Model
6
Using the same variable as a fixed and random effect in Mixed Effect Models
7
Difference between anova and Anova function
0
ANOVA 3 factors: 2 fixed factors, 1 factor nested within crossed fixed factors
1
ANOVA with more than two factors
1
How to test whether $\beta_1= \beta_3 = 0.5$ using R (without using offset function)?
5
Whether to use factors in R and when ordered factors?