I am trying to get a deeper understanding of the various types of Bayesian networks.

It seems if you want to mix discrete and continuous variables in a hybrid network, then you have a few different scenarios to handle:

The other cases are numbing my brain. How does one go about specifying conditional probabilities of a given node when any of its parents are continuous?

Edit Terminology has been (hopefully) corrected based on feedback.

Regarding your actual question: How to calculate the conditional probabilities of a child node if the parents are continuous and the child node is a) discrete or b) continuous. I will to explain one approach using a concrete example, but I hope the general idea will be clear though. 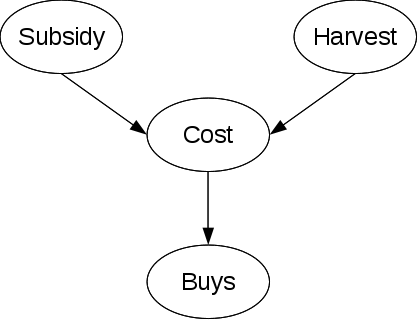 where subsidy and buys are discrete nodes meanwhile harvest and cost are continuous.

Details to 2.: Let's assume cost can be modeled using a normal distribution. In this case it is common to fix the variance and map the value of Harvest linearly to the mean of gaussian. The parent subsidy (binary) only add the constraint to create a separate distribution for subsidy=true and subsidy=false.

b) p(Buys|Cost) In this case on need to map the probability of occurrence of certain costs to the probability of Buy=True (p(Buy=False) = 1-p(Buy=True)). (Note that this is the same task as in logistic regression). One approach is if the parent has a normal distribution, to calculate the integral from 0 to x of a standard normal distribution, where x is the z-transformed value of the parent. In our example: $p(Buys=true|Cost=c) = integral(0,\frac{-c+\mu}{\sigma})$ with $\mu$=mean and $\sigma$=standard deviation of the Cost distribution. In this case $-c+\mu$ instead of $\mu-c$, because an observation (knowledge extracted from data !) is, that the lower the cost the more probable is a buy.

In the case of a non-binary discrete child-node, one approach is to transform the one multi-value-problem into multiple binary problems.

"Artificial Intelligence: A modern approach" by Russell and Norvig

If we are happy for some reason to assume that P(X | a) is Normal, so a contains its mean and its variance.

Consider case 1. Perhaps we are happy to assume that P(Y | X, b) is also Normal and that the conditional relationship is linear in X. Then b contains regression coefficients, as we normally understand them. That means here: an intercept, a slope parameter, and a conditional variance.

Now consider case 2. Perhaps we are willing to assume that P(Y | X, b) is Binomial and that the conditional relationship is linear in X. Then b contains the coefficients from a logistic regression model: here that means an intercept and a slope parameter.

In case 1 if we observe Y and try to infer X then we simply use Bayes theorem with the parametric assumptions noted above. The result is rather well known: the (posterior) mean of X given Y is a weighted average of the prior mean of X (gotten from a) and the observed value of Y, where the weights are a function of the standard deviations of X (from a) and Y given X (from b). More certainty about X pulls the posterior mean towards its mean.

In case 2 there may be no handy closed form for P(X | Y) so we might proceed by drawing a sample from P(X), making use of your assumptions about P(Y | X) and normalising the result. That is then a sample from P(X | Y).

In both cases, all we are doing is computing Bayes theorem, for which we need some parametric assumptions about the relevant distributions.

All this gets more complicated when you want to learn a and b, rather than assuming them, but that is, I think, beyond your question.

When thinking about continuous parents it may be helpful to think about generating data from the network. To make on data point form the network in case 1 (with the assumptions as above) we would first sample from P(X) - a Normal distribution - then take that value and generate a conditional distribution over Y by plugging the value we generated into the regression model of P(Y | X) as an independent variable. That conditional distribution is also Normal (by assumption) so we then sample a Y value from that distribution. We now have a new data point. The same process applies when P(Y | X) is a logistic regression model. The model gives us a probability of 1 vs. 0 given the value of X we sampled. We then sample from that distribution - essentially tossing a coin biased according to the model probabilities - and we have a new data point. When we think about inference in a Bayes net, we are, conceptually speaking, just reversing this process.

Not the answer you're looking for? Browse other questions tagged bayesian random-variable graphical-model conditional-probability prior or ask your own question.