When computing parameters, why is dimensions of hidden-output state of an LSTM-cell assumed same as the number of LSTM-cell?

If the LSTM input is 512-d (word embedding dimension), output hidden dimension is 256, and there are 256 lstm units (bidirectional layer) in each of the bidirectional LSTM layers, what's the params per cell and total in the layers?

I came across this link https://stackoverflow.com/questions/38080035/how-to-calculate-the-number-of-parameters-of-an-lstm-network, and it seems to suggest that hidden output state dimension = number of lstm cells in the layer. Why is that?

I came across this link https://stackoverflow.com/questions/38080035/how-to-calculate-the-number-of-parameters-of-an-lstm-network, and it seems to suggest that hidden output state dimension = number of lstm cells in the layer. Why is that?

For example, see this documentation page for Pytorch https://www.pytorch.org/docs/stable/nn.html. If we look at the output entry for an LSTM, the hidden state has shape (num_layers * num_directions, batch, hidden_size). So for a model with 1 layer, 1 direction (i.e. not bidirectional), and batch size 1, we have hidden_size floats in total.

As for counting the number of parameters in an LSTM model, see How can calculate number of weights in LSTM

Regarding the question: "why the dimension of the hidden state is related to the number of cells in a LSTM layer"?, what I understand, a layer of 4 cells would be represented as the picture I attached.

It is clear with the picture that the state H has dimension 4, which is directly related to the number of cells (hidden states) of the layer. I hope that clarifies the original question, and please correct me if I'm wrong. 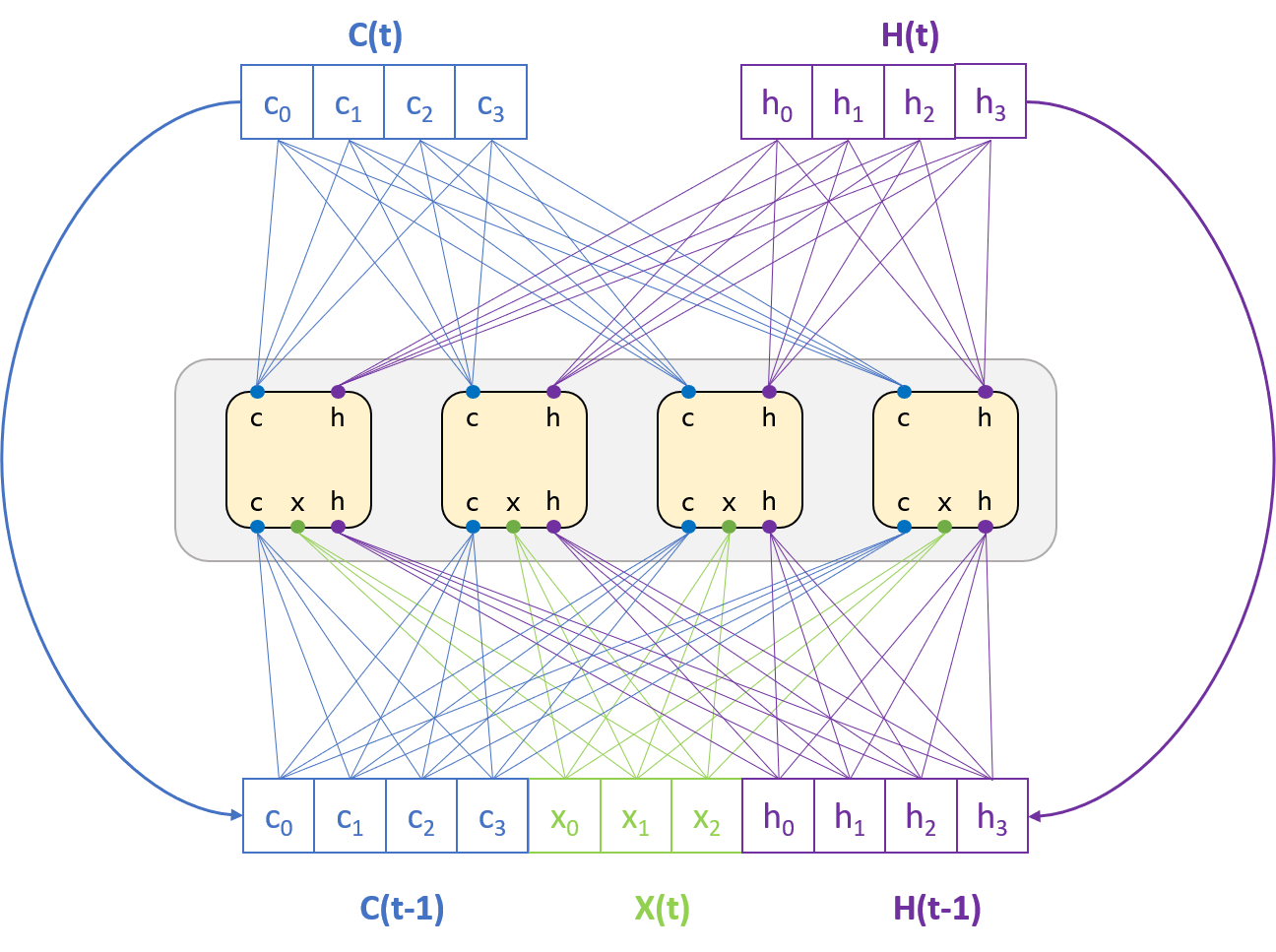 Not the answer you're looking for? Browse other questions tagged neural-networks lstm recurrent-neural-network word-embeddings or ask your own question.

8
What happens when we feed a 2D matrix to a LSTM layer
9
Understanding LSTM topology
1
Clarification on Number of LSTM cells per layer
2
What are nodes in RNN/LSTM?
15
Why do we need both cell state and hidden value in LSTM networks?
0
Why in LSTM cell the formula for the new hidden state applies activation function to the cell state without any transformation?
2
How does an LSTM process sequences longer than its memory?
1
Why do RNNs share weight?