How do I do basic hypothesis testing in a Bayesian framework?

This seems like it should be a widely-answered, but I've spent a lot of time searching and reading textbooks and have not been able to figure it out.

and look at the p-value (which I realize isn't actually the answer to my question, but that's frequentists for you). And if I want to know the interval there's a 95% chance the actual value is in, I just do:

But I want the Bayesian equivalents. Now I know I can compute a Beta distribution with a uniform prior and then use Monte Carlo sampling to figure out the answers, but that seems hackish and inefficient. What's the more direct way to compute the answer?

Well you could calculate the bivariate beta distribution of the posteriors of the 2 parameters (independent assumption seems reasonable), then find the distribution of the difference and see what the area greater than 0 is (or less than depending on the direction of interest).

Personally I think it would be more efficient (at least for me compared to looking up and remembering how to compute the distribution of the difference) to generate a bunch of observations from each of the beta posteriors, pair them up, and see what proportion have the one value in each pair being greater. Yes it is a bit hackish, but you make that sound like a bad thing when I don't think it is.

To take the second question first - what is a 95% credibility interval (no longer a confidence interval, now we are in the Bayesian world) for the probability that a person receiving the treatment will die (this seems to be the "actual value" you are calculating a confidence interval for in your line of code starting > pbar = A/N;).

This will generally give you similar results to your frequentist approach relying on the central limit theorem for the distribution of pbar to approximate normal, as in your code snippet. See for example: 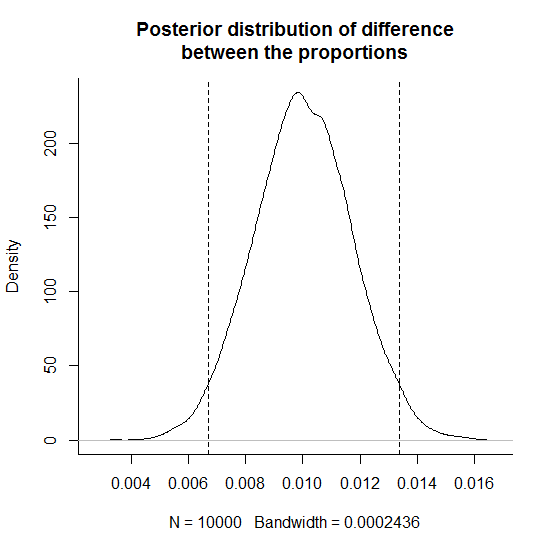 Your first question was about hypothesis testing. Typically choosing between two hypotheses is done by comparing the posterior and prior odds ratios of the two hypothesis ie by calculating the Bayes factor:

where z is the observed data.

From here it gets a little complicated. Exactly how the two hypotheses are formulated is important - in a case such as yours it will generally be necessary to have $H_1$ indicating the treatment proportion is more than a specified amount different than the original - because under the prior distribution of the continuous random variable p the chance of any exact equivalence of the two is zero (a problem with "sharp" hypotheses). I'd consult a text to see how this plays out, but hopefully this was enough to get you started.

Not the answer you're looking for? Browse other questions tagged hypothesis-testing bayesian or ask your own question.

38
What is the connection between credible regions and Bayesian hypothesis tests?