I'm evaluating a classifier performance on a hold out test set, using AUC (and other metrics).

I'm using bootstraps to calculate the confidence intervals of the metrics.

How should I calculate if there is a sigficance difference between two classifiers?

I was going to compare the two distributions (calculated independently). But I'm beginning to think I should calculate the distribution of the differences calculated using the same bootstrap sample for each classifier?

If you've bootstrapped out of sample performance for two models, you will obtain an approximation to the sampling distribution of the test statistic (here, the AUC). You can compute then compute the probability that one model's AUC is larger than the other using these samples. Shown below is an example using sklearn

Here is the result for such a procedure 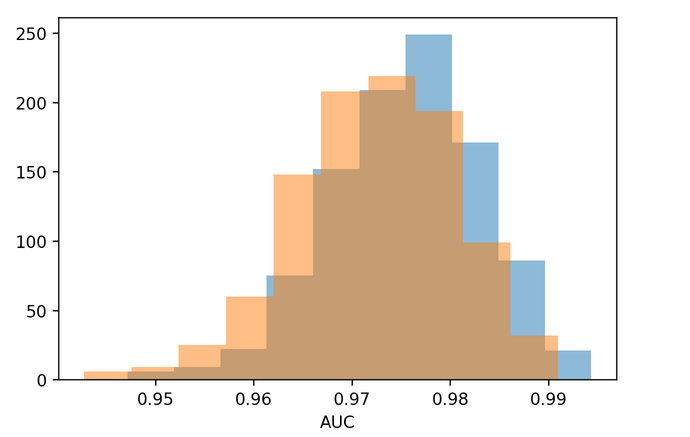 So the average difference in the AUC between the two models is on the order of 1e-3. Not a big difference. You could also determine the proportion of the pairs in which model_1 had a larger AUC using similar techniques. I think most people would interpret that as the probability that model_1 has a superior AUC as compared to model 2.

Finally, I would caution you in using AUC as a metric on which to choose models. If I have understood Frank Harrell correctly, the metric isn't sensitive enough to pick up on meaningful improvements between models. EDIT: See this comment by Frank for the fuller story. Thanks to Dave for finding that.

Not the answer you're looking for? Browse other questions tagged statistical-significance confidence-interval bootstrap model-evaluation or ask your own question.

43
How to choose between ROC AUC and F1 score?

5
Should I be concerned if the cells of values obtained from bootstrapping are correlated?
29
Cross-validation or bootstrapping to evaluate classification performance?
1
Evaluating a fixed classifier
0
Classifier statistical significance test
0
Overlapping Confidence Intervals and Statistical Significance - using bootstrapping
4
Get CI and p-values for cross validated performance measures (AUC, rho)
4
How did these researchers determine the confidence interval of the AUROC using resampling but without retraining the model?
1
What are the steps for generating bootstrap confidence intervals?