Here is a quick reproducible script to plot GAMs on the response scale instead of the "smooth" scale for a single term via the 'mgcv' R package.

I made the below script for a friend who is using GAMs for his PhD. work in evolutionary biology. I use the Hubble data from the 'gamair' R package simply as a demonstration.

The above script works like a charm. The difficulty arises when the GAM contains multiple terms, even though only a single term is plotted at a time.

Here 'z' is linear term (not a smooth term).

Could someone (@gavinsimpson?) provide a quick example of plotting such a GAM on the response scale?

I haven't been able to find such an example online or in Simon Wood's great book on GAMs and mgcv.

If the model contains z then the effect of x estimated by the model is that given z is in the model. Hence the fitted response is the additive sum of the two effects, and we can't talk generally about the estimated values of the response for a range of values of x without also stating the value of z.

For Gaussian models, you can just add on the intercept in plot.gam() to shift around the smooth curve on the y-axis. See argument shift to plot.gam(). This assumes that as per the example x and z are unrelated in the model, and furthermore some value of z (in this case I think 0 as it is a linear term not subject to identifiability constraints).

A more general solution is just to predict from the model at a grid of values over x while holding z constant at some representative value, say its mean or median.

Here's a full example of doing this by hand: 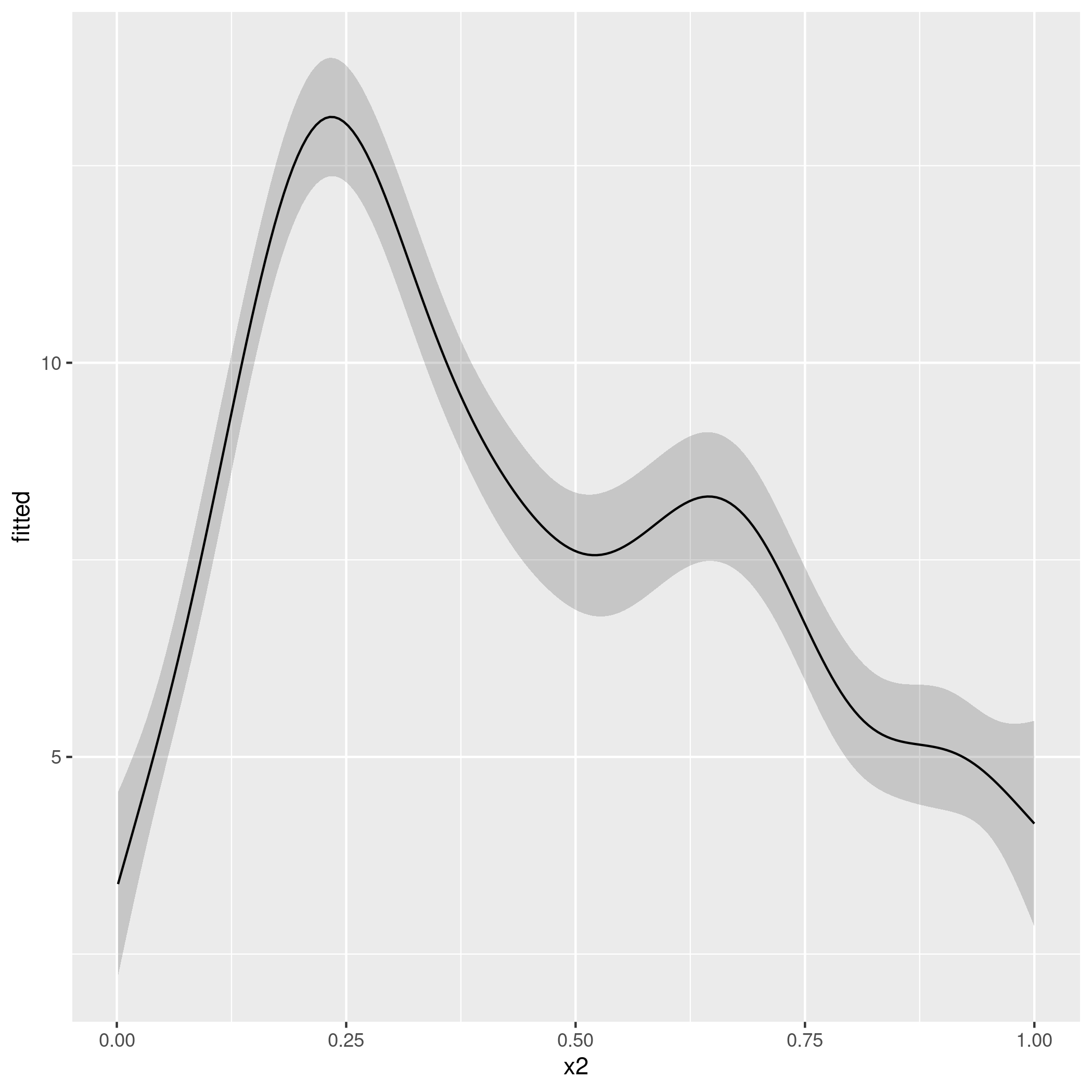 That script should be fine for any of the standard family options in mgcv, but you'll have to take careful note of what predict() returns for some of the fancier families in mgcv.

Not the answer you're looking for? Browse other questions tagged generalized-additive-model mgcv or ask your own question.

2
How to plot GAMs on the scale of the response with univariate smooths, interactions and random effects
2
Showing raw data behind smooths from GAMs with multiple predictors

2
GAM selection when both smooth and parametric terms are present
1
Interpretation of Tensor product splines with multiple terms and their standard errors
2
Use of random intercepts and slopes in combination with factor-smooth interaction
0
hypothesis testing with linear models and gams
2
How to plot GAMs on the scale of the response with univariate smooths, interactions and random effects
1
y-axis values in plot(gam)