I'm trying to describe the behavior of a scatter plot I have. I'm looking at the results of a game that occurs in rounds where one player is voted out each round. I'm trying to find a correlation between how many rounds Player A (who wins a particular advantage in the first round of each game) ultimately survives and how many people voted for the person Player A wanted out in the first round. There are 22 iterations of this game total, and each iteration has one data point because there is only one Player A per game. However, each iteration of this game has a different number of rounds, and a different number of people voting in the first round. 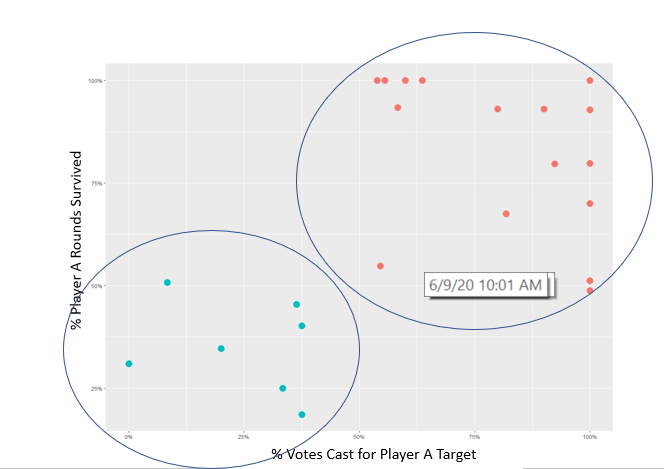 There are two distinct clusters that appeared, and the fact that there appears to be a negative correlation (r = ~0.349) in the top-right red cluster would be an interesting trend to note. However, I've done some reading on here that states that finding the pearson's r between two percentages is a bad statistical practice, even when the percentages are not compositional. My question has two parts -- 1) Would it be fair to say that there is a negative correlation in the red cluster? 2) Does anyone have suggestions for how to better perform this analysis if finding the correlation between the percentages is incorrect?

-ve correlation in red cluster appears to be an artefact. Linear correlation analysis doesn't seem to reflect the complex relationships in that cluster, especially the hard limit at 100% for both variables.

The non-100% points seem to have a positive correlation.

The small cluster on top around (60, 100) seems related. Could be some specific effect. If these points are removed, the rest of the points seem to have clear positive correlation.

Not the answer you're looking for? Browse other questions tagged correlation pearson-r percentage or ask your own question.

2
Hypothesis test for summary data involving percentages
5
How to compare two Pearson correlation coefficients
0
What's the difference between using total and percentages when you calculating correlations?
2
Probability that a random voter voted for the same candidate twice
2
Does averaging and averaging percentages make sense in this case?