What is the cleanest, easiest way to explain someone the concept of Kolmogorov Smirnov Test? What does it intuitively mean?

It's a concept that I have difficulty in articulating - especially when explaining to someone.

Can someone please explain it in terms of a graph and/or using simple examples?

The Kolmogorov-Smirnov test assesses the hypothesis that a random sample (of numerical data) came from a continuous distribution that was completely specified without referring to the data. 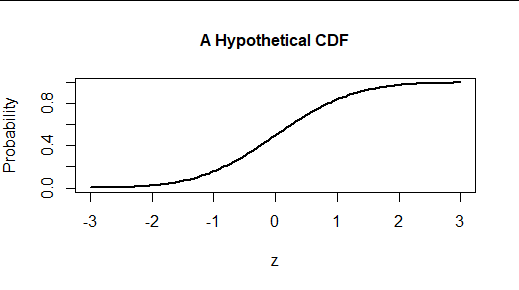 A sample can be fully described by its empirical (cumulative) distribution function, or ECDF. It plots the fraction of data less than or equal to the horizontal values. Thus, with a random sample of $n$ values, when we scan from left to right it jumps upwards by $1/n$ each time we cross a data value.

The next figure displays the ECDF for a sample of $n=10$ values taken from this distribution. The dot symbols locate the data. The lines are drawn to provide a visual connection among the points similar to the graph of the continuous CDF. 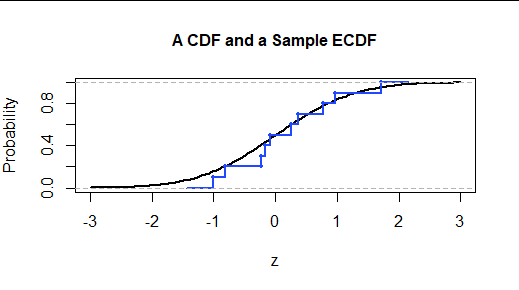 The K-S test compares the CDF to the ECDF using the greatest vertical difference between their graphs. The amount (a positive number) is the Kolmogorov-Smirnov test statistic.

We may visualize the KS test statistic by locating the data point situated furthest above or below the CDF. Here it is highlighted in red. The test statistic is the vertical distance between the extreme point and the value of the reference CDF. Two limiting curves, located this distance above and below the CDF, are drawn for reference. Thus, the ECDF lies between these curves and just touches at least one of them. 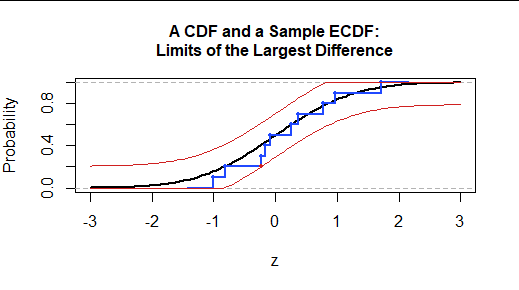 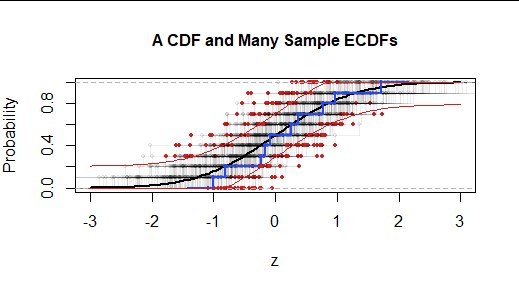 The ECDF of each of $200$ samples is shown along with a single red marker located where it departs the most from the hypothesized CDF. In this case it is evident that the original sample (in blue) departs less from the CDF than would most random samples. (73% of the random samples depart further from the CDF than does the blue sample. Visually, this means 73% of the red dots fall outside the region delimited by the two red curves.) Thus, we have (on this basis) no evidence to conclude our (blue) sample was not generated by this CDF. That is, the difference is "not statistically significant." 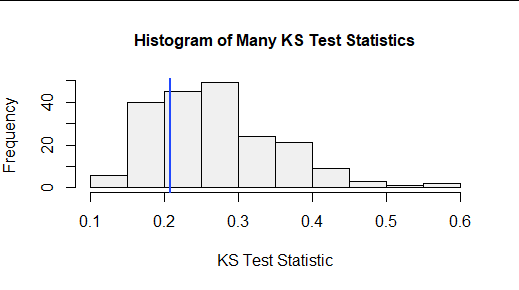 The vertical blue line locates the KS test statistic for the original sample. 27% of the random KS test statistics were smaller and 73% of the random statistics were greater. Scanning across, it looks like the KS statistic for a dataset (of this size, for this hypothesized CDF) would have to exceed 0.4 or so before we would conclude it is extremely large (and therefore constitutes significant evidence that the hypothesized CDF is incorrect).

Although much more can be said--in particular, about why KS test works the same way, and produces the same null distribution, for any continuous CDF--this is enough to understand the test and to use it together with probability plots to assess data distributions.

In response to requests, here is the essential R code I used for the calculations and plots. It uses the standard Normal distribution (pnorm) for the reference. The commented-out line established that my calculations agree with those of the built-in ks.test function. I had to modify its code in order to extract the specific data point contributing to the KS statistic.

The one-sample Kolmogorov-Smirnov test finds the largest vertical distance between a completely specified continuous hypothesized cdf and the empirical cdf.

The two-sample Kolmogorov-Smirnov test finds the largest vertical distance between the empirical cdfs for two samples.

There are "one-sided" (in a particular sense) versions of these tests, but these are relatively rarely used.

There is a related test when parameters are estimated in a location-scale family* (or a subset of location and scale), properly called a Lilliefors test (Lilliefors did three tests for the normal case and a test for the exponential case). This is not distribution-free.

* up to a monotonic transformation

You are looking for the maximum deviation of empirical CDF (built from observations) from the theoretical values. By definition it can't be larger than 1. 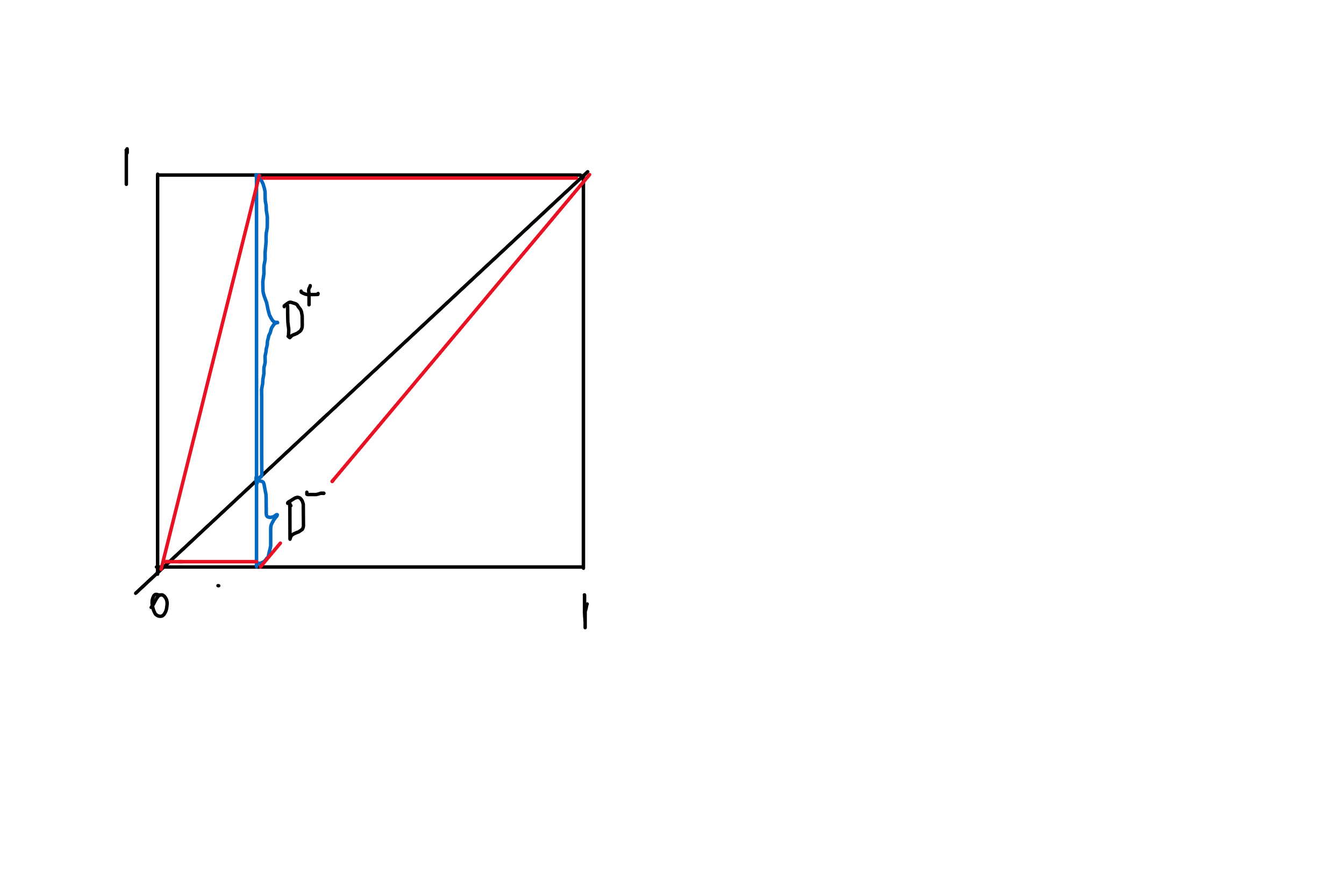 However, that's not what's amazing about KS statistic. It is that the distribution of $\sup_{x\in(-\infty,\infty)} D^+$ is the same for any distribution of data set! To me that's what you need to get intuitively if you can.

In the one-sample (goodness-of-fit) test, we assume that the data come from some distribution that has a particular CDF. The data also have an empirical CDF. If we are right, then the CDF of the data should dance around the CDF of the assumed distribution but stay close. If the dance partners get too far apart (in vertical distance), then we see that as evidence against our assumption.

In the two-sample test, we assume that two data sets come from the same distribution. If that is the case, then the two empirical CDFs should dance around each other but stay fairly close. If the dance partners get too far apart (again, in vertical distance), then we see that as evidence against our assumption.

283
What is the meaning of p values and t values in statistical tests?
28
Kolmogorov–Smirnov test vs. t-test
3
How can I verify that my solution is correct when finding the PDF and CDF of a random process?