Suppose I have two variables and that their dependency structure is Gaussian copula. Suppose that the parameter of the Gaussian copula is 0.8 and the corresponding Kendall's tau is 0.7. How can I interpret the result? How can I describe this dependency from the plot?

Can I said that there are strong correlation at the middle values while these two variables are not correlated at the tails. Also, can I said the relationship is positive which means that if the first variable increases then the second variables increases as well. If yes, why this increase is not apply for extremes. That is, saying the variables are increase together that means they also should increased even at the extremes. 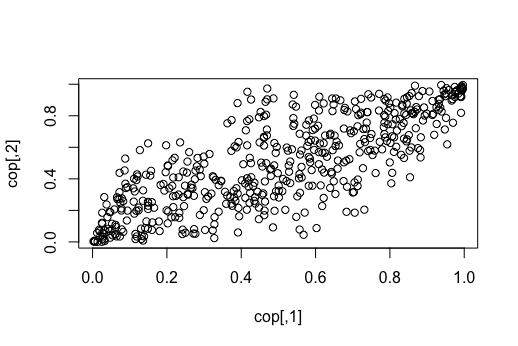 How rigorous do you want the exposition to be? In simple terms, even though we often talk about "dependence" and "correlation" in intuitive terms, they have formal definitions. In particular, Kendall's tau has a formal mathematical definition, and it measures the probability of concordance minus the probability of disconcordance, where concordance between $(X,Y)$ is defined as the probability that $X_1 > X_2$ and $Y_1 > Y_2$ jointly, where $(X_1,Y_1)$, $(X_2,Y_2)$ are independent random variables with the same distribution of $(X,Y)$. As such, even if $(X,Y)$ have a high value for kendall's tau, they can certainly have little concordance at the tails (or any other part of the distribution) as long as the mass of being at those parts are low enough. If I have no association at a certain part of the distribution, but the density is really low, then an overall measure of kendall's tau may say little about the dependence at certain areas.

To answer your question more explicitly, if you know that the copula is a Gaussian copula, then knowing the parameter $.8$ is in some sense all you need to know. A commonly studied feature of copulas is the upper (lower) tail dependence, which precisely measures the 'relationship' of the copula at the tails. It can be shown that for gaussian copulas, the tail dependence is $0$. So in some sense, this is why the correlation in the middle does not apply at the extremes--it has to do with your choice of copula. For a rigorous proof of this, and also an intuitive visualization, check out this post:

Generally, copulas measure arbitrarily complicated and intricate relationships, and there's no reason why correlation in the middle implies anything about correlation at the tails, and measures such as Kendall's tau provide information about the overall 'relationship.' Maybe not the best comparison, but it's sort of similar to how for a random variable, the mean and variance provide information about the variable, but it says little about tail behavior, and so just how tail dependence exits as a concept for copulas, so does concepts like kurtosis for a random variable.

Not the answer you're looking for? Browse other questions tagged normal-distribution copula or ask your own question.

19
Difference between multivariate standard normal distribution and Gaussian copula
3
How do we select the best copula family?
0
Copulas with tail dependence only when correlation non-zero?
0
Statistical prediction model with copula
2
Questions about the surface and counter plot of copula functions
0
Do copula describe multivariate distributions more accurately than their moments?