Here is my data I'm working with on R. I'm trying to conduct a logistic GLM regression. 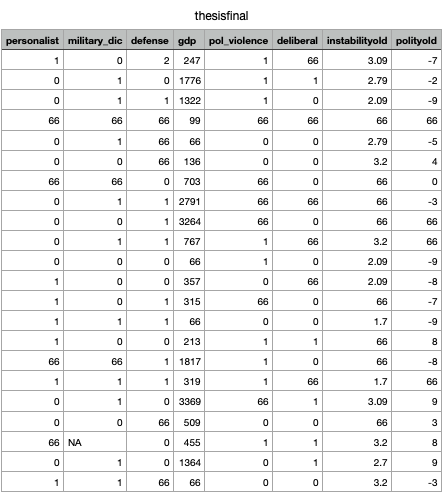 But I get this:

I dont understand why my model is unfit, or what I should do to fix the 0 in z value?

my independent variable military veto power is operationalized with the variable "defense" which expresses whether the defense minister is a military officer (then its coded as 1) if not, its coded 0.

the other variables are control variables, 2 of them (personalist and military_dic) are binary and are coded 1 if there is a personalist leader or a military leader, 0 if non.

gdp is self explanatory. instabilityold expresses instability rate from the year before, the higher the number the more instability

polityold is the polity iv democracy rate from the year before, the higher the number the stronger the democracy.

the values 66 and 2 are missing variables

This is not a full fledged answer but rather extends two of my comments above.

I am afraid that what you have (data) is not sufficient to do what you want (test roughly a dozend hypotheses).

Things are additionally complicated by the presence of missing values: Your current implicit strategy is to remove all rows with any missing value, leaving you with just about eight observations to fit models with about five parameters. Even if all assumptions of GLMs are fullfilled, its p values rely on large sample theory and might be quite wrong for small samples.

The best we can do is: