What is the probability of 4 person in group of 18 can have same birth month?

This is not a class assignment.

It so happened that 4 team members in my group of 18 happened to share same birth month. Lets say June. . What are the chances that this could happen. I'm trying to present this as a probability problem in our team meeting.

Here is my attempt:

Please note: I know that all months are not equal, but for simplicity lets assume all months have equal chance.

Unfortunately, there is no such simple argument for more than two coincident birthdays. There is only one way (up to symmetry) for $k$ people to have no two-way coincidence, but there are many, many ways to have no four-way coincidence, so the computation as you add people is not straightforward. That's why R provides pbirthday() and why it is still only an approximation. I'd certainly hope this wasn't a class assignment.

The reason your argument is not correct is that it undercounts the number of ways you can get 4 matching months. For example, it's not just that you can choose any month of the 12 as the matching one. You can also relabel the other 11 months arbitrarily (giving you a factor of 11! ). And your denominator of $12^{18}$ implies that the ordering of the people matters, so there are more than $18\choose 4$ orderings that have 4 matches.

The correct way to solve the 2 coincident problem is to calculate the probability of 2 people not sharing the same birthday month.

I can't provide advice on how to extend this manual calculation to the 3 or 4 coincident problem. If you know R, there is the pbirthday() function to calculate this:

So for 18 people there is a 55% chance that at least 4 people will share the same month.

Here is a good source for understanding the problem: https://www.math.ucdavis.edu/~tracy/courses/math135A/UsefullCourseMaterial/birthday.pdf

Edit For completeness here is a quick and dirty simulation in R:

More specifically, the probabilities for the different frequencies of the most frequent month are as follows. $4$ turns out to be most likely and the median (the mean is about $3.76$)

While Henry already has given a way to compute the number exactly by counting all the partitions, it might be interesting to know about two approximate methods.

In addition, there is an alternative exact computation based on conditional Poisson distributed variables.

You won't be easily able to compute all $12^{18}$ possibilities (and it won't be easy to scale up the problem), but you can have a computer simulate randomly a subset of the possible ways and obtain a distribution from those simulations.

Note: here we neglect the fact that the number of birthdays are correlated so this is obviously not exact.

In the comments Whuber has pointed to the pmultinom package. This package is based on Bruce Levin 1981 'A Representation for Multinomial Cumulative Distribution Functions' in Ann. Statist. Volume 9. The outcome of birth-months (which is more precisely distributed according to a multinomial distribution) is represented as independent Poisson distributed variables. But unlike the before mentioned naive computation, the distribution of those Poisson distributed variables is regarded to be conditional on the total sum being equal to $n=18$.

This correction factor is the ratio of the probability that a sum of truncated Poisson distributed variables equals 18 $P(\sum X_i = 18 \vert \forall i:X_i \leq 4 )$, and the probability that a sum of regular Poisson distributed variables equals 18, $P( \sum X_i = 18)$. For a small amount of birth months and people in the group this truncated distribution can be computed manually

These approximations give the following results 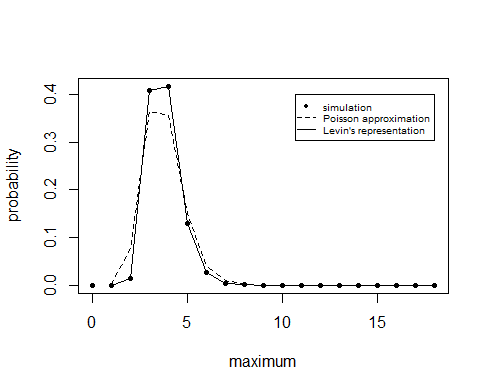 It so happened that 4 team members in my group of 18 happened to share same birth month. Let's say June. What are the chances that this could happen? I'm trying to present this as a probability problem in our team meeting.

There are several other good answers here on the mathematics of computing probabilities in these "birthday problems". One point to note is that birthdays are not uniformly distributed over calendar days, so the uniformity assumption that is used in most analyses slightly underestimates the true probability of clusters like this. However, setting that issue aside, I would like to get a bit "meta" on you here and encourage you to think about this problem a little differently, as one that involves a great deal of "confirmation bias".

Confirmation bias occurs in this context because you are more likely to take note of an outcome and seek a probabilistic analysis of that outcome if it is unusual (i.e., low probability). To put it another way, think of all the previous times in your life where you were in a room with people and learned their birthday month and the results were not unusual. In those cases, I imagine that you did not bother to come on CV.SE and ask a question about it. So the fact that you are here asking this question is an important conditioning event, that would only happen if you observe something that is sufficiently unusual to warrant the question. In view of this, the conditional probabiltity of the result you observed, conditional on your presence asking this question, is quite high --- much higher than the analysis in the other answers would suggest.

To examine this situation more formally, consider these the following events:

I'll leave it to someone more experienced to do the maths to validate this approximate outcome!

This is a balls-into-bins problem.

The probability that the maximum occupancy of any bin is $m$, given $n$ bins and $r$ randomly allocated balls is the coefficient of $x^r$ in

31
Extending the birthday paradox to more than 2 people
7
Birthday "Paradox" -- with a different perspective
3
Birthday Problem: Difference between Canonical Solution and Approximation
7
How many Americans, randomly chosen, are needed to have a 50% chance two live in the same or adjacent states?
0
What is the probability of selecting an MS student
3
Generalized birthday problem plus spouse