How do I choose the best statistical test for analyzing differences between groups in survey data?

I have n=1000 observations and need to compare 2 demographic groups to the rest of the data (any observations not in those groups; so, 3 groups) to answer whether or not there are significant differences between those groups' answers on 10 separate survey questions. Each question has an identical 5-point scale, from Strongly Agree(5) to Strongly Disagree(1).

I'm struggling with how to set this up. I considered creating 3 bins for the different groups, then running comparisons between them for each question. Null is there are no differences.

Also considered just splitting the 2 main groups out one at a time and comparing to the rest of the data (which would include the other group).

I'm not sure if this is right, or what test I should be running. Any help appreciated.

Suppose you have Likert data for three groups. If you are willing to treat the data as interval numerical data, you might use a one-way ANOVA to make an initial determination whether there are any statistically differences at all among the three groups. If there are differences, then do ad hoc Welch t tests to see which groups are different. (Not everyone agrees that Likert data should be treated as interval data.)

If you want to regard the data as ordinal (a non-controversial point of view), then you could use a Kruskal-Wallis test to look for significant differences among the three groups, and follow up with ad hoc two-sample Wilcoxon tests as appropriate.

Simulated data. Here are simulated data for three groups, and examples of how you might run the tests. [Everything below is done in R.] 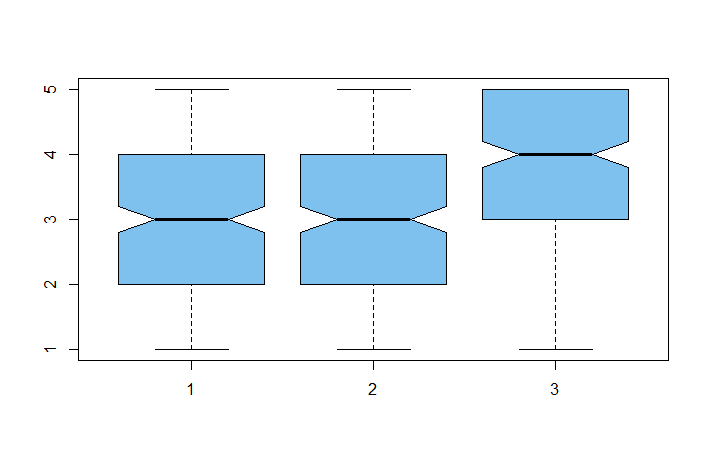 Notches in the boxplots are nonparametric interval estimates of medians, calibrated for roughly comparing two groups at a time. Nonoverlapping notches suggest differences in location. So maybe groups 1 and 2 are the same and group 3 is different from both. Formal tests below support this pattern of differences.

Welch two-sample t tests show highly significant differences between group 3 and groups 1 and 2. For an ad hoc test I would not consider the 4% P-value as significant for an ad hoc test. (Using Bonferroni protection against false discovery I would want to see a P-value below about 1.6% for that.)

For the t tests, I have shown only the P-values. You might want to remove the $p.val from the code to see the complete printouts.

Two-sample Wilcoxon (rank sum) tests find the same pattern of differences that we saw above with the t tests.

Not the answer you're looking for? Browse other questions tagged statistical-significance survey comparison or ask your own question.

8
Is the sum of a number of ordinal variables still ordinal?
1
What statistical test to use to examine attitude and which components have strong/weak influnces on attitude? 4-point Likert Scale survey
1
Statistical significance for non-random survey
0
How to measure a delta in survey reponses?
0
Which statistical test should I use - likert scales and multiple categorical groups?
1
Statistical Test for Employee Engagement Relative to Benchmark
2
How to analyze rating data? Independent variable: two groups. Dependent variable: *strongly disagree* to *strongly agree*
2
Looking for guidance - statistical test to use for survey data