I'm trying to characterise an arbitrary, unimodal distribution in a way that is a) easily understandable (to a physics audience) and b) comparable with a normal distribution.

The interval [$\mu-\sigma$, $\mu+\sigma$] contains ~68% of the probability mass of a normal distribution N($\mu, \sigma$), so by quoting $\mu$ and $\sigma$ I can characterise the interval in which typical values lie.

If for an arbitrary, unimodal distribution I (numerically) find interval bounds $\sigma_-$ and $\sigma_+$ such that [$\nu-\sigma_-, \nu$] and [$\nu, \nu+\sigma_+$] each contain ~34% of that distributions probability mass, where $\nu$ is its mode, those values are characteristic and comparable.

In my intuition typical values will fall inside the range in both cases and it will represent the same probability mass. This is notably different from the Half Maximum values of both distributions, which I will call $a_-$ and $a_+$ and define as $p(a_{\pm})=0.5 p(\nu)$. The interval [$a_-, a_+$] might contain more or less of the probability mass, depending on the shape, and is thus not comparable for normals and non-normals.

My question is whether this logic is flawed and if there are any references to support it. The fact that I haven't found any so far makes me think my idea is either wrong or trivial. If it's wrong I'd like to understand why, if it's trivial a reputable quote would put my mind at ease. Since the goal is a numerical implementation in python, any code or links to libraries is also appreciated, but not necessary.

I believe what you are describing is typically referred to as the highest density interval or HDI. You can calculate the interval in R using the ‘HDInterval’ package. The documentation does a good job of describing the interval:

The HDI is the interval that contains the required mass such that all points within the interval have a higher probability density than points outside the interval.

However, I think the best explanation is given by the following set of graphs which I have lifted from John K. Kruschke's book, Doing Bayesian Data Analysis. Notice how in the second example, the interval is not symmetric, and how in the third example with bimodal data, it is not even continuous!

The HDI is most often used and discussed in applications related to Bayesian statistics. However, it applies to any probability distribution. 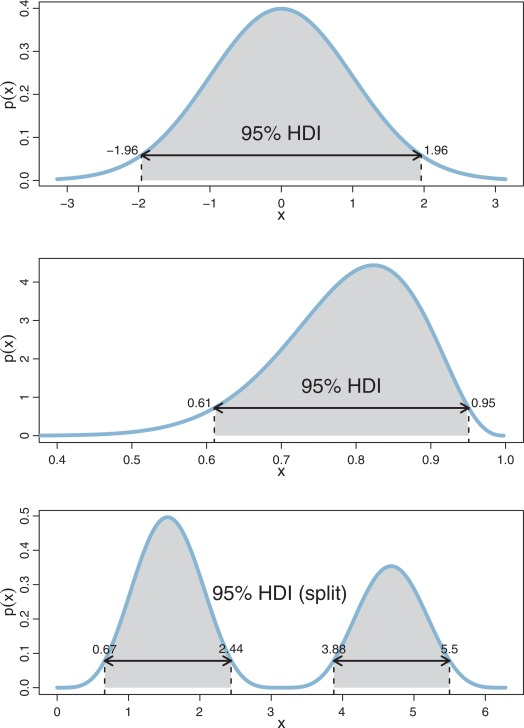 Not the answer you're looking for? Browse other questions tagged normal-distribution confidence-interval numerical-integration or ask your own question.