How can “word hashing” cause a collision in DSSM?

They say in their paper, that "word hashing" can cause a collision. But I don't understand, how. For example, if word good is tranformed to #go, goo, ood, od# it still remains unambiguous and can't collide with anything.

Can you explain the point please? 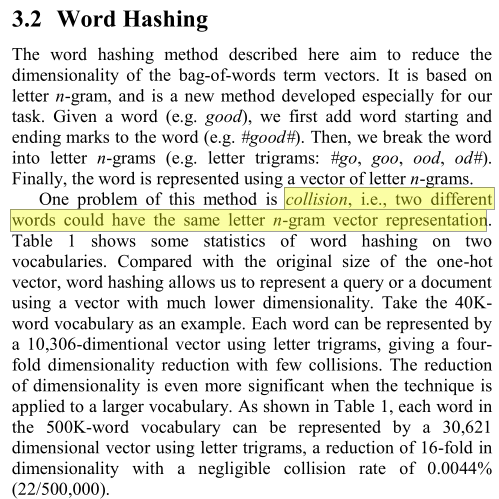 Apparently they did found 22 such collisions in their data.

What they do, is they first first divide words into $n$-grams and then one-hot encode into vector. This is not described in the paper explicitly, but may be guessed from the context, that each position in the vector is occurrence (coded as one), or absence (coded as zero), of the particular $n$-gram in the word. That is the reason why they observed $10,306$ unique vectors for $40\text{k}$ word set and $30,621$ for $500\text{k}$ word set. Notice that $30,621^{1/3} = 31.28$ and $10,306^{1/3} = 21.76$ (for three-grams), where number of possible three-grams build from the set of the Latin characters, -, and #, is $28^3=21,952$, while non-standard characters like æ, or ö, may also appear, so the length of the vectors is the number of unique $n$-grams observed in the data. Of course, language is not build by combining letters in random combinations, so not all combinations will appear, or will be equally popular, hence the larger collection of words, the more tokens we'll observe.

What this also means is that neither order, nor number of times $n$-grams appear is accounted for. So for example, "aaa" and "aaaa" both contain only the #aa, aaa, aa# 3-grams, so both would be encoded as the same vector. As you can see from the paper, such cases are very rare, so it would be hard to come up with a more realistic example, at least no such example immediately comes to my mind. I skimmed through the paper, but didn't find what was the data that they used, but you could always preprocess the data and check the duplicates by hand to verify what they were.

Still, tl;dr is that collisions should be a rare case for human language. Of course, this does not have to be the case for all sequences. For example, if you encoded DNA sequences like this, I'd imagine there would be a lot of collisions, since they consist of only four nucleobases ( A, G, C, and T), so there is a much smaller number of possible $n$-grams among them.

Tim♦Tim
91.3k1717 gold badges193193 silver badges332332 bronze badges
$\endgroup$
10
|  Show 5 more comments
2
$\begingroup$
Want to improve this post? Provide detailed answers to this question, including citations and an explanation of why your answer is correct. Answers without enough detail may be edited or deleted.

if we looked on "goomoosoo" and "goosoomoo" as words, then it is easy to find that they have the same letter 3-gram vector representation。

so, i think Tim's answer has something wrong, word frequency is matters

If I understand correctly, they use a hash function $h$ that maps n-grams to an integer that is "much" smaller than the vocabulary size. The vector representation of a word is the vector which component $i$ is 1 iff the word contains a subword which hash value is $i$.

A collision happens if the set of hashes of two words is identical. More precisely, if:

Although, it is probably unnecessary to deal with this, as Tim pointed out.

Not the answer you're looking for? Browse other questions tagged word2vec bag-of-words or ask your own question.

7
word2vec neural network - bias units
8
What is the relation of the negative sampling (NS) objective function to the original objective function in word2vec?
3
Exact details of how word2vec (Skip-gram and CBOW) generate input word pairs
3
Skipgram - multiple formulations?
1
Query about Word2Vec
0
How are word vector representations derived in Skip-gram?
0
What exactly is Word2Vec in the context of CBoW and Skip-gram?
2
Debiasing word embeddings