Have I presented Kruskal-Wallis test properly?

I want to compare whether there is a link between acute/chronic/unknown condition and opinion of statement Y , so I decided to do a kruskal wallis test. Here is the data:

For the test I convert the likert scale to a 1-5 scale and did the calulcation. I have two questions I could do with some help in:

(1) Have I communicated the method of analysis appropriately in my "analysis" section and if I have presented results appropriately?

Analysis: "Likert-scale data was treated as ordinal (1-5) and subsequently analysed using the Kruskal-Wallis H test and post-hoc Dunn’s test with p-values adjusted according to the Benjamini-Hochberg FDR method."

Bear in mind I used an online website to do these and it offered the Benjamini-Hochberg FDR method for correction of p value in post hoc analysis (although that wasn't needed here). do I need to mention the n = 235 in presenting the results or is that not necessary?

Any other comments will be appreciated

I am puzzled about two parts of your question. (a) The Kruskal-Wallis test does not show significant results, so it is completely inappropriate to do any kind of ad hoc tests (looking for non-existent significant differences among groups). Why then are you even mentioning ad hoc tests. 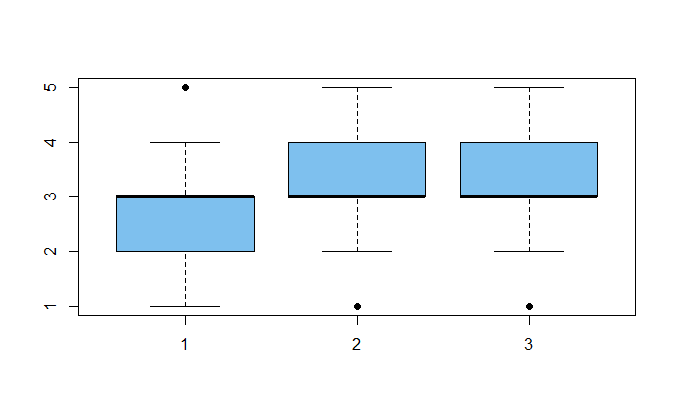 (b) The Kruskal-Wallis test has nothing to do with group means. So, why are you showing overlapping confidence intervals for population means?

If you going to mention that there were 235 subjects in the three groups combined, the natural way to do that would be to include a 'Total' row and column in your data table, showing 235 as the Grand Total.

BTW, a chi-squared test on a table of your Likert counts does not reject the null hypothesis that responses are homogeneous among the groups.

If you had the same proportions in a study with twice as many subjects (all counts approximately doubled), then the chi-squared test might have had the power to reject the hypothesis of homogeneity. But if you actually doubled the overall sample size, the proportions might be quite different---perhaps still failing to reject the null hypothesis.

Not the answer you're looking for? Browse other questions tagged kruskal-wallis-test or ask your own question.