Ask Question
Asked 10 months ago
Active 10 months ago
Viewed 424 times
7
$\begingroup$
This question already has an answer here:
What is the intuition behind exchangeable samples under the null hypothesis? (1 answer)
Closed 10 months ago.

Permutation tests assume exchangeability of the response/observations under the null hypothesis.

In what practical situations is this clearly violated? When is it unproblematic?

Edit/additional question in order to not be considered as duplicate: if we permute within additional blocking structure (e.g. patients) and sum up the test statistic across blocks, we would only need exchangeability within block, right?

PS: I am not looking for tests to verify this symmetry condition as it is a condition under the null, not of the observed data...

One situation in which exchangeability does not hold occurs when we're testing whether means of two groups are equal, but suspect variances may be unequal.

Inappropriate pooled t test. Suppose we try to use a pooled 2-sample t test of $H_0:\mu_1=\mu_2$ vs $H_a:\mu_1\ne\mu_2.$ Then the true rejection rate (about $36\%)$ of an alleged test at level $\alpha=0.05=5\%$ is much larger than $5\%,$ as shown by the following simulation in R. A monumental 'false discovery' rate. The pooled test assumes the two samples are from populations with equal variances.

Welch t test, not assuming equal variances. Such situations with unequal variances validate the preference of many statisticians for the Welch two-sample t test, which does not assume equal variances in the two populations. The Welch test (with intended $\alpha=5\%)$ has a true significance level very nearly $5\%.$

So the rejection rate of the permutation test, with difference in means as its metric and an intended $\alpha = 0.05,$ is about as high as for the pooled t test.

Note: A permutation test with the Welch t statistic as metric treats samples with unequal variances as exchangeable (even if data may not be normal). Its significance level would be substantially correct.

Another important case is tests for interaction. The null hypothesis of additivity does not imply exchangeability. In a linear, constant variance model you can permute residuals (Anderson, 2001), in generalised linear models it's more complicated

There are many, many situations where exchangeability of values in a sequence does not hold. One general scenario is when you have a time-series of values that are autocorrelated, so that values near each other in time are statistically related. For example, if we produce a random walk, the values in the random walk are not exchangeable, and this will be extremely obvious by comparing a plot of the random walk to a plot of a random permutation of that random walk. 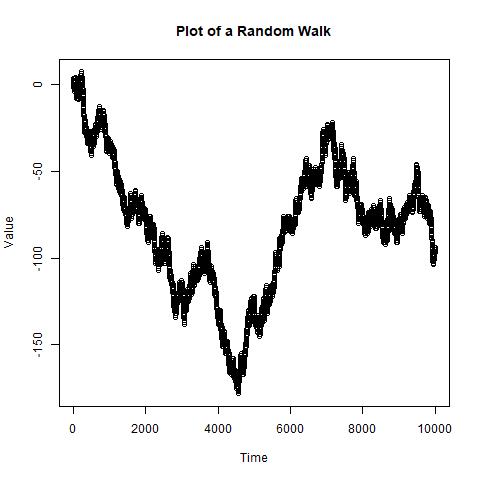 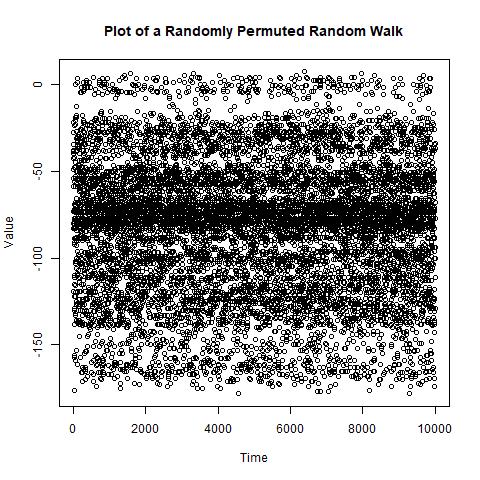 We can see from these plots that the random permutation jumbles the order of the points so that values near each other in time are no longer near to each other in value. Any moderately sensible runs test will easily detect that the first plot involves a vector of values that is not exchangeable.

Not the answer you're looking for? Browse other questions tagged intuition permutation-test resampling exchangeability or ask your own question.