Regression when $X$ is random and unobservable

I am trying to fit a curve to empirical data where I know that uncertainty is in the predictors ($X$) (there could be also an uncertainty in $Y$, but let's keep things simple for the start). In other words, I know only the expected values, but not the true values of $X$.

My model is somewhat complicated, but I'll try to use a simplification as an example. Say I want to determine the rate of the decay b of a compound. Based on my domain knowledge I assume the following model:

I set up the experiment in which I start with theoretically always the same amount N0 of the compound, wait some pre-defined time t0, which I vary over the repeated runs of the experiment, and measure the actual remaining amount Nt of the compound. However, I have errors both in N0 and in t0, so that the actual (but unobserved!) starting amount N and the waiting time t are random variables, say, normally distributed around N0 and t0, respectively. 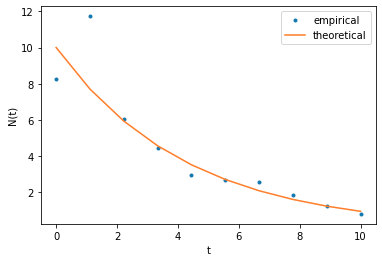 How would I determine b in a maximum likelihood manner?

I have read Simple linear regression model with random x, Regression with random X, Find P(Y=y | X=x) when X is a continuous random variable, and What are the Differences in Linear Regression of Y vs X when both Y,X are Random and Regressing Y vs X when X is Mathematical, but they don't seem to answer my specific question (or in an abstract way which I was unable to comprehend).

Browse other questions tagged regression maximum-likelihood measurement-error or ask your own question.

4
Regression with random X
1
What are the Differences in Linear Regression of Y vs X when both Y,X are Random and Regressing Y vs X when X is Mathematical
1
Simple linear regression model with random x
1
Find P(Y=y | X=x) when X is a continuous random variable

12
When can't frequentist sampling distribution be interpreted as Bayesian posterior in regression settings?
13
What is the most appropriate way to transform proportions when they are an independent variable?
4
Modeling delayed feedback using logistic regression
2
Averaging beta and slope from several regressions, spurious regression slopes by group
8
Why am I not getting a uniform p-value distribution from logistic regression with random predictors?
11
How to calculate confidence scores in regression (with random forests/XGBoost) for each prediction in R?
4
Basic: Why are Slope, Intercept in Regression considered Random Variables?