My question was inspired by this post which concerns some of the myths and misunderstandings surrounding the Central Limit Theorem. I was asked a question by a colleague once and I couldn't offer an adequate response/solution.

I replied that if we were to repeat this process of taking random draws of "30 or more" (rough guideline) from a population say "thousands and thousands" of times (iterations), then the histogram of sample means will tend towards something Gaussian-like. To be clear, my confusion is not related to the number of measurements drawn, but rather the number of times (iterations) required to achieve normality. I often describe this as some theoretical process we repeat ad infinitum.

(1) Is there any criteria for the number of repetitions (iterations) we must conduct to observe normality? I could try 1,000 iterations at each sample size and achieve a reasonably similar result.

(2) Is it tenable for me to conclude that this process is assumed to be repeated thousands or even millions of times? I was taught that the number of times (repetitions/iterations) is not relevant. But maybe there was a rule of thumb before the gift of modern computing power. Any thoughts? 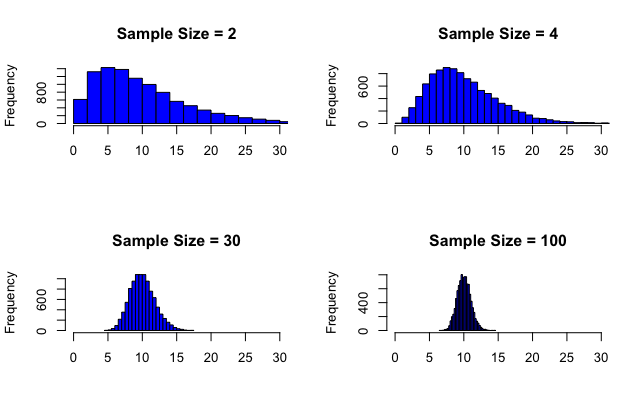 To facilitate accurate discussion of this issue, I am going to give a mathematical account of what you are doing. Suppose you have an infinite matrix $\mathbf{X} \equiv [X_{i,j} | i \in \mathbb{Z}, j \in \mathbb{Z} ]$ composed of IID random variables from some distribution with mean $\mu$ and finite variance $\sigma^2$ that is not a normal distribution:$^\dagger$

The only real way to determine the appropriate sample size required for an "accurate" approximation by the normal distribution is to have a look at the convergence for a range of underlying distributions. The kinds of simulations you are doing are a good way to get a sense of this.

It is trivial to show that $M \hat{F}_n(x) \sim \text{Bin}(M, F_n(x))$, so the "error" between the true distribution and the empirical distribution at any point $x \in \mathbb{R}$ has zero mean, and has variance:

$^\dagger$ Of course, it is possible to use a normal distribution, but that is not very interesting because convergence to normality is already achieved with a sample size of one.

What is the distribution $F_{\bar{X}_n}$, and in particular, is it normal?

The answer is no, and I'll focus on your exponential example. We can understand this problem by literally considering the sampling distribution of $\bar{X}_n$ given iid $X_1,\dots,X_n \sim Exp(\gamma)$. Note that $Exp(\gamma) = \text{Gamma}(\alpha=1,\gamma)$, and so $\sum X_i \sim \text{Gamma}(n,\gamma)$ and thus

What the CLT says is that as $n$ goes to infinity, $\bar{X}_n$ will converge to a normal distribution, and similarly, $\text{Gamma}(n,\gamma/n)$ (or any $F_{\bar{X}_n}$ where $X$ satisfies the requisite requirements for CLT to kick in) will asymptotically equal a normal distribution.

In response to your comments, maybe there's a misunderstand somewhere. It's helpful to emphasize that we can think of $\bar{X}_n$ as a random variable itself (often we think of it as the mean and thus a constant, but this is not true!). The point is that the random variable $\bar{X}_n$ that is the sample mean of $X_1,\dots,X_n \sim F_X$, and the random variable $Y \sim F_{\bar{X}_n}$ are the exact same random variable. So by drawing $K$ iid draws of $X_1,\dots,X_n \sim F_X$ and calculating $\bar{X}_n$, you're doing the equivalent of $K$ draws from $F_{\bar{X}_n}$. At the end of the day, regardless of whether $K = 100,1000,100000,\dots$, youre just drawing $K$ times from $F_{\bar{X}_n}$. So what is your goal here? Are you asking at what point does the empirical cdf of $K$ draws accurately represent the cdf of $F_{\bar{X}_N}$? Well forget about anything about sample means in that case, and simply ask how many times do I need to draw some random variable $W \sim F$ such that the empirical cdf $\hat{F}_n$ is 'approximately' $F$. Well there's a whole literature on that, and two basic results are (see the wiki link on empirical cdfs for more):

What you are doing with your histograms in your post is really estimating the density (not the CDF) given $K$ draws. Histograms are a (discrete) example of kernel density estimation (KDE). There's a similar literature on KDEs, and again, you have properties like the sample KDE will converge to the true underlying density as you gather more draws (ie $K\to\infty$). It should be noted that histograms don't converge to the true density unless you also let the bin width go to zero, and this is one reason why kernel approaches are preferred: they allow smoothness and similar properties. But at the end of the day, what you can say is the following:

For a fixed $n$, drawing iid $X_1,\dots,X_n$ and considering the random variable $\frac{1}{n}\sum_{X_i}$ is equivalent to considering the random variable with distribution $F_{\bar{X}_n}$. For any $K$ draws from $F_{\bar{X}_n}$, you can estimate the CDF (empirical CDF) and/or estimate the density (two approach are histogram or KDE). In either case, as $K\to\infty$, these two esimates will converge to the true CDF/density of the random variable $\bar{X}_n$, but these will never be the normal CDF/desntiy for any fixed $n$. However, as you let $n\to\infty$, $\bar{X}_n$ is asymptotically normal (under suitable conditions), and similarly, the CDF/density will also become normal. If you take $n\to\infty$, and then $K\to\infty$, then you will get the cdf/density of a normal rv.

Not the answer you're looking for? Browse other questions tagged r probability distributions sampling central-limit-theorem or ask your own question.

52
Debunking wrong CLT statement
20
Why does increasing the sample size of coin flips not improve the normal curve approximation?

2
Central-limit theorem via sample size or sampling magnitude?
20
Why does increasing the sample size of coin flips not improve the normal curve approximation?
2
Sampling distribution is not normal. How is that possible?
2
Question about the central limit theorem? sample size