Strong ignorability: confusion on the relationship between outcomes and treatment

In the research area of potential outcomes and individual treatment effect (ITE) estimation, a common assumption called ''strong ignorability'' is often made. Given a graphical model with the following variables: treatment $T=\{0,1\}$ (e.g. giving medication or not), covariates $X$ (e.g. patient history), and outcome $Y$ (e.g. health of a patient). The corresponding visualized graphical model would look like as follows:

(where Y is the same here, see image below)

Then, strong ignorability is defined as :

Isn't the whole idea of ITE estimation, to determine the effect of a treatment on the outcome Y by estimating the difference between the two potential outcomes $Y(T=0)$ and $Y(T=1)$, one of which we observe as factual observation from our observational dataset?

What I am missing here and why is my understanding incorrect?

I guess it has something to do with the fact, that if we know $X$ (i.e. when X is given), then there is no uncertainty anymore about the treatment $T$ because knowing $X$ makes $T$ deterministic (as we can see from the graphical model above?)

Moreover, I think I do not understand the difference between the following four things:

which says that conditional on $X$, then the potential outcomes are independent of treatment $T$. It is not saying that $Y$ is independent of $T$. As you point out, that makes no sense. In fact, a classic way to re-write $Y$ is as

which tells us that for every individual, we observe $Y_i$ which is either $Y_{i1}$ or $Y_{i0}$ depending on the value of treatment $T_i$. The reason for potential outcomes is that we want to know the effect $Y_{i1} - Y_{i0}$ but only observe one of the two objects for everyone. The question is: what would have $Y_{i0}$ been for the individuals $i$ who have $T_i=1$ (and vice versa)? Ignoring the conditional on $X$ part, the ignorability assumption essentially says that treatment $T$ can certainly affect $Y$ by virtue of $Y$ being equal to $Y_1$ or $Y_0$, but that $T$ is unrelated to the values of $Y_0,Y_1$ themselves.

First case: suppose that only unhealthy people seek out medication. Then those with $T=1$ will be mostly the weak people, since they are the unhealthy people, and those with $T=0$ will be mostly strong people. But then ignorability fails, since the values of $(Y_1,Y_0)$ are related to treatment status $T$: in this case, both $Y_1$ and $Y_0$ will be lower for $T=1$ than for $T=0$ since $T=1$ is filled with mostly weak people and we stated that weak people just are less healthy overall.

Second case: suppose that we randomly assign medication to our pool of strong and weak people. Here, ignorability holds, since $(Y_1,Y_0)$ are independent of treatment status $T$: weak and strong people are equally likely to receive treatment, so the values of $Y_1$ and $Y_0$ are on average the same for $T=0$ and $T=1$. However, since $T$ makes everyone healthier, clearly $Y$ is not independent of $T$.. it has a fixed effect on health in my example!

We can illustrate with two other examples:

A classic case where this holds is in randomized control trials (RCTs) where you randomly assign treatment to individuals. Then clearly those who get treatment may have a different outcome because treatment affects your outcome (unless treatment really has no effect on outcome), but those who get treatment are randomly selected and so treatment receival is independent of potential outcomes, and so you indeed do have that $(Y_0,Y_1) \perp \!\!\! \perp T$. Ignorability assumption holds.

For an example where this fails, consider treatment $T$ be an indicator for finishing high school or not, and let the outcome $Y$ be income in 10 years, and define $(Y_0,Y_1)$ as before. Then $(Y_0,Y_1)$ is not independent of $T$ since presumably the potential outcomes for those with $T=0$ are fundamentally different from those with $T=1$. Maybe people who finish high school have more perseverance than those who don't, or are from wealthier families, and these in turn imply that if we could have observed a world where individuals who finished high school had not finished it, their outcomes would still have been different than the observed pool of individuals who did not finish high school. As such, ignorability assumption likely does not hold: treatment is related to potential outcomes, and in this case, we may expect that $Y_0 | T_i = 1 > Y_0 | T_i = 0$.

The conditioning on $X$ part is simply for cases where ignorability holds conditional on some controls. In your example, it may be that treatment is independent of these potential outcomes only after conditioning on patient history. For an example where this may happen, suppose that individuals with higher patient history $X$ are both sicker and more likely to receive treatment $T$. Then without $X$, we run into the same problem as described as above: the unrealized $Y_0$ for those who receive treatment may be higher than the realized $Y_0$ for those who did not receive treatment because they are more likely to just be unhealthy individuals, and so comparing those with and without treatment will cause issues since we are not comparing the same people. However, if we control for patient history, we can instead assume that conditional on $X$, treatment assignment to individuals is again unrelated to their potential outcomes and so we are good to go again.

As a final note, based on chat with OP, it may be helpful to relate the potential outcomes framework to the DAG in OP's post (Noah's response covers a similar setting with more formality, so definitely also worth checking that out). In these type of DAGs, we fully model relationships between variables. Forgetting about $X$ for a it, suppose we just have that $T \rightarrow Y$. What does this mean? Well it means that the only effect of T is through $T = 1$ or $T= 0$, and through no other channels, so we immediately have that T affects $Y_1T+ Y_0(1-T)$ only through the value of $T$. You may think "well what if T affects Y through some other channel" but by saying $T \rightarrow Y$, we are saying there are no other channels.

Doubled has a fantastic answer, but I wanted to follow up with some intuitions that have helped me.

First, think of potential outcomes as pre-treatment covariates. I know this seems like a strange thing to do since the word "outcome" is in their name, but considering it this way clarifies some issues. They represent two combinations of the actual covariates, $X$. So, let's rewrite them as such:

(Seeing them this helps divorce them from the observed outcome, $Y$, which we'll get to shortly.) Importantly, if we could observe both of these values, we would not need to assign treatment to anyone. The causal effect of interest is $Y_1 - Y_0$; nowhere in that definition is $T$, the actual treatment assigned, mentioned. This is because we can define the causal effect independently of the actual treatment assignment $T$.

Conditional strong ignorability (which Rubin calls strong ignorability) simply states that we have observed the set of $X$ that goes into $f_0(X)$, $f_1(X)$, and $T$. Conditional on $X$, $f_0(X)$ and $f_1(X)$ are just constants (potentially plus random noise), and conditional on $X$, $T$ is a random process. It is under this circumstance that we can use specific statistical methods to arrive at a consistent estimate of the causal effect of treatment.

Potential outcomes are confusing. They are typically not taught in an intuitive way, and if they are taught after you have learned about statistics, it is very easy to confuse them with the concepts of the observed treatment $T$ and the observed outcome $Y$, which is what data analysts actually deal with, and the causal effect with a parameter in a regression model rather than as a contrast between two unobserved quantities.

Potential outcomes are abstract quantities that serve primarily as explanatory tools. However, because they are confusing, they are not very good explanatory tools. The graphical (DAG) approach to causal inference is far more intuitive because it relies on the notions of $Y$ and $T$ as they are understood by data analysts. The concept of strong ignorability is isomorphic to d-separation of $T$ and $Y$ in DAG language. Consider reading Pearl's Book of Why to help cement these ideas in an intuitive but still rigorous way.

In response to comments:

The system of structural equations that my description of potential outcomes conforms to is the following (with all variables that are not dependent variables considered exogenous and independent):

This is displayed in the DAG below: 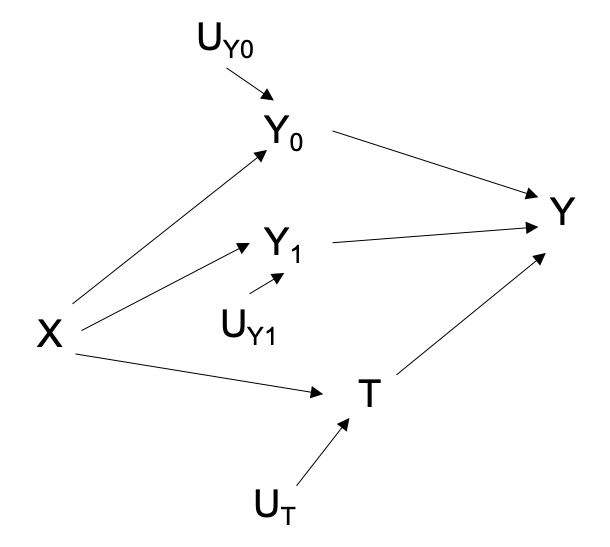 Strong ignorability is that $\{U_0, U_1\} \perp U_T$, which is equivalent to d-separation of $T$ and $Y$ given $X$. Note that this DAG is simply a graphical translation of the system of structural equations. There are other ways of displaying potential outcomes in DAGs, one of which is the single-world intervention graph (SWIG).

Not the answer you're looking for? Browse other questions tagged causality graphical-model treatment-effect counterfactuals or ask your own question.

16
Unconfoundedness in Rubin's Causal Model- Layman's explanation
1
What are key papers discussing causal inference from a missing data perspective?
1
Understanding the perfect randomization assumption in treatment models
1
In observational studies, how can unconfoundedness, $(Y(1), Y(0)) \perp T \mid X$, hold if $(Y(1), Y(0))$ are fixed and non-random?
1
Why can you not bypass the strong ignorability/unconfoundness assumption via iterated expectations?
1
In causal inference, why is the uncounfoundedness assumption interpreted as the treatment assignment being conditionally independent of the outcomes?
0
Under heterogeneous treatment effects, will the usual unconfoundedness assumption need modification for observational studies?
1
Notation for independence of potential outcomes
3
When is the conditional mean of potential outcomes linear in the propensity score?
1
Connecting potential outcomes, SUTVA, and regression methods