Should I choose single model A+B+A:B or two models A at 2 levels of B?

I have a longitudinal model: response ~ device * time. The device should lower the response over time. There are two devices: A and B.

There is an interaction between the device and time. 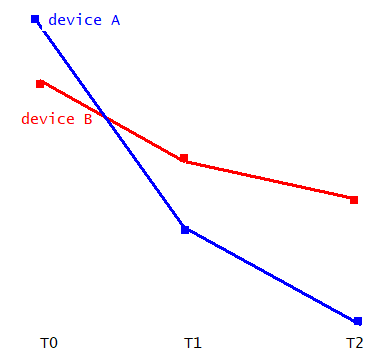 The problem is that the model fit using GLS estimated using REML and unstructured covariance and then passed to a function that calculates the EM-means behaves as follows:

When I fit response ~ device * time, the Dunnett contrast and adjustment specified like: time | device (conditionally) gives me

When I fit response ~ time separately for device A and device B (the data set is filtered to A only or B only), and then use Dunnett on the EM-means separately per each model, I get:

And the simple pairwise paired t-test run on certain combinations (corrected via Bonferroni) gives me even lower p-values for device B:

I guess what happened:

Which model is better? I know there are no simple advices, especially that I don't provide reproducible example (I cannot share the data), but maybe some suggestions?

From the client perspective - the pairwise paired t-test is the simplest method and shows nice significance over time per each device separately. Two separate models per each device also give it nice. But the full model, which looks more "appropriate", as it employs both the changes in covariance and the maximum information doesn't show significance on the device B.

I don't hunt for significance, just want to understand why does it happen? And if so, is it always safer to run the full model and sacrifice the significance? Isn't this increasing the type 2 error?

Whether or not you can share the original data or fake data that emulates the real data, it would be helpful to at least describe the nature of the data: is your response binary, positive continuous, continuous, etc? Are these data from an experiment or an observational study? How many observations per device*time combination are there? What is special about these three time points? Is time being modeled as a continuous or categorical predictor?

To your first question of which model is better, it depends upon what your plans are with the model. If you're comparing the difference between devices in the change in outcome over time, then you want your option (3): model effects for time, device, and their interaction, and do inference on the interaction parameter. It would not be appropriate to fit two device-specific models and then try to the compare device B model to the device A model. If you truly want to just separately report the change over time for each device, then that brings us to your second question of understanding differences between the models.

Option (1), paired t-tests, is usually never a good idea, in my opinion.

PS If your outcome is positive-continuous, and you're not log-transforming the outcome prior to fitting your models, you might consider doing that, especially if you're finding that the variance of the outcome is related to the mean of the outcome.

Not the answer you're looking for? Browse other questions tagged modeling panel-data paired-data generalized-least-squares dunnett or ask your own question.

4
Prediction with GLS
6
Interrupted time-series analysis for panel data
4
Equivalence of the OLS and GLS estimates
0
Can unit/time dummies be included with PCSE or XTGLS?