Why check for normality of data in a sample?

from what I understand the assumption of normality (that must be assumed if one wants to use parametric tests) refers to the sampling distribution of the mean. It does not imply that the distriubtion is normal in the population itself nor a in a given sample. With the CLT we can assume that with a large enough sample this assumption is met:

given random and independent samples of N observations each, the distribution of sample means approaches normality as the size of N increases, regardless of the shape of the population distribution

Therefore (from my understanding):

If we have a large sample ( I know the N > 30 is debatable, but say the N = 500 simple random sample) OR the variable of interest form population that we are sampling from is known to be normal, then the sampling distribution has to be normal and therefore we can use parametric tests. For example I stumbled across this in one of the scientific journals:

With large enough sample sizes (> 30 or 40), the violation of the normality assumption should not cause major problems (4); this implies that we can use parametric procedures even when the data are not normally distributed (8). If we have samples consisting of hundreds of observations, we can ignore the distribution of the data (3). According to the central limit theorem, (a) if the sample data are approximately normal then the sampling distribution too will be normal; (b) in large samples (> 30 or 40), the sampling distribution tends to be normal, regardless of the shape of the data (2, 8); and (c) means of random samples from any distribution will themselves have normal distribution (3). Link to the article

Some of the trouble is that the central limit theorem is that the convergence is a limit, not realized in finite sample sizes...

Therefore, if you have normal data, you immediately have a normal sampling distribution.

Aother reason is that we sometimes do inference about parameters other than means. Another parameter we might want to test is the variance. Let's do a simulation to test the equality of variances for two equal exponential distributions. 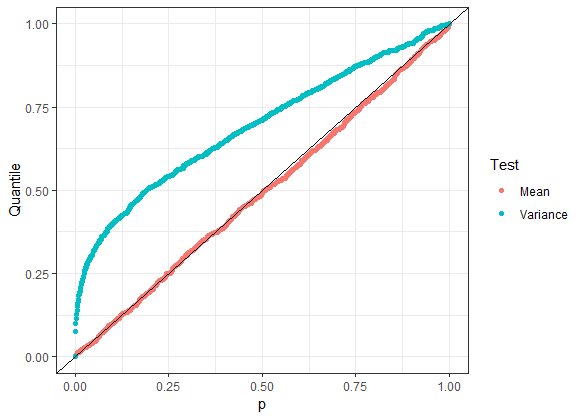 The F-test of variance equality rejects the true null hypothesis much more often that the t-test of mean equality ($35\%$ rejections at $\alpha = 5\%$), which behaves approximately correctly (uniform distribution of p-values).

To quote a source:

So, per your question: "why do people plot histograms to see if the data in a sample is normally distributed?", one possible answer is that we are actually checking for "an approximate normal distribution pattern", per the source above.

2
Which version of the t-test (or other) should I use?
2
Undefined central moments; How to show that calculating a sample mean does not make sense?

11
Question about normality assumption of t-test
4
Why isn't the sample distribution of r normal?
4
About the central limit theorem and statistical testing
2
Why can we assume a single sample is normally distributed?
0
Are sampling distributions of any statistic used in real life statistical analyses?
5
How is CLT related to the condition of data (normality assumption)?
2
When a population is not normal, can F ratio be used for ANOVA analysis?
1
Trouble understanding the Central Limit Theorem's real life application