I am confused about masking in linear regression for multiple classes...At the bottom I have added one of the most used examples. There are two points I do not understand

(1) Why is on the image at the bottom only one "line" visible as decision boundary? I would have expected three lines - namely one for each regression model, as indicated by this picture: 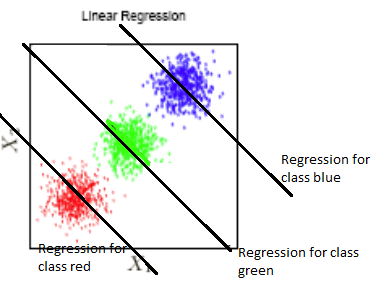 Picture from the book The elements of statistical learning:

Thanks so much in advance for your help! I have read almost all blog posts I found regarding this topic, but somehow I do not get it...

I can't expand on what is already discussed in ESL, but hopefully, I can explain what the book is saying in a way that you can better understand. First, I'll clarify that the approach they are describing is using linear regression to predict the binary variable of whether a point belongs in a given class. The book fits a separate regression line for each class. The point is not to predict X2 from X1, which seems to be what you are attempting with the regression lines in your first image, but to predict the class, or the color of the point, given both X1 and X2. Here is an example of what the data and corresponding regression line for the first (red) class of points approximately look like.

Edit: Note, I am only plotting class versus a single X variable. The actual data is 2-Dimensional (has X1 and X2). I represent the regression as a line but it would actually be a plane. I believe this simplified example clarifies the idea nevertheless. 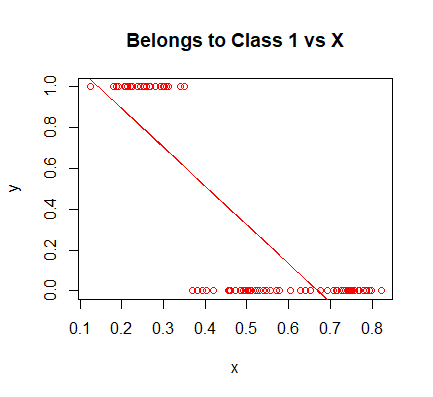 The third image you include is not a graph of the error of the fits. It is actually a graph of the regression lines themselves. The rug plot (colored dashes on the X-axis) indicates at which values the points for each class are equal to 1. The graph I included is meant to be analogous to the red regression line in the left pane. 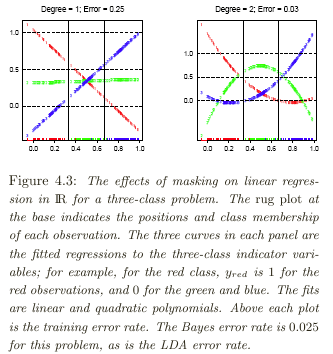 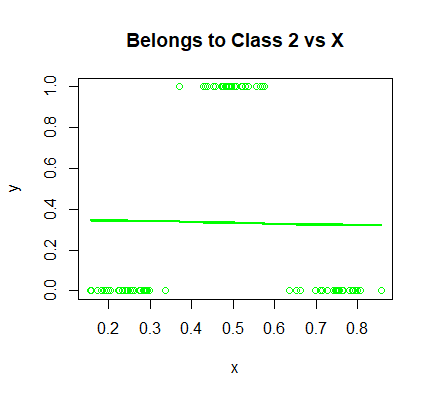