In the chart below is a Gaussian Mixture model (GMM) based on three time series or datasets that the model was able to easily cluster into three different colored classes. Class 1 is the blue ellipse cluster for data vector 1 (also called mixture component 1), the class 2 red ellipse is the cluster for mixture component 2, and green is 3. Each of these datasets are further defined by their own distinct mean and covariance ($\mu$ , $\Sigma$), discovered by the GMM. 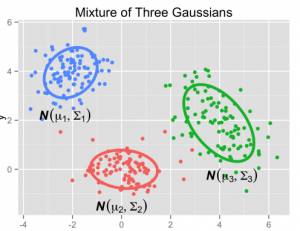 Besides using GMM clustering to classify new unseen observations (out-of-sample data), is there a way to make the GMM target a specific class? Say that, for some hypothetical context, I think class 1 in Blue is better than the other classes. Once the GMM is trained and identifies the distributional properties of that class ($\mu$ , $\Sigma$), can it be used to nudge the output of some optimization algorithm to generate new data observations or predictions that lie in the blue ellipse? Or instead of generating the desired class: if the generative model generates "wrong" samples that fall in the green class, can the GMM be used to pull the wrong samples up into the (better) blue class?

Browse other questions tagged gaussian-mixture-distribution generative-models out-of-sample or ask your own question.