Interpreting results from a Poisson and Quasipoisson model 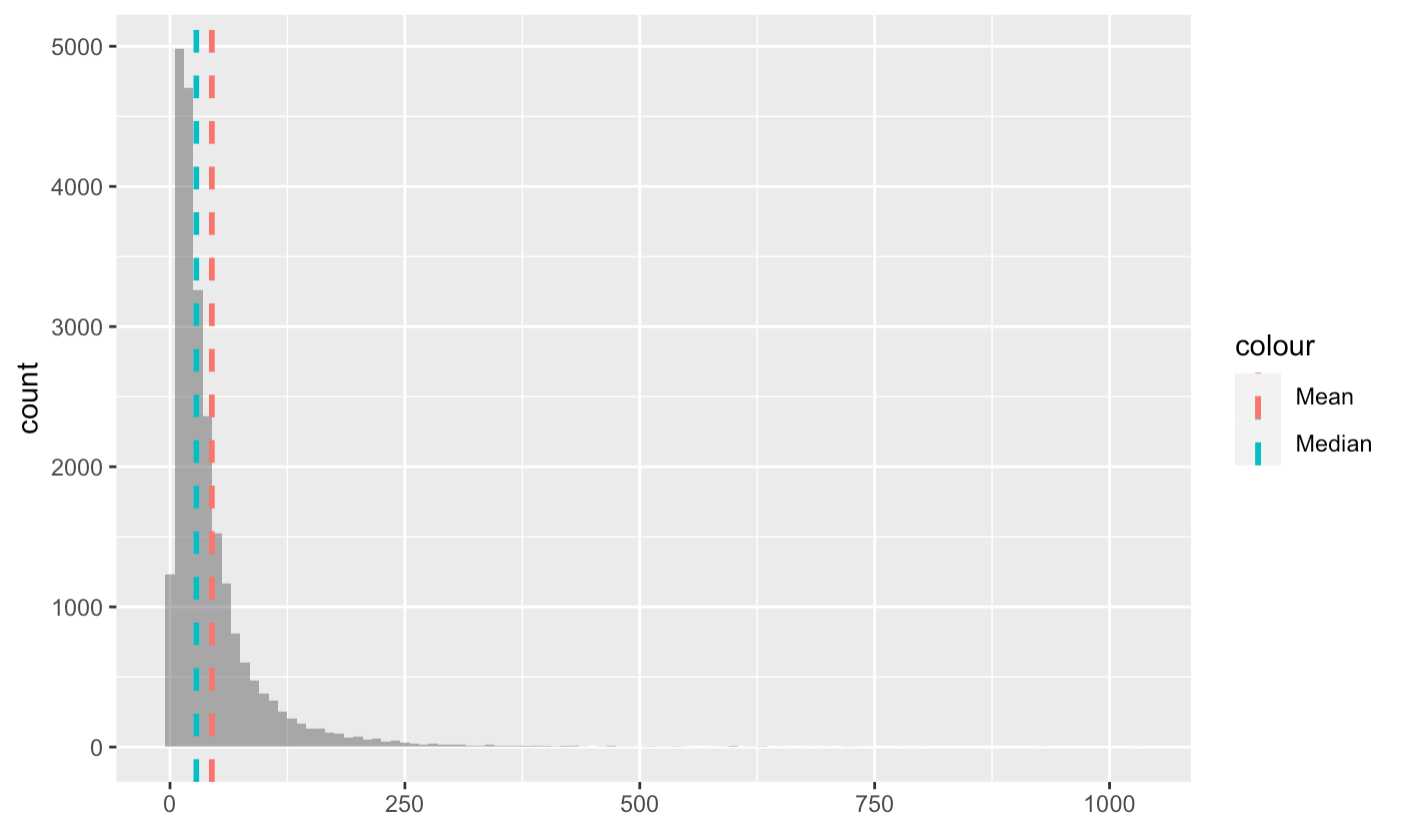 As you can see, the distribution is positively skewed and has a long tail. The results of the Poisson regression model from glm in R are shown here: 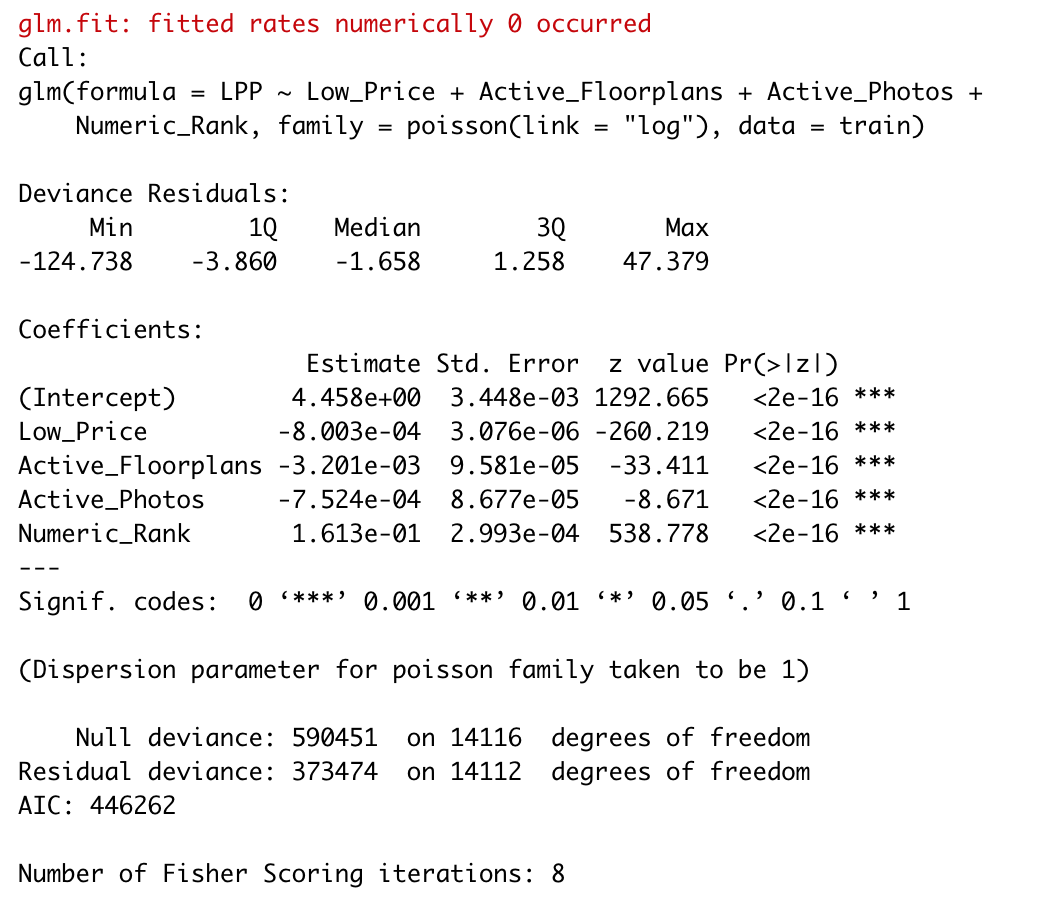 As you can see, residual deviance is much greater than the degrees of freedom, so there is overdispersion. Next, I tried Quasipoissson model that gave these results: 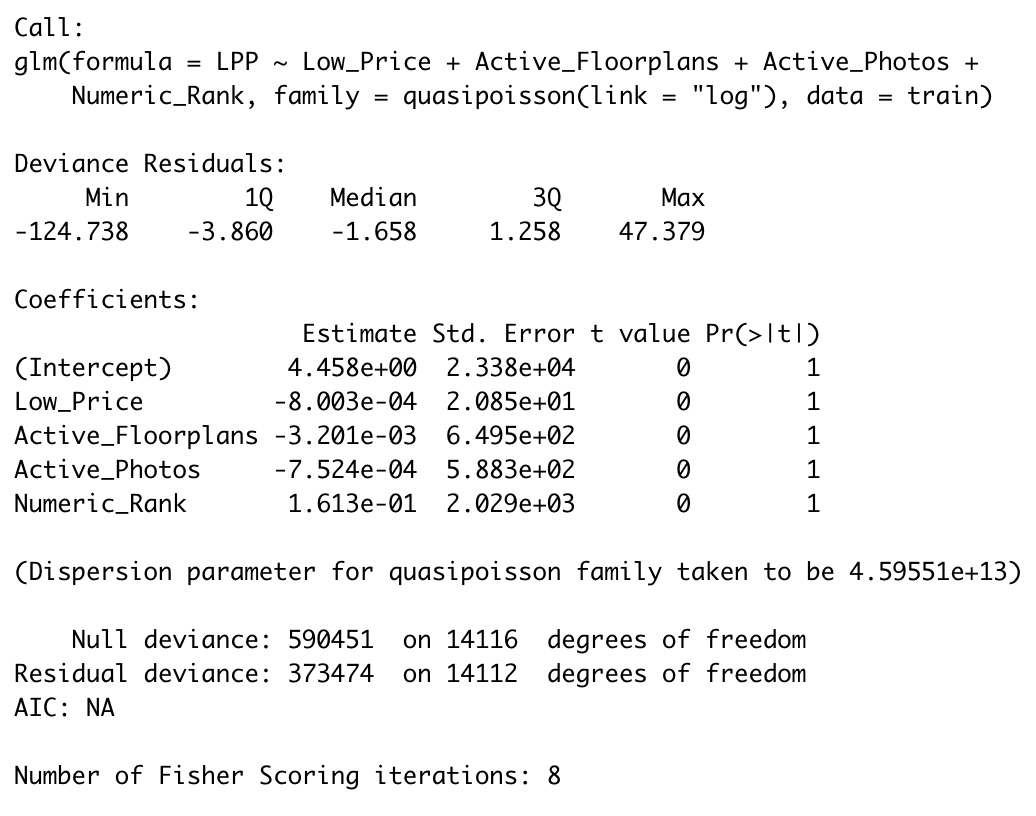 Two issues are likely at play here. One is a convergence failure. The other is adjusting for a covariate(s) with low-cardinality. The likely diagnosis is the latter.

For instance, Low_Price and Numeric_Rank have small estimates of uncertainty and consequently large z-values. This should make you suspicious of your model inputs (covariates). For certain combinations of covariates, there appears to be little to no variation in your response variable. I would assess summaries of LPP by covariate. You might observe a lot of 0's for one particular input. To get around this, you might have to consider dropping a particular covariate or aggregating your data to obtain cleaner estimates.

In the comments, I noted that this often occurs when you blindly throw predictors on the right-hand side of your equation. By "factorized" version of a variable, I meant a variable with many categories (levels). See the basic specification below:

where Floor_Plan might be a multivalued factor variable with many levels. R will attempt estimation of all levels of this variable. For any particular subgroup, there might be predominance of 0 counts. This is just something to consider as you make your model more complex. I hope this helps with your intuition.

As a final thought, there are other ways to estimate overdispersion. In the AER package you will find the function dispersiontest, which implements a test for overdispersion by Cameron & Trivedi (1990). Here is the documentation.

Not the answer you're looking for? Browse other questions tagged generalized-linear-model poisson-regression overdispersion or ask your own question.

19
Poisson or quasi poisson in a regression with count data and overdispersion?
14
Poisson regression assumptions and how to test them in R
1
Changing from Poisson to NB distribution fixes overdispersion and improves model
2
Poisson model appears overdispersed, but usual recommended approaches don't improve fit
1
How to choose best multiple regression model (Poisson/quasipoisson/negative binomial)? - R
1
How to interpret this SAS poisson regression output?