No Correlation but significant ANOVA

I have one categorical variable(4 categories - parenting style) and 6 scale variables(integer numerical values - scores from tests). I want to find out if the parenting style influences the test scores.

If I perform a One-Way ANOVA, I get highly significant results(Sig 2-tailed is 0).

Are these results compatible? They seem not to be. What am I doing wrong?

Now suppose that the $k$ levels of the factor are numerical values, and the response variable is numerical. (Perhaps the factor involves different amounts of irrigation and the response variable is yield per acre of a crop.) Then it makes sense to find the Pearson correlation between measured amounts of water and crop yields. This sample correlation may be far enough from $0$ to be statistically significant.

In your problem, suppose it makes sense to view the $k$ different parenting styles on an ordinal scale. (Maybe different amounts of time spent with a child, different levels of strictness in adhering to family rules, etc.) Then it would make sense to find the Spearman correlation between ordinal style and a numerical test score. (Spearman correlation looks at ranks and ordinal data can be ranked.)

Here are fake data to illustrate ANOVA and Spearman correlation. (Sampling and computations in R.) 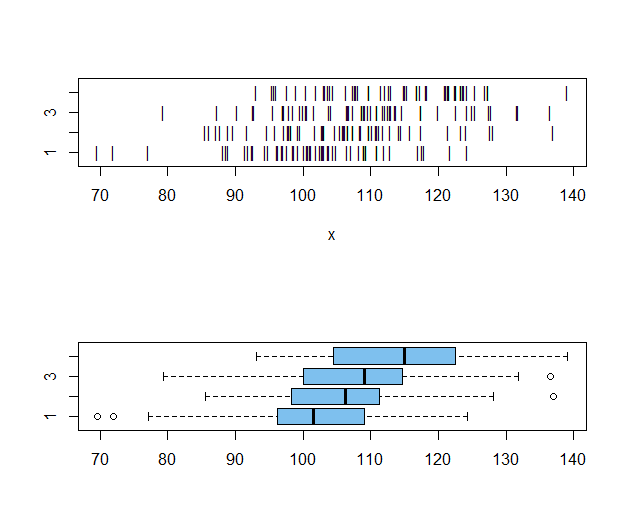 The Spearman correlation depends on the order of numbering of the four parenting styles. As numbered first below, test scores tend to increase as styles run from 1 through 4, as seen in the stripcharts and boxplots above.

The results of the ANOVA are the same for ANY ordering of the four parenting styles. (ANOVA pays no attention to the order of listing of the $k=4$ levels of the factor variable.)

Not the answer you're looking for? Browse other questions tagged correlation anova pearson-r or ask your own question.

7
Precedent for Bootstrap-like procedure with "invented" data?
1
Significance of correlation with range restriction in x
1
Why reversing a continuous measure leads to a non-significant correlation coefficient