Diff in Diff contradicting results with daily and weekly data

I am trying to analyse an experiment where in one region a treatment was given and in three other regions no treatment was given (control group). I have daily panel data for each region over a course of 12 weeks before the experiment and 2 weeks during the experiment. If I now run a Diff in Diff model and a two ways fixed effects model on this data, I get a significant positive effect when I use daily data, but no significant results with the weekly data (weekly aggregation is correct, I checked it multiple times).

Where could this difference come from? Shouldn't both give similar results? What is a general rule regarding the frequency of data for statistical significance?

Here a plot of the data with daily frequency: 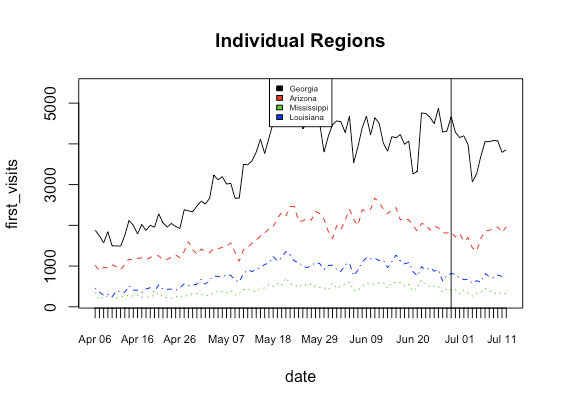 The vertical line indicates the start of the experiment in Georgia.

Your point estimates should be similar, but uncertainty will change.

Daily visitation across each state shows a lot of variation. Undulating patterns show more volatility, by day, as states move into the summer season. However, once you 'aggregate up' to the "week" level (or even higher), you will reduce outcome variation. As a result, your series will exhibit more stability across weeks. Aggregation also reduces the number of available observations, so you correctly note that estimates should remain unaffected. Your effects might be less precisely estimated, though. Juxtapose the standard errors associated with the daily versus weekly difference-in-differences estimates. I assume uncertainty will be inflated using the aggregated weekly series, which might dampen observed effects.

In my opinion, I would match the level of granularity observed in your plot.

Not the answer you're looking for? Browse other questions tagged statistical-significance difference-in-difference or ask your own question.