Why is it OK to model demographics as random effects in bayesian multilevel models?

In Bayesian multilevel models (with, say, people nested within congressional districts) I sometimes see individual level demographic variables like race modeled as random effects. So here’s a slightly simplifed example from this paper: $$ Pr(y_i=1)=\text{logit}^{-1}(\gamma_0 + \alpha^{race}_{r[i]} +\alpha^{gender}_{g[i]}+\alpha^{edu}_{e[i]}+\alpha^{district}_{d[i]}...)$$ $$\alpha^{race}_{r[i]} \sim N(0,\sigma^2_{race}), for~r = 1,....4 $$ $$\alpha^{gender}_{g[i]} \sim N(0,\sigma^2_{gender}) $$ $$\alpha^{edu}_{e[i]} \sim N(0,\sigma^2_{edu}), for ~e=1,...,5 $$ As I understand it this model is treating all the individual level demographic variables as "random effects" just like district. So for race it is assuming that the 4 racial categories that exist in the data (black, white, hispanic, other) are actually just 4 random draws from a larger population of all possible races. To me this seems strange and wrong, since the racial categories we have in the data are meant to be exhaustive and there doesn’t seem to be any reason to think that racial differences will be normally distributed.

So my question is: Is my interpretation of this model correct, and if so why is it justified?

I know that someone actually asked this question before but the answer they were given was that it is probably NOT appropriate to treat race etc as random effects. But that's precisely what is done in many papers on Bayesian multilevel models.

I'd recommend looking at this answer from @Paul for guidance on so-called "random effects" and hierarchical models. In particular, this quote is on point:

Partial pooling means that, if you have few data points in a group, the group's effect estimate will be based partially on the more abundant data from other groups. This can be a nice compromise between estimating an effect by completely pooling all groups, which masks group-level variation, and estimating an effect for all groups completely separately, which could give poor estimates for low-sample groups.

The answer goes on with an example, and discussion of the relationship of this approach to hierarchical Bayesian modeling.

Such pooling is exactly what the authors of the paper you cite were setting out to do with their multi-level approach:*

... a multilevel model pools group-level parameters towards their mean, with greater pooling when group-level variance is small and more smoothing for less populated groups. The degree of pooling emerges from the data endogenously ...

So although it's often argued that categories with few levels (sex, race) should be treated as fixed effects in regressions, they need to be treated as random effects to accomplish this partial pooling.

*The authors used GLMER in R for this, so I suppose this particular example isn't strictly a Bayesian approach.

"Fixed" and "random" effects is terminology from frequentist models. In fact, it is not the best and not consistently used terminology. In frequentist statistics you are trying to find point estimates for the parameters, with the exception of random variables, where you want to learn about the distribution of those effects. In Bayesian statistics every parameter is treated as random variable and we want to learn about it's distribution, so there's no such distinction.

Categories of social position and social identity—including common demographic variables—are important demarcations of population. In the population sciences, there is a good deal of emphasis on differentiating the mean or median (central) experiences of populations, however, the variability of experiences distributed within populations is also substantively important.

Take systolic blood pressure (SBP) as an example: it is approximately normally distributed, and one could imagine two populations with nearly the same, or even identical mean SBP. Does this mean that the health of the two populations with respect to blood pressure is the same? No! If one population is considerably more variable, then its SBP-related health is actually quite a bit worse. First, knowing nothing else but which population an individual is from, we are less certain of their SBP. Second, if there are extremes of SBP (values of it at which risk for bad things happening rises sharply; SBP>130 sharp increase in stroke risk, SBP <90 sharp increase in waking up dead from hypotension) then the population with greater variability has more, possibly far more people "falling through the cracks" at the extremes. The cyan shaded region in the below graph (a cartoon I made, not actual data) is how much more likely people in the blue population are to be at high risk due to hypertension or hypotension than people in the red population. The more variable population is more vulnerable. 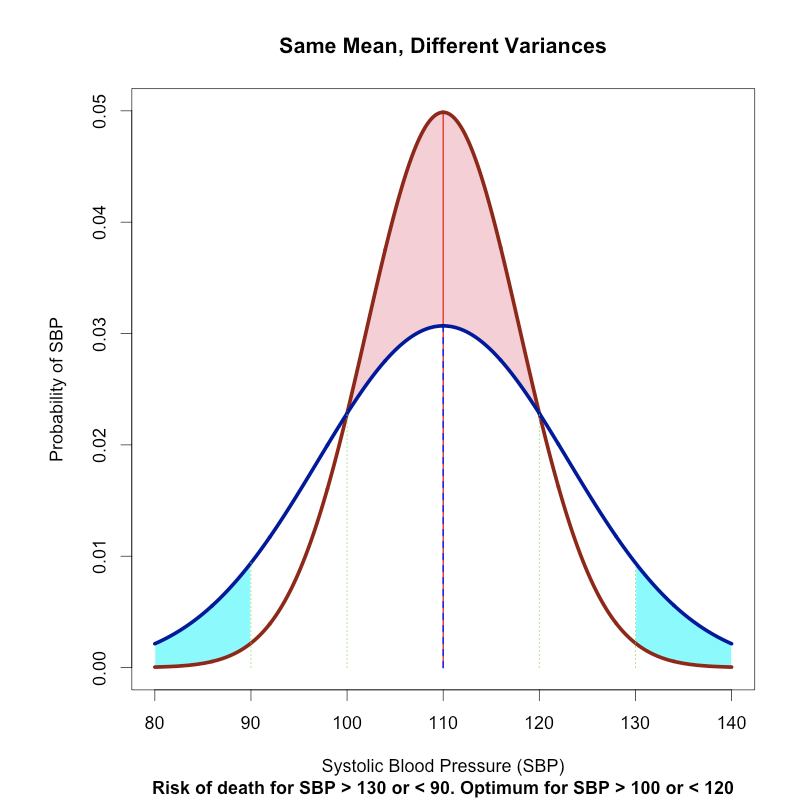 Back to your question, the current US (and global!) social moment of unrest against centuries of institutionalized anti-black racism and against half a millennium of colonization of American Indians, Hawaiians and Pacific Islanders, and Alaska Natives points out that the vulnerability—the increased uncertainty in outcomes, and the increased numbers in the extremes—of the populations defined by racial demographic groups (among others) is a good reason to look to methods, such as using mixed models/random effects models/hierarchical linear models/multilevel models/etc. (as @Tim rightly points out the language is a smidge muddled) to provide estimates of population variability.

NB: I do not see this as an issue of Bayesian vs Frequentist, but as a question of substantive modeling of the world around us.

One interpretation would be that it would not be helpful to call the $\alpha^{race}$ 'random effects'.

Not the answer you're looking for? Browse other questions tagged bayesian multilevel-analysis random-effects-model or ask your own question.

384
What is the difference between fixed effect, random effect and mixed effect models?
272
Is $R^2$ useful or dangerous?
17
Fixed effect vs random effect when all possibilities are included in a mixed effects model
10
Can we model non random factors as random in a multilevel/hierarchical design?
14
What is the Frequentist definition of fixed effects?
6
Justifying the Need for Mixed Effects Models (aka. LME, MLM, etc.)
2
Exchangeability, causal inference, and partial pooling
1
How to model proportions with a hierarchical structure?

3
Interactions between levels in lme4
1
Exchangeability of group effects
2
Multilevel models - Which level should the random effects enter on?
3
Can one usefully specify a multilevel-model with a partially-nested, partially non-nested structure?
3
What is the difference between random-effects models, multilevel models and hierarchical models?
5
Mixed Effects, Doctors & Operations: predicting on new data containing previously unobserved levels, and updating our confidence accordingly