How to handle mixed-models with low sample size as well as low frequency of categorical level of interest?

I am working on analyzing data from an observational study, details of which is as follows: 18 subjects with type 1 diabetes (T1D) + 14 healthy controls were recruited for a four-week long naturalistic driving study. Throughout the study period, subjects and their vehicles were constantly monitored to collect information on their blood glucose (BG) levels (only applies to T1D subjects) and their driving behavior. My part of the analysis is to focus on how acute (in-vehicle) glycemic episodes (details below) affect driver behavior at stop-controlled intersections.

Response variable and control variables were extracted through manual video review (watching video clips of drivers navigating through stop intersections). Also, whether a lead vehicle (the vehicle the subject is following in the same lane when approaching the intersection) or a crossing vehicle (the vehicle that crosses subject driver's path: think of North-Bound/West-Bound type situation at a 4-way stop) had an effect on subject driver's stopping behavior was based on human judgement. Data on glycemic episodes were made available to me.

Since each subject gave multiple responses at stop-controlled intersections, I decided to use the mixed-effects logistic regression model using lme4::glmer() function in R. Additionally, I considered fitting models to three different subsets of the data (say subset1, subset2, and subset3): (a) stopping responses from all subjects (T1D + Control), (b) stopping responses from just T1D subjects, and (c) stopping responses from just T1D subjects who had both hypo and normal episodes. This data partitioning was done for overall data (say data1) that included cases where a lead vehicle or a crossing had an impact on subject driver's behavior and for the data obtained after omitting such cases (say data2). So, I tried fitting models to 6 variants of the data: data1-subset1, data1-subset2, ..., data2-subset3. Furthermore, I tested for both the subject and the intersection (same intersection was visited multiple times, partially-crossed) random effects terms in the model. So, overall I tried the following 12 models:

Here's the descriptive summary statistics for the model data frames: 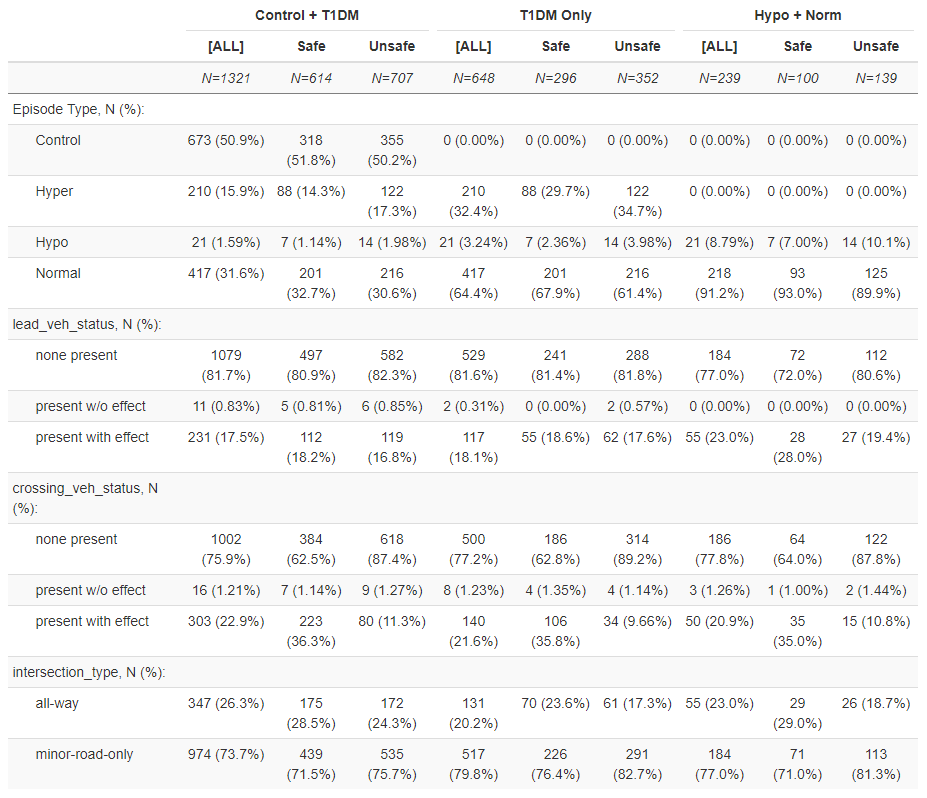 data2-subset*: (Notice records where lead vehicle and/or crossing vehicles had an effect on subject driver's behavior are omitted and control variables are no longer used when modeling using this data) 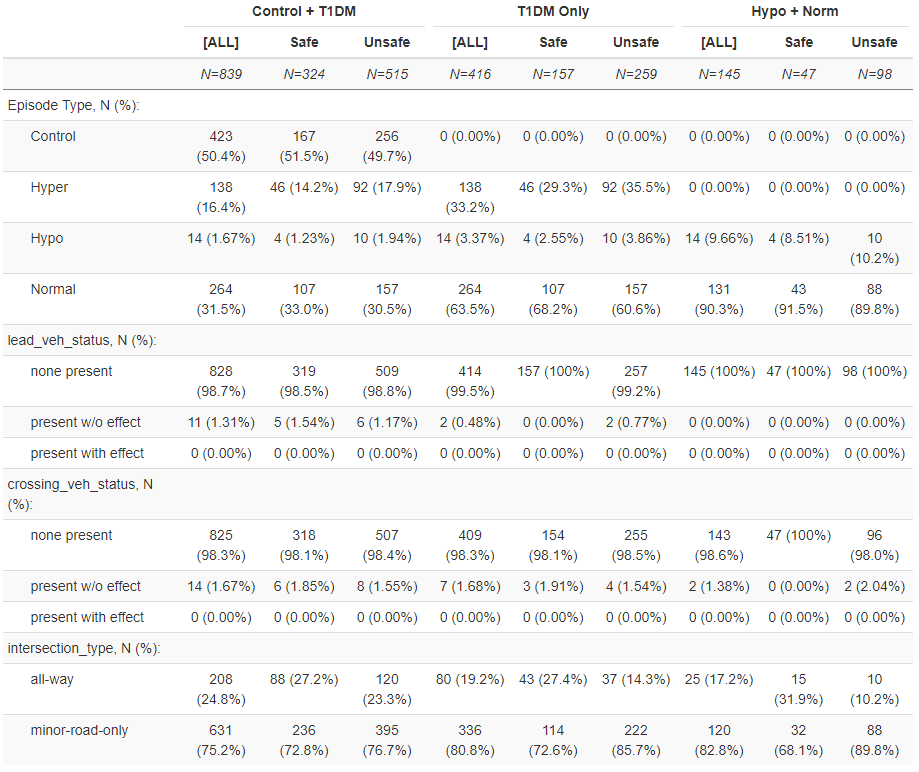 Unfortunately, none of the models that I tested resulted in glycemic episodes being a significant predictor in explaining the stopping responses. In my opinion, this may be due to the low sample size (I cannot increase it because it includes the entire data collection and these are all the stop sign encounters that I found) and low frequency of hypo glycemic episodes (can't increase this frequency either). What other modeling approaches can I use for this data besides mixed-effects modeling? Say after doing all this, the effects of glycemic levels did not turn out to be significant. Will this be a defensible analysis for a paper? (I have drafted the paper, but am not sure if I will face problems publishing it because the effects of interest are non-significant)

Note: It's a novel study and I haven't seen any paper where researchers connected clinical data and naturalistic driving data to model driver behavior. So, can these non-significant finding be reported as a pilot test results?

Statistically insignificant results are not a reason to not publish. Unfortunately many people make this mistake (including reviewers) and that is a big part of the reason for publication bias. Perhaps the effects sizes are interesting in themselves, but if not and if these hypoglycaemic episodes do not actually affect driving behaviour then that is a good thing for safety, is it not ? On the other hand if the study and analysis is severly under-powered then that is a serious problem.

So I think you can look at several things here.

A different approach to mixed effects model is a generalized estimating equations model (GEE). However I doubt there would be much difference in power and the above considerations still apply.

Not the answer you're looking for? Browse other questions tagged r regression logistic mixed-model lme4-nlme or ask your own question.

29
Sample size calculation for mixed models
1
What's the correct analysis to use for a proportional, multinomial, repeated measures DV?
1
Finding changepoints in the movement of a car with respect to a lead car (using ecp package in R)
2
Mixed effects model with 1 observation per level of categorical predictor
0
Dealing with unequal measurements in MLM or ANCOVA
1
Handling cumulative exposure variables in mixed-effects logistic regression (MELR) models
0
Significance of interaction term in Linear Mixed Model