It is shown in answer here and at other places that difference of 2 random variables will be correlated with baseline. Hence baseline should not be a predictor for change in regression equations. It can be checked with R code below:

The plot between x1 (baseline) and change shows an inverse relation: 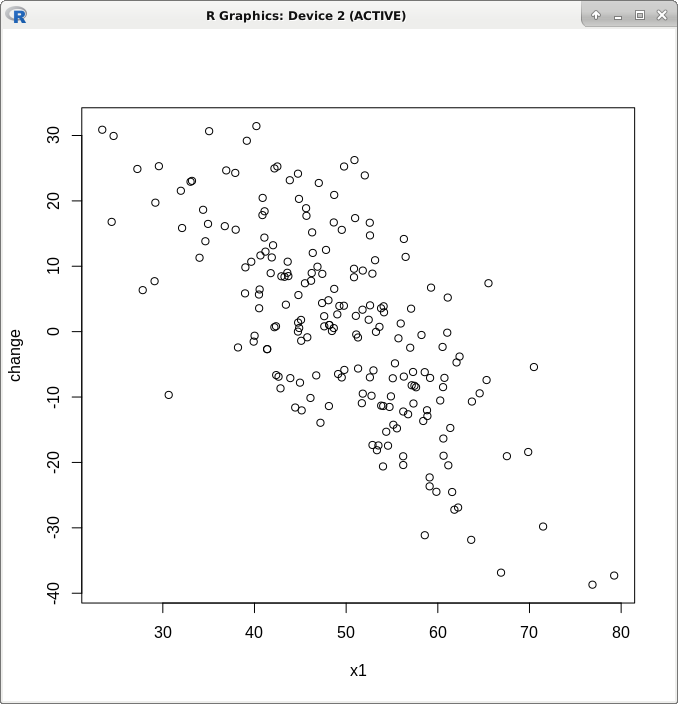 However, in many studies (especially, biomedical) baseline is kept as a covariate with change as outcome. This is because intuitively it is thought that change brought about by effective interventions may or may not be related to baseline level. Hence, they are kept in regression equation.

I have following questions in this regard:

Thanks for your insight.

Edit: I probably should have labelled x1 and x2 as y1 and y2 since were discussing response.

Some links on this subject:

What are the worst (commonly adopted) ideas/principles in statistics?

What are the worst (commonly adopted) ideas/principles in statistics?

We are interested in the covariance of $X$ and $X-Y$ where $X$ and $Y$ may not be independent:

So yes, this is always a problem.

The whole analysis is invalid. The estimate for age is the expected association of age with change while keeping basline constant. Maybe you can make sense of that, and maybe it does make sense but you are fitting a model where you invoke a spurious association (or distort an actual association), so don't do it.

Yes, this is very common as you say. Fit a multilevel model (mixed effects model) with 2 time points per participant (baseline and follow up), coded as -1 and +1. If you want to allow for differential treatment effects and then you can fit random slopes too.

An alternatives is Oldham's method but that also has it's drawbacks.

See Tu and Gilthore (2007) "Revisiting the relation between change and initial value: a review and evaluation" https://pubmed.ncbi.nlm.nih.gov/16526009

Consider an agricultural experiment with yield as the response variable and fertilizers as the explanatory variables. In each field, one fertilizers (can be none also) is applied. Consider the following scenario:

(2) There are 2 fertilizers (say p, k) and on some of the fields, no fertilizer has been applied (this is like placebo in medical experiments). Now here it is more intuitive to set the none-effect as the baseline and take the model as $$y_{ij} = \mu + \alpha_{ij} +\varepsilon_{ij}$$ where $\mu$ accounts for the none effect, $\alpha_1 = 0$ and $\alpha_2, \alpha_3$ have to be interpreted as the "extra" effect of the fertilizers p, k.

Thus, when it seems appropriate to take a baseline, other effects are considered as the "extra" effect of that explanatory variable. Of course we can take a baseline for scenario (1) as well: Define $\mu$ as the overall effect and $\alpha_i$ to be the extra effect of the $i$-th fertilizer.

In medical experiments, sometimes we come accross a similar scenario. We set a baseline for the overall effect and define the coefficients for the "extra effect". When we consider such baseline, our assumption does not remain that the marginal effects are independent. We rather assume that the overall effect and the extra effects are independent. Such assumptions on the model mainly come from field experience, not from a mathematical point of view.

For your example (mentioned in the comments below), where $y_1$ was the height at the beginning and $y_2$ is the height after 3 months, after applying fertilizer, we can indeed have $y_2 - y_1$ as our response and $y_1$ as our predictor. But my point is that in most of the cases, we won't assume $y_1$ and $y_2$ to be independent (that would be unrealistic, because you have applied a fertilizer on $y_1$ to get $y_2$). When $y_1$ and $y_2$ are independent, you get theoretically that they are negatively correlated. But here this is not the case. In fact, in many cases you will find that $y_2-y_1$ is positively correlated with $y_1$, indicating that for greater height of the response, the fertilizer increases the height more, i.e., becomes more effective.

Not the answer you're looking for? Browse other questions tagged r regression correlation change-scores baseline or ask your own question.

57
What are the worst (commonly adopted) ideas/principles in statistics?
5
Difference between Repeated measures ANOVA, ANCOVA and Linear mixed effects model
4
How to properly perform “change from baseline” (pre-post) analysis adjusting for pre using lme4 in R?
4
Controlling for baseline in pre-post between design: using $\Delta(T_2-T_1)$ or controlling for T1 in the regression model (or both)?
2
Analysing change scores via linear mixed effects model with baseline adjustment?
1
Change Score or Regressor Variable Method - Should I regress $Y_1$ over $X$ and $Y_0$ or $(Y_1-Y_0)$ over $X$
1
Keeping baseline as predictor with change score as outcome in this peculiar scenario

2
Correct test for correlation between change and baseline measurement
10
Which bootstrapped regression model should I choose?
2
Whether to use weight or its z-score or percentile?
0
Is there any formal guideline that would indicate the necessity for adjustment for baseline when analysing change from baseline?
2
Analysing change scores via linear mixed effects model with baseline adjustment?
3
Analyzing impact of baseline value on change score using lmm