Is it better to compute Average Precision using the trapezoidal rule or the rectangle method?

Average precision is a popular and important performance metric widely used for, e.g., retrieval and detection tasks. It measures the area under the precision-recall curve, which plots the precision values for all possible detection thresholds against the respective recall values.

A typical precision-recall curve would look somewhat like this. 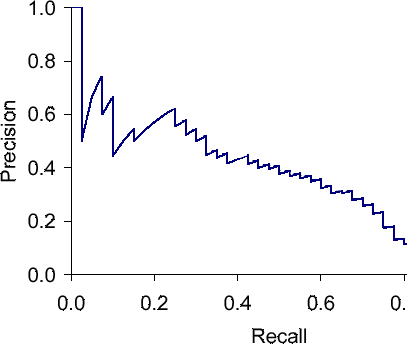 Since there is only a limited number of thresholds to be evaluated on any given finite dataset, the precision-recall curve is a piece-wise linear function. Thus, I always thought the correct way of computing the area under that curve would be using the trapezoidal rule:

Not only I thought so, apparently, since the official code for evaluating results on the Oxford Buildings dataset, which is a widely used benchmark in content-based image retrieval, computes AP in exactly this way, too.

However, the scikit-learn package for Python computes average precision differently in the function sklearn.metrics.average_precision_score, following the definition of AP from Wikipedia. They use the rectangle method:

In the example given above, that would approximate the area under the precision-recall curve with the red function in the following figure: 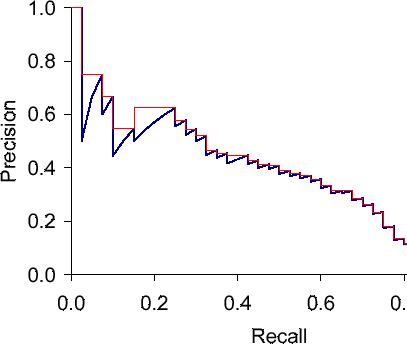 The documentation of scikit-learn says the following about this:

This implementation is different from computing the area under the precision-recall curve with the trapezoidal rule, which uses linear interpolation and can be too optimistic.

One of the curators of the Oxford Buildings dataset, on the other hand, explained in a related question on StackOverflow that the rectangle method would be a "commonly used worse approximation".

Bad enough that different benchmarks and different packages use different variants of Average Precision to compare methods, but now I wonder:

This journal article explains why linear interpolation is both "too optimist" and is also "incorrect," due to the non-linear properties of the Precision-Recall curve: https://www.biostat.wisc.edu/~page/rocpr.pdf

This article is referenced as "[Davis2006]" in the scikit-learn documentation as the explanation as to why linear interpolation is inappropriate and "too optimistic" here. See: https://scikit-learn.org/stable/modules/model_evaluation.html#precision-recall-f-measure-metrics

The function sklearn.metrics.average_precision_score does not use the rectangle rule, or any Riemann sum, right or otherwise. It uses "average precision." The formulas are very different.

Note that f(x) is very, very different than Pi. Due to the formulas for precision and recall, the Average Precision is actually computing an average, with discrete values between 0 and 1. Regarding Riemann, f(x) = y. This gives you the height to multiply the delta with. There is no averaging there.

Average precision is most analogous to the midpoint rule, as they are both doing averages.

As to which method is better, the exact method (trapezoidal) is better if it is computationally feasible. I am not aware of any particular reason why it should not be computationally more expensive than the rectangular method, since the only difference is that it uses the average height of each endpoint instead of the maximum height. If we partition the recall values using the endpoints $r_0 < r_1 < \cdots < r_n$ then we have:

Assuming that these endpoints contain the endpoints of the piecewise linear function, it is simple to show that the trapezoidal area is the exact area under the curve.

Not the answer you're looking for? Browse other questions tagged machine-learning scikit-learn model-evaluation average-precision or ask your own question.