What are the chances rolling 6, 6-sided dice that there will be a 6?

More generally, what is the probability that n n-sided dice will turn up at least one side with the highest number ("n")?

All dice are independent, so

Trust but verify. I like to do so in R:

Looks good. Try this with other values of nn. Here is a plot: 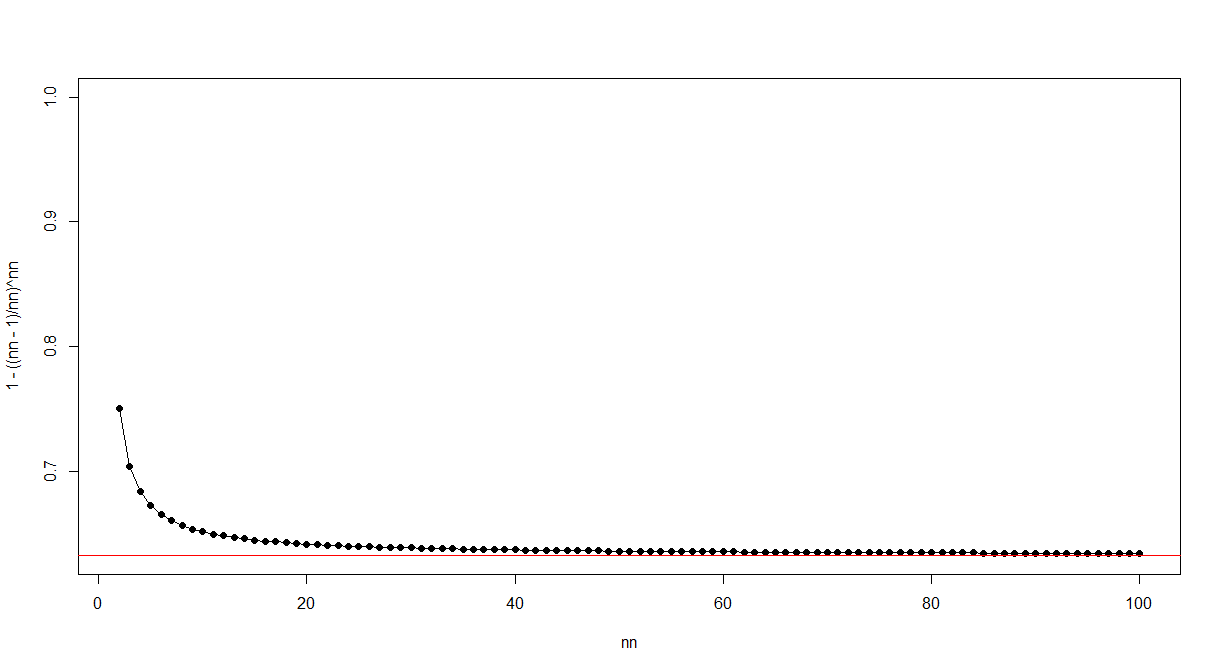 We note how our probability in the limit is

because of an identity involving $e$.

Answers by @StephanKolassa (+1) and @gunes (+1) are both fine. But this problem can be solved with reference to binomial and Poisson distributions as follows:

The answer can be arrived at by purely counting the described events as well, although the accepted answer is more elegant. We'll consider the case of the die, and hopefully the generalization is obvious. We'll let the event space be all sequences of numbers from $\{1,2,...,6\}$ of length $6$. Here are a few examples (chosen at random):

The point is, our space has a total of $6^6$ events, and due to independence we suppose that any one of them is as probable as the other (uniformly distributed). We need to count how many sequences have at least one $6$ in them. We partition the space we are counting by how many $6$'s appear, so consider the case that exactly one $6$ appears. How many possible ways can this happen? The six may appear in any position (6 different positions), and when it does the other 5 postions can have any of 5 different symbols (from $\{1,2,...,5\}$). Then the total number of sequences with exactly one $6$ is: $ \binom{6}{1}5^5 $. Similarly for the case where there are exactly two $6$'s: we get that there are exactly $\binom{6}{2}5^4$ such sequences. Now it's time for fun with sums:

To get a probability from this count, we divide by the total number of events:

I think that this generalizes pretty well, since for any $n$ other than $6$, the exact same arguments holds, only replace each occurrence of $6$ with $n$, and $5$ with $n-1$.

It's also worth noting that this number $5^6 = \binom{6}{0}5^6$ is the contribution of sequences in which no $6$ occurs, and is much easier to calculate (as used in the accepted answer).

I found BruceET's answer interesting, relating to the number of events. An alternative way to approach this problem is to use the correspondence between waiting time and number of events. The use of that would be that the problem will be able to be generalized in some ways more easily.

Viewing the problem as a waiting time problem

This correspondence, as for instance explained/used here and here, is

This approach relates many distributions.

and we are looking for the situation $m=n$ so you get:

Generalizations, when $n \to \infty$

The first generalization is that for $n \to \infty$ the distribution of the number of events becomes Poisson with factor $\lambda$ and the waiting time becomes an exponential distribution with factor $\lambda$. So the waiting time for rolling an event in the Poisson dice rolling process becomes $(1-e^{-\lambda \times t})$ and with $t=1$ we get the same $\approx 0.632$ result as the other answers. This generalization is not yet so special as it only reproduces the other results, but for the next one I do not see so directly how the generalization could work without thinking about waiting times.

Generalizations, when dices are not fair

So say a dice does not have a constant probability $p = 1/n$, but instead it is drawn from a beta distribution with a mean $\bar{p} = 1/n$ and some shape parameter $\nu$

Then the number of events for a particular dice being rolled $n$ time will be beta binomial distributed. And the probability for 1 or more events will be:

I can verify computationally that this works... 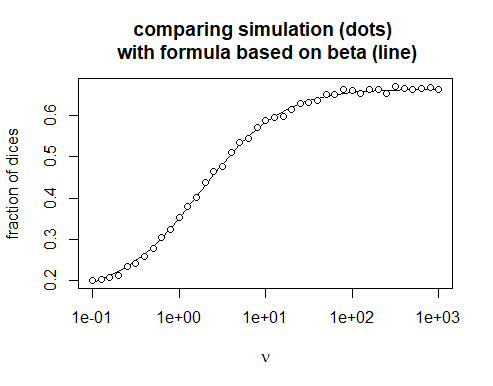 .... But I have no good way to analytically solve the expression for $n \to \infty$.

Now that integral term is related to the moment generating function (with $t=-1$). So if $\lambda$ is normal distributed with $\mu = 1$ and variance $\sigma^2$ then we should use:

These dice rolls are a toy model. Many real-life problems will have variation and not completely fair dice situations.

For instance, say you wish to study probability that a person might get sick from a virus given some contact time. One could base calculations for this based on some experiments that verify the probability of a transmission (e.g. either some theoretical work, or some lab experiments measuring/determining the number/frequency of transmissions in an entire population over a short duration), and then extrapolate this transmission to an entire month. Say, you find that the transmission is 1 transmission per month per person, then you could conclude that $1-1/e \approx 0.63 \%$ of the population will get sick. However, this might be an overestimation because not everybody might get sick/transmission with the same rate. The percentage will probably lower.

However, this is only true if the variance is very large. For this the distribution of $\lambda$ must be very skewed. Because, although we expressed it as a normal distribution before, negative values are not possible and distributions without negative distributions will typically not have large ratios $\sigma/\mu$, unless they are highly skewed. A situation with high skew is modeled below: 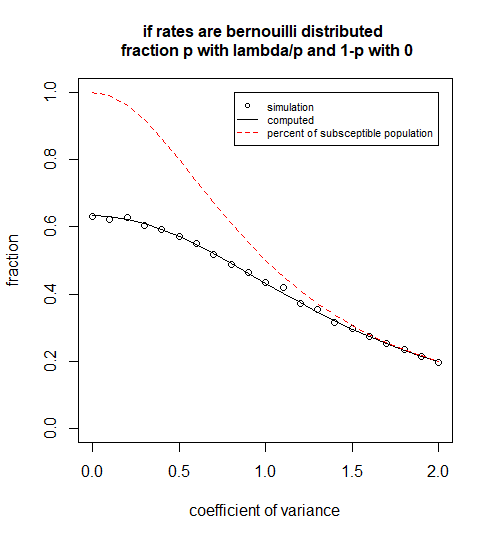 The consequence is. Say you have high $n$ and have no possibilities to observe $n$ dice rolls (e.g. it takes to long), and instead you screen the number of $n$ rolls only for a short time for many different dice. Then you could compute the number of dices that did roll a number $n$ during this short time and based on that compute what would happen for $n$ rolls. But you would not be knowing how much the events correlate within the dice. It could be that you are dealing with a high probability in a small group of dice, instead of an evenly distributed probability among all dice.

This 'error' (or you could say simplification) relates to the situation with COVID-19 where the idea goes around that we need 60% of the people immune in order to reach herd immunity. However, that may not be the case. The current infection rate is determined for only a small group of people, it can be that this is only an indication for the infectiousness among a small group of people.

Simplify and then extend. Start with a coin. A coin is a die with 2 sides (S=2).

The exhaustive probability space is

Two possibilities. One satisfies the condition of all heads. So your odds of all heads with one coin (n=1) are 1/2.

8 possibilities. Only one fits the criteria - so 1/8 chances of all heads.

Not the answer you're looking for? Browse other questions tagged probability games dice or ask your own question.

42
How often do you have to roll a 6-sided die to obtain every number at least once?
8
Number of events in a segment if waiting times are drawn from a mixture of two exponential distributions
2
How to generate random numbers normally distributed in R or any software with limitations (bounds)?
4
Limit distribution associated with counts (non-trivial combinatoric problem)
4
Halving time for a population of dice
1
How to get this analytical results for probability of wait times

4
Odds of rolling doubles or triples given N 6-sided dice
17
What is the distribution for various polyhedral dice all rolled at once?
22
How do we know that the probability of rolling 1 and 2 is 1/18?
2
Are there any other ways of computing theoretical probability of combined events without listing ALL the possible outcomes?
1
Number of rolls to get my desired result with a set probability
4
minimum number of rolls necessary to determine how many sides a die has
2
Random Variables - Rolling two fair six-sided dice
2
What is the probability that the third largest value of 39 rolls with a 9-sided dice is 8?