I wanted to ask a question inspired by an excellent answer to the query about the intuition for the beta distribution. I wanted to get a better understanding of the derivation for the prior distribution for the batting average. It looks like David is backing out the parameters from the mean and the range.

You can check this answer in R:

I wanted to add this as a comment on the excellent answer but it ran long and will look better with answer formatting.

Using the same reasoning as David, we can express

Notice the relationship to a corresponding Bernoulli RV. The Beta distribution with mean $\mu$, since it is forced to take all values between 0 and 1, must be less dispersed (i.e., have lower variance) than the Bernoulli RV with the same mean (which has all of its mass at the ends of the interval). In fact, sending $\alpha$ to 0 and fixing $\beta = \frac{1-\mu}{\mu} \alpha$ amounts to putting more and more of the mass of the PDF close to 0 and 1, i.e., getting closer to a Bernoulli distribution, which is why the supremum of the variance is exactly the corresponding Bernoulli variance.

Taken together, here is the set of valid means and variances for Beta: 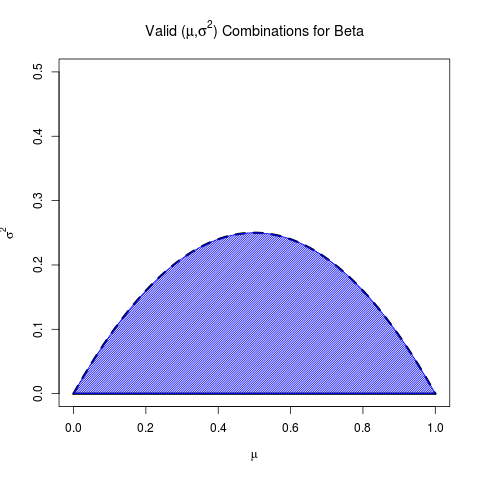 (Indeed this is noted on the Wikipedia page for Beta)

Not the answer you're looking for? Browse other questions tagged bayesian prior or ask your own question.

535
What is the intuition behind beta distribution?
1
Prior sensitivity analysis: The case of a Beta prior

9
Bayesian inference for multinomial distribution with asymmetric prior knowledge?
4
How do we pass from proportionality back to equality in a Bayesian derivation?
0
Bayesian inference with conjugate priors - triplot
1
How do we know that our estimate of the mid-season batting average is actually good?
2
Bayesian evidence
2
Marginal prior derivation in hierarchical Bayesian model
6
What happens if I change the range of a flat prior for Bayesian inference?