How to generate random numbers normally distributed in R or any software with limitations (bounds)?

I am working on a project where I need to generate random numbers for a given task time which is normally distributed with mean = 40, and standard deviation = 150.

Because of the high SD, I will get some negative values and low values when I generated numbers directly which is unrealistic.

Is there any way where I can generate random numbers normally distributed with limitations (i.e. bounds)?

This sounds like you want to sample from truncated normal distribution. If you only want to truncate the tails of the distribution (regions with low probability), than the approach suggested by Dave is probably enough. In other cases it might however quickly get inefficient. Better approach was suggested by Christian P. Robert in

The algorithm is a bit more complicated, so I suggest you check the paper. Alternatively, if you prefer the code here you can find a C++ implementation from R package extraDistr (disclaimer: it's written by me).

I could imagine something where you use some if/else logic to screen for unrealistic values. There would be some kind of recursion where you keep drawing random numbers u til you’ve gotten 1000 (or whatever) realistic values. Some pseudocode:

This will keep drawing random numbers for observation i until it gets a realistic value.

Note that you are not simulating normal data if you do this, as any real number is technically possible for any normal distribution, and you eliminate some values.

While your question is not entirely clear about what you are trying to achieve (how do you wish to go from a Gaussian distribution to a distribution that is truncated at 0?)...

... I thought that it was interesting to show something about the limit of the ratio between the mean and standard deviation of a Gaussian distribution that is truncated at $x=0$. (this issue has been mentioned in some of the comments)

Below is a piece of code and a graph that shows the computation of Gaussian distributions that have been truncated at different z-values (and shifted and re-scaled appropriately in order to have the truncating occur at $x=0$ and have the population mean equal to $\bar{x} = 40$). 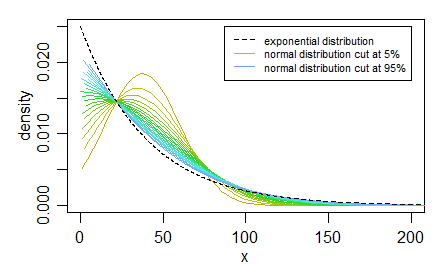 For the equations used to compute the mean and variance of the truncated normal distribution see: https://en.wikipedia.org/wiki/Truncated_normal_distribution

Not the answer you're looking for? Browse other questions tagged probability distributions mathematical-statistics bounds hypothesis-testing or ask your own question.

9
What are the chances rolling 6, 6-sided dice that there will be a 6?
11
Is this correct ? (generating a Truncated-norm-multivariate-Gaussian)
10
Simulate from a truncated mixture normal distribution
3
Sampling distribution of the mean of the discrete-power law distribution

43
Fake uniform random numbers: More evenly distributed than true uniform data
23
What's the probability that from 25 random numbers between 1 and 100, the highest appears more than once?
3
Sum of 2 Normally Distributed Random Variables With a Correlation
5
Standard deviation for a half-normal distribution
3
Synthetic data set generation for binary classification based on paper (interpretation problem)