I'm working on a project involving using machine learning to figure out optimal strategies to play board games, and after a few rolls of the virtual dice a thought hit me:

For the games that involve randomness, such as those with dice, there can be significant value in predicting future dice rolls. And the rolls themselves are not, of course, truly random. Given this, do I reasonably have to fear that after learning through all the low-hanging fruit as far as gameplay is concerned, my ML models may try to optimize for the specific random number generator I am using, such as by predicting future rolls?

If so, would a cryptographically-secure random number generator be necessary to obviate this, or are there computationally-cheaper alternatives that offer the same protection from ML "gaming the system" in this way?

Edit: My original answer below is mostly informal, but I want to address some of the comments in a more technical and hopefully convincing manner. Please see the technical appendix for these details.

Could a capable machine learning model accidentally be trained from data generated by the PRNG to predict the output. Almost certainly not, though the probability of this is non-zero. Could we successfully create and train a custom machine learning model with the sole purpose of predicting the output of a PRNG? Also probably not, at least not without a great deal of "cheating."

The key point is that even if a machine learning model is capable of representing the PRNG, it has to be capable of finding the right parameters to predict the output of the PRNG. Training a machine learning model to predict the output of a PRNG is an extremely difficult task, bordering on the impossible. To understand why, let's first talk about how a PRNG works.

for some function $g$ and constant $m \in \mathbb{N}$. There are some slight variations on the method, and of course some methods which are completely different, such as cellular automata-based methods (like Wolfram's Mathematica uses by default). To answer your question, I'm going to focus on one of the simplest PRNGs: the linear congruential method, which uses the function $g(x) = ax + c$ for some integer constants $a$ and $c$. This method is used by the Java programming language, even though it has relatively poor statistically properties. I'm then going to appeal to intuition to claim that, if we don't have to worry about a machine learning algorithm learning how to predict the output of a very simple PRNG with poor statistical properties, we probably don't have to worry about it learning how to predict the output of a fancy PRNG with better statistical properties.

This is the first difficulty that our machine learning model has to surmount. There is already an excellent discussion of this problem on this stackoverflow post which you should read before continuing this post any further.

Hopefully you aren't reading this unless you poked through the linked post. Note that the best solutions use recurrent neural networks (RNN), with the motivation explained in the accepted answer:

Please understand that this solution is a bit of a tongue-in-cheek thing, because it is based on the task-domain knowledge that our target function can be defined by a simple recurring formula on the sequence of input bits.

In reality, if we aren't using domain knowledge for this problem (for instance, if you're designing your model to play a dice game) then the model might not be able to learn the $x$ mod $m$ function. You could test this by using your model architecture and applying it to this problem directly to see if you can get good results.

Okay, so maybe learning $x$ mod $m$ is difficult, but as the stackoverflow answer above demonstrates, it is doable. So what's the next hurdle? Let's talk about the training of a model, i.e. the finding of the parameters that best fit the data.

The "magic" of modern machine learning is very much reliant on the fact that convex optimization techniques like gradient descent seem to "just work" even when applied to non-convex optimization problems. They don't work perfectly, and often require a fair amount of tinkering to train properly, but they can still get good results. One of the reasons for this "magic" is that lots of cost functions, while non-convex, aren't that non-convex. For example, your cost function might look something like: 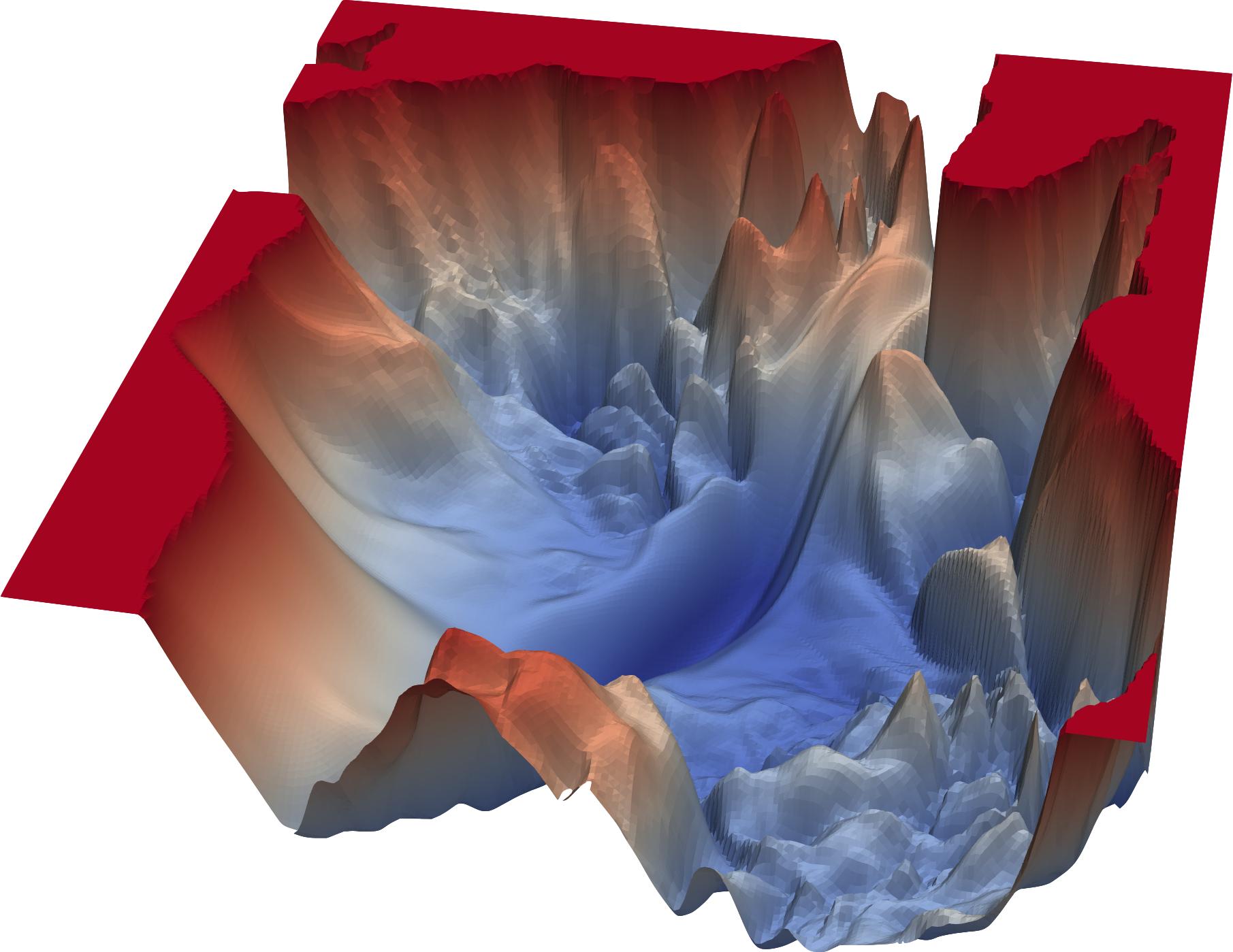 This cost function might look bad at first glance, but notice that it has some degree of regularity/smoothness. You can still tell that the underlying function is continuous because "small" movements along the $x$ or $y$-axis result in "small" changes in height. You can also pick out a general basin-shaped structure, and it's believable that a convex optimization algorithm with some random perturbations could eventually find the global minimum.

Essentially, a cost function with some regularity might not be convex, but can still be "locally convex" in some sense. This means that gradient descent can find a local minimum if the initial point is within a locally convex "basin." In other words, being close the minimum counts for something, so "partial" correctness can be rewarded.

Indeed, this is the idea behind transfer learning. Finding a good minimum for one task that is sufficiently similar to another task can provide the second task with a good initial point and then convex optimization can fine-tune the result to find a nearby minimum for the second task.

However, the cost function for trying to learn a PRNG has virtually no regularity whatsoever. It shouldn't come as a shock, but the cost function behaves like noise. But don't take my word for it: let's do an experiment to try to predict the output of Java's PRNG.

For this experiment, we're going to cheat as much as possible and still lose. To start with, instead of using some kind of neural network or other machine learning model with a large number of parameters, we're going to use the exact functional form that we know Java's PRNG takes:

which has parameters $a$, $c$, $m$, and $X_0$. This completely sidesteps the difficulty of learning $x$ mod $m$ discussed above. And our model has only four parameters! Modern machine learning algorithms can have hundreds of millions of parameters that require training, so just four should be a piece of cake, right?

Let's make it even easier though: suppose that an oracle (no pun intended) tells us three of four correct parameters for Java's PRNG, and our task is simply to learn the value of the fourth. Learning one parameter can't be that hard, right? 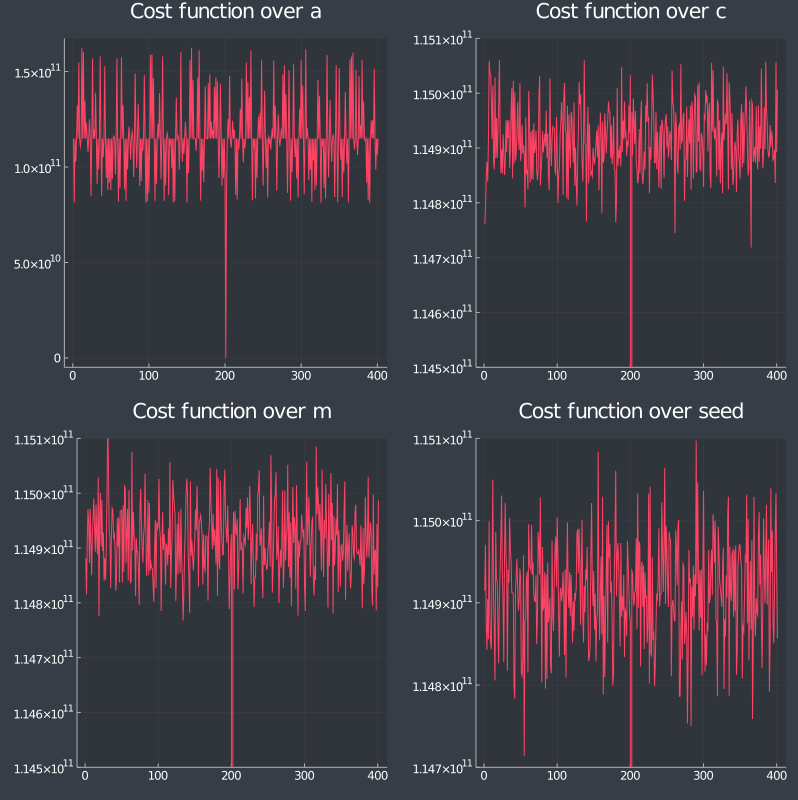 So you can clearly see that even with three of the four parameters and the exact functional form known, the cost function still has the form $c + (\text{noise})$ where $c$ is a constant. In this case, a gradient-descent-type algorithm would compute a gradient of $0 + (\text{noise})$. Then gradient descent is simply performing a random walk. While possible that a random walk could converge to correct parameters, it is extremely unlikely given that the size of the space is $10^{77}$ (see below). Without any regularity, convex optimization tools are no better than a random walk looking for that one "valley" in the middle of each graph where the correct parameter lies.

It turns out that even with all of this simplification, the last step is still virtually impossible. "Learning" the last parameter boils down to a brute force search over the entire range of possible values for the parameters, because the "magic" of applying convex optimization techniques to train a machine learning model does not help solve a search problem when the cost function does not have any information whatsoever about the direction of even a good local minimum. If you wanted to try every possible 64-bit integer for the four parameters, this would mean searching through $(2^{64})^4 = 2^{256} \approx 10^{77}$ combinations. And this is just for a very simple PRNG.

Ultimately, if you really want to alleviate any worries you might have about your particular task, you could always drop the board game aspect and see if your model can learn the output of the pseudo-random dice roll using your programming language's PRNG. Good luck (you're going need it)!

First, I want to point out that the function $x$ mod $m$ being difficult to approximate is more of an interesting side note, relevant mostly for the concern in the original question that a machine learning algorithm might incidentally discover how to predict the output of the PRNG while being trained for some other purpose. The fact is that it is difficult even when this is one's sole purpose. Difficult, but not unreasonably difficult. You don't need to appeal to universal approximation theorem to claim this is possible, because in the linked stackoverflow post from above there are several examples of models that successful approximated $x$ mod $m$ (albeit with the input in binary-vector representation). So not only was it possible to represent the function $x$ mod $m$ by a neural network (which is all the UAT guarantees), they were also able to successfully find weights that worked (which is not guaranteed).

Plotted below is a much larger scale experiment on the interval $[-9 \times 10^{12}, 9 \times 10^{12}]$ that shows essentially the same phenomenon as before. For this experiment, I only tested the case where the seed is unknown as this experiment took a much longer. Each point here is not the cost function, but the local average $\text{Avg} (100, t)$ of the cost function, which smooths out some of the noise: 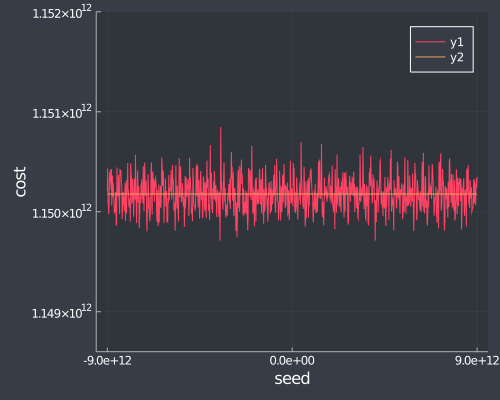 Ultimately, this is a problem for gradient-based optimization methods not because of the noise term per se, but because the cost function is "flat." Of course, when you do add in the noise term, a flat function plus noise makes an extremely large number of local minima that certainly doesn't help the convergence of any gradient-based optimization algorithm.

Moreover, I am well aware that this is an empirical claim, and I can not prove it analytically. I just wanted to demonstrate empirically that the gradient for this function is essentially 0 on average, and contains no information about the direction of $x^*$. In Experiment 1, the neighborhood was purposefully small to demonstrate that even if you started close to $x^*$, there is no visible gradient pointing in that direction. The four slices of the neighborhood $B_{200} (x^*)$ are small, but still don't show a local "basin" (locally approximately convex region) of the sort that gradient-based optimization is good at minimizing in. Experiment 2 demonstrates this same phenomenon on a much larger scale.

The last technical detail I want to touch on is the fact that I am only analyzing the the model and the cost function as functions over a subset of the domain $\mathbb{Z}^4$, not over $\mathbb{R}^4$. This means that the gradient/derivative is not defined. So how can I claim something about the convergence or non-convergence of a gradient-based method when gradients aren't defined? Well, we can of course try fitting a differentiable model defined on $\mathbb{R}^4$ to the data, and compute its derivative, but if the data is already "flat" a model that fits it well will be "flat" as well.

Not the answer you're looking for? Browse other questions tagged machine-learning random-variable random-generation games or ask your own question.