What would be the probability distribution to simulate K events randomly assigned to N individuals?

I am trying to randomly simulate a population of $N$ individuals among which a predefined number $K$ of them have an outcome. The trick is that I want to assign different probabilities to the individuals such that some are more 'at risk' than the others.

I tried using the R function sample without replacement to draw the indices of individuals having the outcome. However, for some reason, the obtained proportions in the end are not quite right.

Another way to put the problem is that I would like a distribution such as the multinomial one, but for which the count can't be larger than one for each category.

Is there such a distribution?

I bet the recode part could be done much better than my inelegant ifelse()-structure.

If each individual from the population has a probability $p_i$ to have a certain characteristic, draw the outcome for each of the $N$ individuals and accept the result if exactly $K$ enjoy the outcome. Something like

You can do it by computing a randomly variating probability for each individual to have the condition.

This example gave the output below from which you can see that group 2 has a higher probability of getting the condition and also has visibly more cases. You can change the function for the random variation and the threshold for getting the condition to adjust the simulation to your needs. 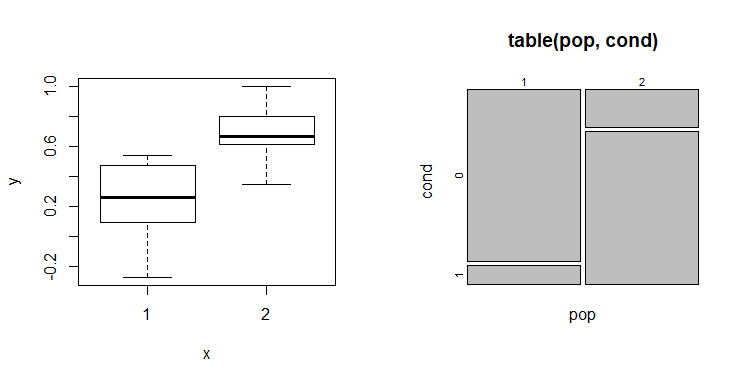 Not the answer you're looking for? Browse other questions tagged sampling simulation multinomial or ask your own question.

1
How to generate Normal variables parts of which are correlated (in R)?