Why do model weights become less explainable with more training?

For example, I was using a logistic regression on the Fashion-MNIST dataset. This is using sklearn, which uses an iterative training approach, and I was experimenting with the number of iterations. (This is with no regularisation, and using the "multinomial" approach to multiclass, though one-versus-rest yields the same thing.) Here are what the coefficients look like for each class, for different numbers of training iterations: 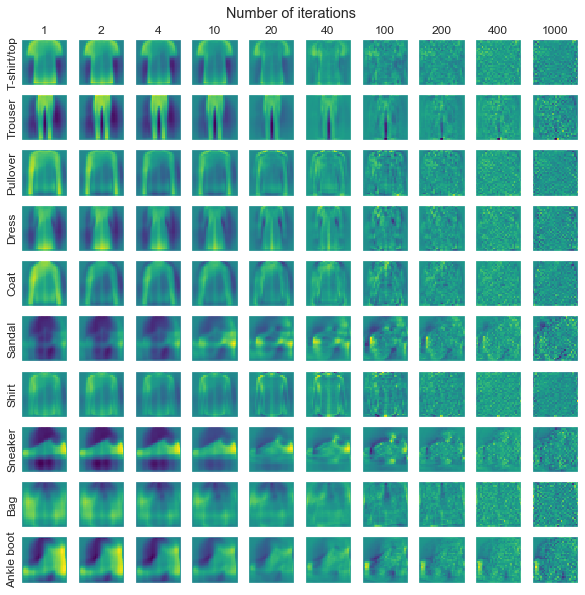 The range of coefficients is increasing with number of iterations:

And here are the training and validation accuracies at each number of iterations:

What surprises me is that the coefficients become less explainable and intuitive with more iterations of training. For example, for T-shirts, after one training iteration, the coefficients take the shape of a T-shirt. It makes intuitive sense that the dot product of this with an image of a shirt will result in a high value. However, with more training iterations, this shape fades away until the coefficients look like unintepretable noise. One might suspect the model is simply overfitting, but validation accuracy does not start decreasing until after iteration 200, at which point the T-shirt shape is indistinguishable, and even then the overfitting is slight after that point.

What is the explanation for this phenomenon? Has the effect been discussed in the literature (does it have a name)?

The coefficients after a large number of iterations remind me of the coefficients that are typically learned by neural networks; is there a connection there?

There are two phenomena happening here:

The weight images become “less explainable” at first because they start to include less typical features. The weight for each pixel is initialized such that all the classes are equally likely. As a result, on the first iteration, you have all the training images of the correct class superimposed and all the images of the incorrect training classes subtracted. The result in this case looks like a typical example of the class. Look at the trousers for example. It looks like an average of all the trousers because that’s actually what it is! [1] (Ignoring the contribution of non-trousers examples) The problem is this does a poor job of identifying many training examples, for example, shorts.

As the model is trained, the typical examples are soon predicted accurately, so they have less influence on the gradient of the cost function. Instead, the gradient of the cost function is dictated by examples that are harder to predict. So changes in the weight images will be due to less-common features. Unless you study the training set carefully, it would be hard to explain the pixel weights because they are training on less-typical features.

Starting at 100 iterations, you have overfitting which is evident from the falling validation accuracy and the increasing noise in the weight images. Without regularization, any pixel can have an arbitrarily large effect on the activation of some class. We know this is wrong, but the model doesn’t know unless we impose regularization.

$\alpha$ is the learning rate for gradient descent, and the partial derivative $\partial J(\theta)/\partial \theta_j$ dictates how weight $\theta_j$ changes.

$J: \mathbb{R}^n \to \mathbb{R}$ is the cost of the training data given the parameters in column vector $\theta$. In the case of logistic regression without regularization we use the negative log-likelihood. This results in the partial derivative:

Not the answer you're looking for? Browse other questions tagged interpretation regression-coefficients or ask your own question.