I am trying to determine if wildfires occur closer to forests or not. For this, I have two matrices with the same shape:

Following the approach of Kumar et al. (2014), I extracted two different groups of distances to compare:

and ran a two-sample Kolmogorov-Smirnov test to check whether the two groups of distances belong to the same distribution.

For some context, here is a plot with the ECDFs of the first group of distances (red) and the second (blue). 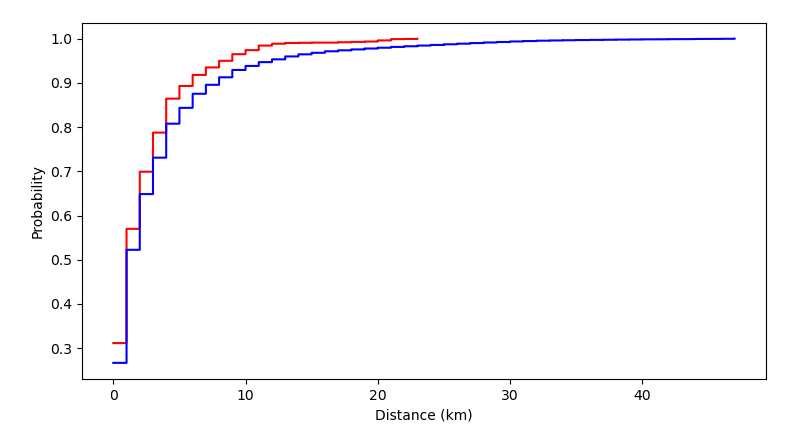 Should anyone would want to access the data and reproduce the test, here is a link to download it and a small R snippet to load it:

I got the following result for the Kolmogorov-Smirnov test:

My interpretation, taking a look at the small p-value, is that the test suggests that both groups of distances belong to different distributions. However, the D statistic relatively small, suggesting that they might belong to the same distribution after all. Also, given the nature of the data, there are many ties. I'm wondering if there is a better approach to achieve my objective.

I took a look at a similar question and one of the answers suggests using a Chi-Squared test. As the groups of distances do not share the same size (N), I'd think this is not a possibility.

Furthermore, I have other study areas and in some cases the distributions seem to match, in other fires appear to occur closer to the forest and in other fires appear to occur farther from the forests. Is there any test that can statistically tell me whether the distributions are "smaller" (closer), "larger" (farther) or similar?

After thinking about this a bit I would propose the following:

1 - simply plot a histogram to see if fires are occurring closer to forests. Looking at the shape would be a first sniff-test.

2 - if the histogram is suggesting the pattern is present, then I would be asking, “is this coincidence or real?”. My biggest question is from the fact that not all parcels of land are created equally. I would want to also look at other questions like:

If you don’t have this info, but you have a picture, you could simply use RGB values as surrogates.

Then, I would throw all those variables into a logistic regression. With y being fire/no fire and X’s being the predictor variables including distance the the nearest forest. You might want to look into a GLMM where image could be the random effect.

If the coefficient on distance looks reasonably significant, then you’re looking good and you have controlled for some confounding covariates.

Now, the probability of fire as a function of distance to a forest may not be linear. But I still think the regression approach would be reasonable.

This is just my 2 cents on an approach. Hope this helps with your project!

Not the answer you're looking for? Browse other questions tagged r distributions chi-squared kolmogorov-smirnov or ask your own question.